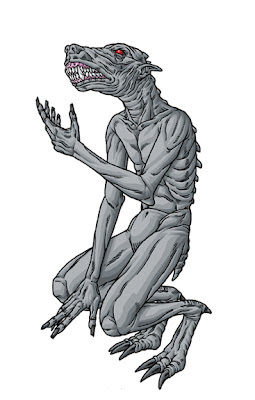 GHOUL
"The madness and monstrosity lay in the figures in the foreground- for Pickman's morbid art was pre-eminently one of demoniac portraiture. These figures were seldom completely human, but often approached humanity in varying degree. Most of the bodies, while roughly bipedal, had a forward slumping, and a vaguely canine cast. The texture of the majority was a kind of unpleasant rubberiness."
H.P. Lovecraft, Pickman's Model

"All these things Carter glibbered to the assembled ghouls, and presently outlined that request which he had in mind, and which he did not think extravagant considering the services he had so lately rendered the rubbery, dog-like lopers."
H.P. Lovecraft, The Dream-Quest Of Unknown Kadath