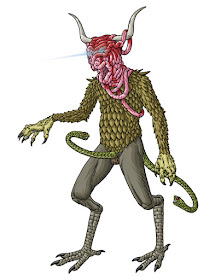 HUMBABA
"The dog was a bit on the small side, but it was a definite improvement on Doug and his girlfriend's first try - a week back, when they'd actually tried to fob me off with some store-bought puppy. Through long and clever argument, however, I'd finally gotten them to cave in: If you're looking to evoke a deity who speaks through a face made of guts - one who goes by the slightly risible name of Humbaba, to be exact - you'd probably better make sure his mouth is big enough to tell you what you want to hear."
Gemma Files, The Narrow World

Huwawa (Humbaba) was a monster who guarded the pine forest. His face resembled coiled intestines, and he possessed killer rays."
Stephanie Dalley, Myths from Mesopotamia: Creation, The Flood, Gilgamesh, and Others

"Humbaba, whose shout is the flood-weapon, Whose utterance is Fire and whose breath is Death, Can hear for up to sixty leagues the sounds of his forest."
Gilgamesh, Tablet III

"Gilgamesh proposes an expedition to the Cedar Forest and is not put off by Enkidu’s first-hand knowledge of its terrible guardian, the ogre Humbaba."
A.R. George, The Epic Of Gilgamesh

"Humbaba is the name of a monstrous giant guardian in the mythology of ancient Mesopotamia. Humbaba, also known as Huwawa and Kumbaba, is the guardian of the cedar forests and may originally have been a deity of nature. It was described as having a vast humanoid body with scale plates all over it, with the legs of a lion ending in vulture's talons' on its head were horns like those of a bull; the tail was long and had a snake's head at the end."
Carol Rose, Giants, Monsters and Dragons