THE SHADOW IN THE SHED 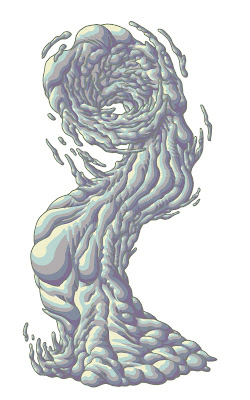 THE SHADOW IN THE SHED
"And this Shadow, or whatever it was, was a most peculiar and unusual thing. It seemed circular in shape, tubelike; about five feet through, as near as they could tell, it extended from the dirt floor of The Shed clear to the roof, and up beyond the rafters inside it was too dim to see clearly."

"The thing was of a nondescript color, mostly gray."

"He began poking at two shiny objects, working them across the close-packed dirt floor, ignoring the Shadow, which was rippling and twisting as though annoyed by the intrusion."

"Suddenly they stopped short, for the Shadow now seemed subtly different. More colorful, more solid, and a movement to it that was sort of....an aliveness!"

The strange and evil mistiness was curling and entwining itself all about and around the cow. Thicker and thicker grew the folds of Shadow-substance."