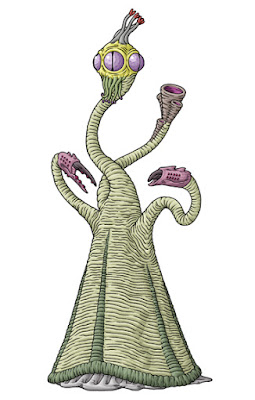 YITHIAN
"The Great Race's members were immense rugose cones ten feet high, and with head and other organs attached to foot-thick, distensible limbs spreading from the apexes. They spoke by the clicking or scraping of huge paws or claws attached to the end of two of their four limbs, and walked by the expansion and contraction of a viscous layer attached to their vast, ten-foot bases."

"These members were sometimes contracted almost to nothing, and sometimes extended to any distance up to about ten feet. Terminating two of them were enormous claws or nippers. At the end of a third were four red, trumpetlike appendages. The fourth terminated in an irregular yellowish globe some two feet in diameter and having three great dark eyes ranged along its central circumference. Surmounting this head were four slender grey stalks bearing flower-like appendages, whilst from its nether side dangled eight greenish antennae or tentacles. The great base of the central cone was fringed with a rubbery, grey substance which moved the whole entity through expansion and contraction."
H.P. Lovecraft, The Shadow Out Of Time

Email ThisBlogThis!Share to TwitterShare to FacebookShare to Pinterest
Labels: H.P. Lovecraft, The Shadow Out Of Time, Yithian