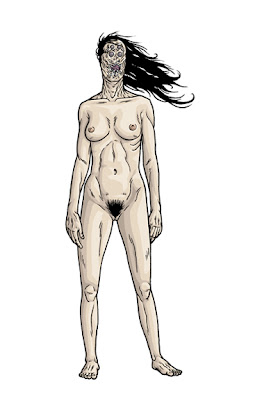 SUCCUBA
"In an instant every moving entity was electrified; and forming at once into a ceremonial procession, the nightmare horde slithered away in quest of the sound—goat, satyr, and aegipan, incubus, succuba, and lemur, twisted toad and shapeless elemental, dog-faced howler and silent strutter in darkness—all led by the abominable naked phosphorescent thing that had squatted on the carved golden throne, and that now strode insolently bearing in its arms the glassy-eyed corpse of the corpulent old man."
H.P. Lovecraft, The Horror At Red Hook

"Succubus. A devil in female form, the succubus specializes in seducing men. Although feminine in meaning, in form this medieval Latin word, succubus, is masculine (because demons were supposedly sexless); the feminine form succuba (strumpet) is occasionally found."
Rossell Hope Robbins, Encyclopedia Of Witchcraft & Demonology

Posted by Michael Bukowski at 10:06 AM 2 comments: 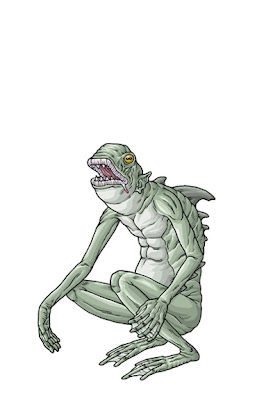 IBIAN
"It is written on the brick cylinders of Kadatheron that the beings of lb were in hue as green as the lake and the mists that rise above it; that they had bulging eyes, pouting, flabby lips, and curious ears, and were without voice."
H.P. Lovecraft, The Doom That Came To Sarnath

Posted by Michael Bukowski at 10:07 AM No comments:

Email ThisBlogThis!Share to TwitterShare to FacebookShare to Pinterest
Labels: H.P. Lovecraft, Ibian, The Doom That Came To Sarnath

THINGS THAT DEVOUR AND DISSOLVE 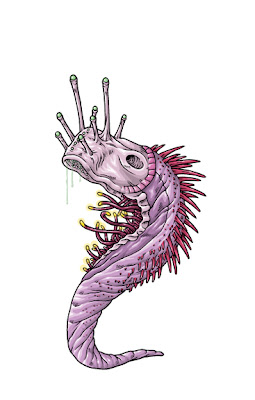 THINGS THAT DEVOUR AND DISSOLVE
"You think those floundering things wiped out the servants? Fool, they are harmless! But the servants are gone, aren’t they?"

"Things are hunting me now—the things that devour and dissolve—but I know how to elude them."

"My pets are not pretty, for they come out of places where aesthetic standards are—very different. Disintegration is quite painless, I assure you—but I want you to see them. I almost saw them, but I knew how to stop."
H.P. Lovecraft, From Beyond

Posted by Michael Bukowski at 10:42 AM 3 comments:

Email ThisBlogThis!Share to TwitterShare to FacebookShare to Pinterest
Labels: From Beyond, H.P. Lovecraft, Things That Devour and Dissolve 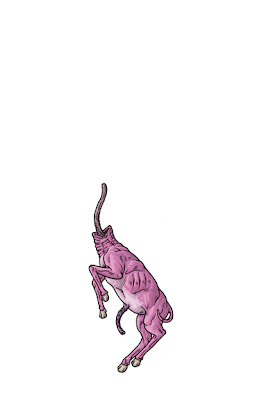 HEADLESS MOON-CALF
"Incubi and succubae howled praise to Hecate, and headless moon-calves bleated to the Magna Mater. Goats leaped to the sound of thin accursed flutes, and aegipans chased endlessly after misshapen fauns over rocks twisted like swollen toads."
H.P. Lovecraft, The Horror At Red Hook

"Mooncalf was a term formerly ascribed to the abortive fetus of a cow or other farm animal, and also occasionally to that of a human. The term arose from the formerly widespread belief, present in many European folk traditions, that such malformed creatures were the product of the sinister influence of the moon on fetal development."
Webster's Dictionary

Posted by Michael Bukowski at 11:46 AM 4 comments: 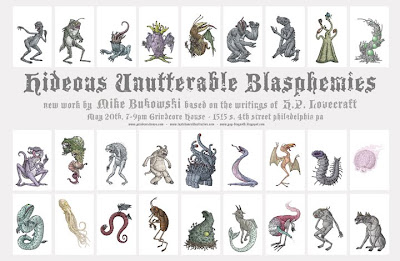 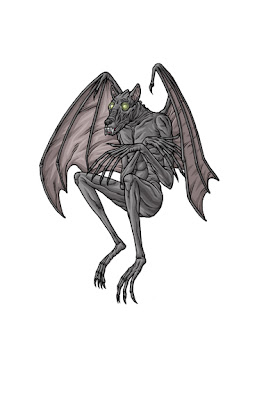 THE HOUND
"It was the oddly conventionalised figure of a crouching winged hound, or sphinx with a semi-canine face, and was exquisitely carved in antique Oriental fashion from a small piece of green jade. The expression on its features was repellent in the extreme, savouring at once of death, bestiality, and malevolence."

" For crouched within that centuried coffin, embraced by a close-packed nightmare retinue of huge, sinewy, sleeping bats, was the bony thing my friend and I had robbed; not clean and placid as we had seen it then, but covered with caked blood and shreds of alien flesh and hair, and leering sentiently at me with phosphorescent sockets and sharp ensanguined fangs yawning twistedly in mockery of my inevitable doom. And when it gave from those grinning jaws a deep, sardonic bay as of some gigantic hound, and I saw that it held in its gory, filthy claw the lost and fateful amulet of green jade, I merely screamed and ran away idiotically, my screams soon dissolving into peals of hysterical laughter."
H.P. Lovecraft, The Hound

Posted by Michael Bukowski at 3:09 PM No comments:

Email ThisBlogThis!Share to TwitterShare to FacebookShare to Pinterest
Labels: H.P. Lovecraft, The Hound 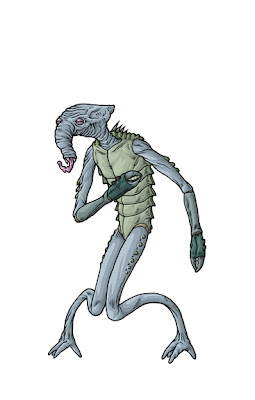 "He was, as many a night before, walking amidst throngs of clawed, snouted beings through the streets of a labyrinth of inexplicably fashioned metal under a blaze of diverse solar colour; and as he looked down he saw that his body was like those of the others—rugose, partly squamous, and curiously articulated in a fashion mainly insect-like yet not without a caricaturish resemblance to the human outline. The Silver Key was still in his grasp—though held by a noxious-looking claw."
H.P. Lovecraft & E. Hoffman Price, Through the Gates Of the Silver Key

Email ThisBlogThis!Share to TwitterShare to FacebookShare to Pinterest
Labels: E. Hoffman Price, H.P. Lovecraft, Through the Gates Of the Silver Key, Yaddithian 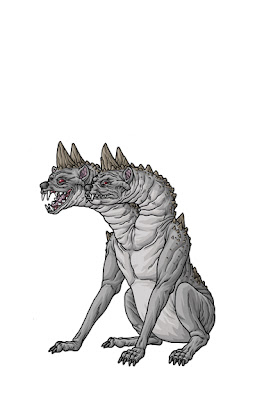 DOG-LIKE MOUNTAINS
"For the mammoth bobbing shape that overtopped the ridge was only a head—a mitred double head—and below it in terrible vastness loped the frightful swollen body that bore it; the mountain-high monstrosity that walked in stealth and silence; the hyaena-like distortion of a giant anthropoid shape that trotted blackly against the sky, its repulsive pair of cone-capped heads reaching half way to the zenith."

"And straight in the rear were three of the mighty mountain shapes seen full against the southern stars, tiptoeing wolf-like and lumberingly, their tall mitres nodding thousands of feet in the air. The carven mountains, then, had not stayed squatting in that rigid semicircle north of Inganok with right hands uplifted. They had duties to perform, and were not remiss. But it was horrible that they never spoke, and never even made a sound in walking."
H.P. Lovecraft, Dream-Quest Of Unknown Kadath 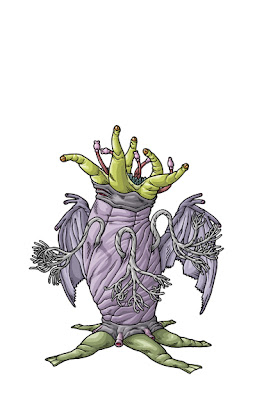 ELDER THING
"Objects are eight feet long all over. Six-foot five-ridged barrel torso 3.5 feet central diameter, 1 foot end diameters. Dark grey, flexible, and infinitely tough. Seven-foot membraneous wings of same colour, found folded, spread out of furrows between ridges. Wing framework tubular or glandular, of lighter grey, with orifices at wing tips. Spread wings have serrated edge. Around equator, one at central apex of each of the five vertical, stave-like ridges, are five systems of light grey flexible arms or tentacles found tightly folded to torso but expansible to maximum length of over 3 feet. Like arms of primitive crinoid. Single stalks 3 inches diameter branch after 6 inches into five sub-stalks, each of which branches after 8 inches into five small, tapering tentacles or tendrils, giving each stalk a total of 25 tentacles.

“At bottom of torso rough but dissimilarly functioning counterparts of head arrangements exist. Bulbous light-grey pseudo-neck, without gill suggestions, holds greenish five-pointed starfish-arrangement. Tough, muscular arms 4 feet long and tapering from 7 inches diameter at base to about 2.5 at point. To each point is attached small end of a greenish five-veined membraneous triangle 8 inches long and 6 wide at farther end. This is the paddle, fin, or pseudo-foot which has made prints in rocks from a thousand million to fifty or sixty million years old. From inner angles of starfish-arrangement project two-foot reddish tubes tapering from 3 inches diameter at base to 1 at tip. Orifices at tips. All these parts infinitely tough and leathery, but extremely flexible. Four-foot arms with paddles undoubtedly used for locomotion of some sort, marine or otherwise. When moved, display suggestions of exaggerated muscularity. As found, all these projections tightly folded over pseudo-neck and end of torso, corresponding to projections at other end."
H.P. Lovecraft, At the Mountains Of Madness

Posted by Michael Bukowski at 10:22 AM 4 comments:

Email ThisBlogThis!Share to TwitterShare to FacebookShare to Pinterest
Labels: At the Mountains Of Madness, Elder Thing, H.P. Lovecraft 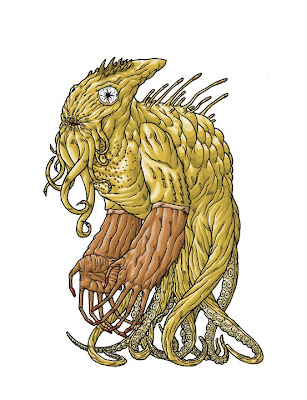 HASTUR
"I found myself faced by names and terms that I had heard elsewhere in the most hideous of connexions—Yuggoth, Great Cthulhu, Tsathoggua, Yog-Sothoth, R’lyeh, Nyarlathotep, Azathoth, Hastur, Yian, Leng, the Lake of Hali, Bethmoora, the Yellow Sign, L’mur-Kathulos, Bran, and the Magnum Innominandum—and was drawn back through nameless aeons and inconceivable dimensions to worlds of elder, outer entity at which the crazed author of the Necronomicon had only guessed in the vaguest way."
H.P. Lovecraft, The Whisperer In Darkness

"Nov. 17, '21. Utterly alien landscape. Not of earth so far as I know. Black heavens, some stars. Crags of porphyry or some similar substance. Foreground a deep lake. Hali? In five minutes the water began to ripple where something rose. Facing inward. A titanic aquatic being, tentacled. Octopoid, but far, far larger-ten-tenty times larger than the giant Octopus apollyon of the west coast. What was its neck was alone easily fifteen rods in diameter. Could not risk chance of seeing its face and destroyed the star."

"And then, from out of the darkness of the cavern's well, an eldritch head showed dimly. Then, as it thrust forth, I almost screamed aloud in horror,- for the face was a ghastly travesty on everything civilized; it rose from a neckless body which was a mass of jelly-like flesh, rubbery to the eye, and the tentacle which adorned it took rise from that area of the creature's body which was either its lower jaw or what passed for a neck"
H.P. Lovecraft & August Derleth, The Gable Window

Posted by Michael Bukowski at 8:58 AM 6 comments: 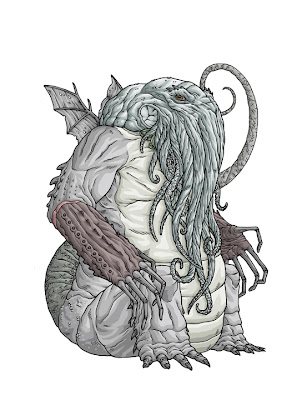 "They included not only a repetition of what he had formerly dreamed, but touched wildly on a gigantic thing “miles high” which walked or lumbered about."

"It seemed to be a sort of monster, or symbol representing a monster, of a form which only a diseased fancy could conceive. If I say that my somewhat extravagant imagination yielded simultaneous pictures of an octopus, a dragon, and a human caricature, I shall not be unfaithful to the spirit of the thing. A pulpy, tentacled head surmounted a grotesque and scaly body with rudimentary wings;"
H.P. Lovecraft, The Call Of Cthulhu

Posted by Michael Bukowski at 10:10 AM 4 comments: