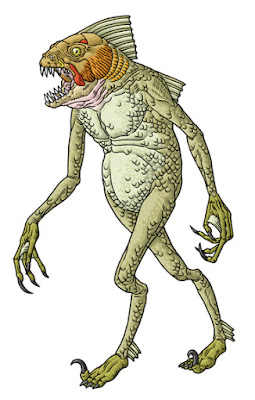 TUYABENE
"A moment later, the river's surface erupted, and the tuyabene leaped out of the water and charged toward the haramia. The river demons were man shaped, but their resemblance to humankind was only superficial, for the knees of their long legs bent backwards. Yet they moved with lethal speed and grace. Their slippery, naked skin was the color of the soil at the river's bottom. Elongated jaws gaped wide, exposing rows of needle-sharp teeth."

"From the first fingers of their hand hand the first toes of their feet grew long, hooklike claws that ended in joints that were as sharp as the tip of a dagger."
Charles R. Saunders, Imaro