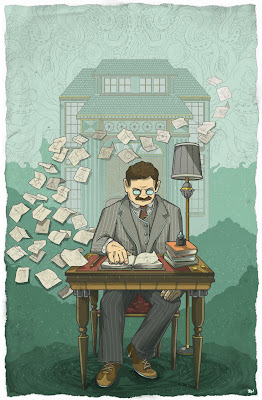 CHARLES FORT
"The more I laughed at such theories, the more these stubborn friends asseverated them; adding that even without the heritage of legend the recent reports were too clear, consistent, detailed, and sanely prosaic in manner of telling, to be completely ignored. Two or three fanatical extremists went so far as to hint at possible meanings in the ancient Indian tales which gave the hidden beings a non-terrestrial origin; citing the extravagant books of Charles Fort with their claims that voyagers from other worlds and outer space have often visited earth. Most of my foes, however, were merely romanticists who insisted on trying to transfer to real life the fantastic lore of lurking “little people” made popular by the magnificent horror-fiction of Arthur Machen."
H.P. Lovecraft, The Whisperer In Darkness
Illustration by Justin Gray