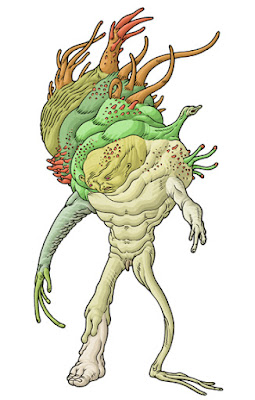 HUMANOID AMOEBA
"Looking down again, they saw that a blob of something was growing on the pavement ten feet from them."

"Turning they saw it emerge into the light--shapeless and jelly-green under the white flare."


"There was a final surge, a shrinking, and its shapelessness contracted into limbs, a head, feet. the naked man-thing pushed itself to its knees and then stood straight, the flesh by now opaque. Eye sockets caved into the face. A mouth ripped apart on the skull and the chest began to move with a west steamy sound in irregular gasps."

"Something was happening at the front. Figures, three or four of them, were detaching themselves from the mother mass and preceding it."
Samuel R. Delany, The Jewels Of Aptor