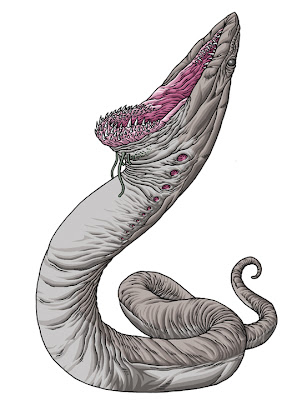 "The opposite rock, which was much lower, contained an immense fig-tree, under which there dwelt Charybdis, who thrice every day swallowed down the waters of the sea, and thrice threw them up again."
William Smith, Dictionary of Greek and Roman Biography and Mythology

"Scylla's fellow monsters lurking beneath the opposite cliff was Charybdis, a mythical whirlpool and daughter of Gaia and Poseidon."
Malcolm Day, 100 Characters From Classical Mythology

"There she assumed a new form, that of a disembodied mouth gaping at the surface, sucking in air and sea, and spewing them back out in an enormous
vortex three times a day."
Carol Rose, Giants, Monsters and Dragons