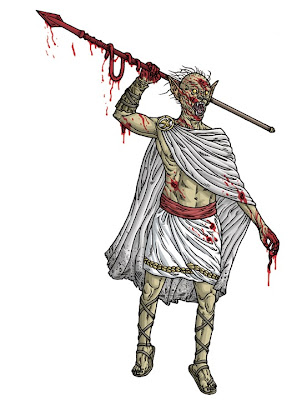 DEIMOS
"Ares and his train have gone forth with the madness of Gods, and have returned, Deimos and Phobos glutted with unnatural delight."
H.P. Lovecraft & Anna Helen Crofts, Poetry and the Gods

"DEIMOS was the god  of fear, dread and terror, and his twin-brother PHOBOS of panic fear, flight and battlefield rout. They were sons of the god Ares, who accompanied their father into battle, driving his chariot and spreading fear in their wake."

"In classical art the two were usually represented as youths. Phobos was sometimes depicted with a lion or lion-like head."

"Here Phobos and Ares there stirred up the hosts: hard after followed Deimos with slaughter's gore besprent, that in one host might men see, and be strong, in the other fear."
Quintus Smyrnaeus, Fall Of Troy

"Just before the entrance, even within the very jaws of Hades, Luctus and avenging Curae have set their bed; there pale Morbi dwell, sad Senectus, and Phobos, and Fames, temptress to sin, and loathly Egestas, shapes terrible to view."
Virgil, Aeneid