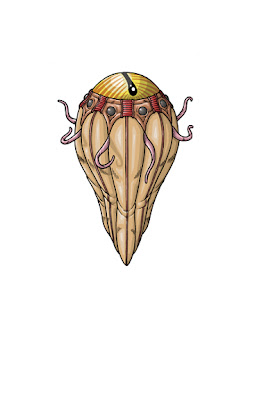 Posted by Michael Bukowski at 10:17 AM No comments:

THE COLOUR OUT OF SPACE 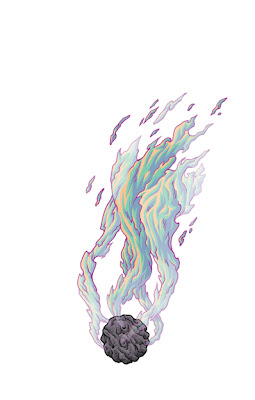 THE COLOUR OUT OF SPACE
"'It must be somethin’ from away off in the sky like the men from the college last year says the meteor stone was. The way it’s made an’ the way it works ain’t like no way o’ God’s world. It’s some’at from beyond.'"

"It was a scene from a vision of Fuseli, and over all the rest reigned that riot of luminous amorphousness, that alien and undimensioned rainbow of cryptic poison from the well—seething, feeling, lapping, reaching, scintillating, straining, and malignly bubbling in its cosmic and unrecognisable chromaticism."
H.P. Lovecraft, The Colour Out Of Space

Posted by Michael Bukowski at 10:36 AM 5 comments:

Email ThisBlogThis!Share to TwitterShare to FacebookShare to Pinterest
Labels: H.P. Lovecraft, The Colour Out Of Space 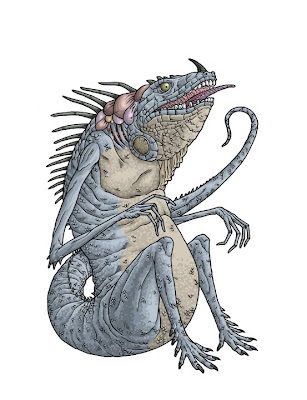 BOKRUG
"However this may be, it is certain that they worshipped a sea-green stone idol chiselled in the likeness of Bokrug, the great water-lizard; before which they danced horribly when the moon was gibbous."

"Here was done the very secret and ancient rite in detestation of Bokrug, the water-lizard, and here rested the altar of chrysolite which bore the DOOM-scrawl of Taran-Ish."
H.P. Lovecraft, The Doom That Came To Sarnath

Email ThisBlogThis!Share to TwitterShare to FacebookShare to Pinterest
Labels: H.P. Lovecraft, The Doom That Came To Sarnath 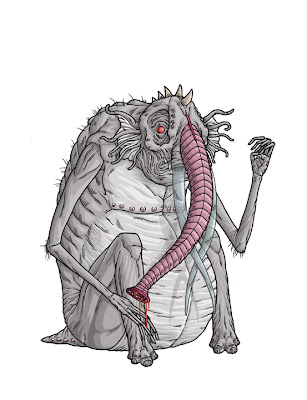 CHAUGNAR FAUGN
"Others were drawn from darker and more furtively whispered cycles of subterranean legend—black, formless Tsathoggua, many-tentacled Cthulhu, proboscidian Chaugnar Faugn, and other rumoured blasphemies from forbidden books like the Necronomicon, the Book of Eibon, or the Unaussprechlichen Kulten of von Junzt."
H.P. Lovecraft & Hazel Heald, The Horror In the Museum

Words could not adequately convey the repulsiveness of the thing. It was endowed with a trunk and great, uneven ears, and two enormous tusks protruded from the corners of its mouth. But it was not an elephant. Indeed, its resemblace to an actual elephant was, at best, sporadic and superficial, despite certain unmistakable points of similarity. The ears were webbed and tentacled, the trunk terminated in a huge flaring disk at least a foot in diameter, and the tusks, which intertwined and interlocked at the base of the statue, were as translucent as rock crystal."
Frank Belknap Long, The Horror From the Hills 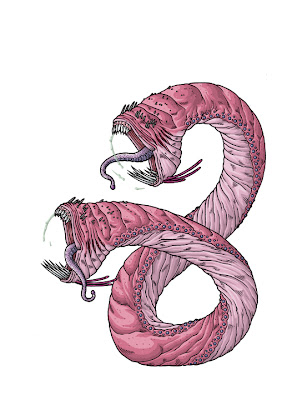 NOTH-YIDIK
“Fool! Spawn of Noth-Yidik and effluvium of K’thun! Son of the dogs that howl in the maelstrom of Azathoth! You would have been sacred and immortal, and now you are betraying It and Its priest!"
H.P. Lovecraft & Hazel Heald, The Horror In the Museum

"Aye, I speak of the very Hounds Of Tindalos themselves, those Hunters From Beyond that be the Spawn of Noth-Yidik and the effluvium of K'thun, and that howl forever in the maelstrom that is dread and fearsome Azathoth; aye, They be none other than the very minions and servitors of the Daemon-Sultan, under Their ghastly sire and dam, Noth-Yidik and terrible K'thun."
Lin Carter, The Madness Out Of Time

Posted by Michael Bukowski at 10:09 AM 2 comments:

Email ThisBlogThis!Share to TwitterShare to FacebookShare to Pinterest
Labels: H.P. Lovecraft, Hazel Heald, Lin Carter, The Horror In the Museum, The Madness Out Of Time 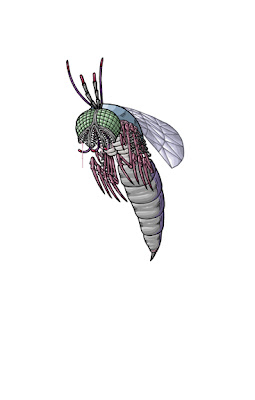 INSECTS FROM SHAGGAI
"221-Insects or other entities from space attack and penetrate a man’s head and cause him to remember alien and exotic things—possible displacement of personality."
H.P. Lovecraft, Commonplace Book

"At last a shape appeared, flapping above the ground on leathery wings. The thing which flew whirring toward me was followed by a train of others, wings slapping the air at incredible speed... I could ... make out many more details... Those huge lidless eyes which stared in hate at me, the jointed tendrils which seemed to twist from the head in cosmic rhythms, the ten legs, covered with black shining tentacles and folded into the pallid underbody, and the semi-circular ridged wings covered with triangular scales... I saw the three mouths of the thing move moistly, and then it was upon me."
Ramsey Campbell, The Insects from Shaggai 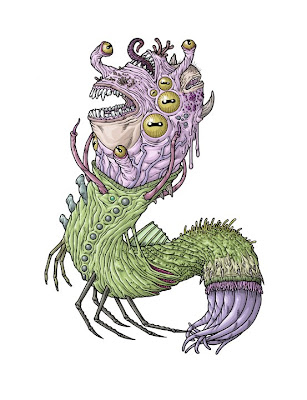 GHATANOTHOA
"Sight of the god, or its image, as all the legends of the Yuggoth-spawn agreed, meant paralysis and petrifaction of a singularly shocking sort, in which the victim was turned to stone and leather on the outside, while the brain within remained perpetually alive—horribly fixed and prisoned through the ages, and maddeningly conscious of the passage of interminable epochs of helpless inaction till chance and time might complete the decay of the petrified shell and leave it exposed to die."

"Oozing and surging up out of that yawning trap-door in the Cyclopean crypt I had glimpsed such an unbelievable behemothic monstrosity that I could not doubt the power of its original to kill with its mere sight. Even now I cannot begin to suggest it with any words at my command. I might call it gigantic—tentacled—proboscidian—octopus-eyed—semi-amorphous—plastic—partly squamous and partly rugose—ugh! But nothing I could say could even adumbrate the loathsome, unholy, non-human, extra-galactic horror and hatefulness and unutterable evil of that forbidden spawn of black chaos and illimitable night. As I write these words the associated mental image causes me to lean back faint and nauseated."
H.P. Lovecraft & Hazel Heald, Out Of the Aeons
Posted by Michael Bukowski at 11:12 AM 1 comment:

Email ThisBlogThis!Share to TwitterShare to FacebookShare to Pinterest
Labels: H.P. Lovecraft, Hazel Heald, Out Of the Aeons 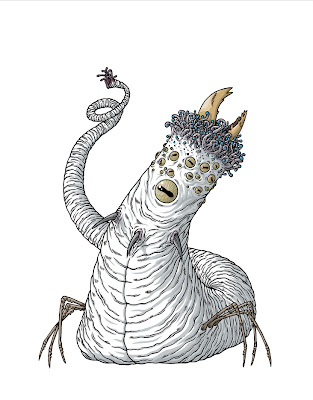 "'Dan, for God's sake! The pit of the shoggoths! Down the six thousand steps... the abomination of abominations... I never would let her take me, and then I found myself
there - Iä! Shub-Niggurath!'"
H.P. Lovecraft, The Thing On the Doorstep

"Joe Mazurewicz - the prayers against the Crawling Chaos now turning to an inexplicably triumphant shriek - worlds of sardonic actuality impinging on vortices of febrile dream - Iä! Shub-Niggurath! The Goat with a Thousand Young..."
H.P. Lovecraft, Dreams In the Witch-House

"The thing in the picture was standing in a doorway. He could no believe it was alive - that pillar of white flesh supported on many-jointed bony legs tipped with great circular pads could never move about, let alone think. It had no arms, merely three spines which dug into the ground. But the head was worst - formed of thick coils of while jelly, covered with grey watery eyes, and at the center was a huge toothed beak."Ramsey Campbell, The Moon Lens

Posted by Michael Bukowski at 10:22 AM 6 comments:

Email ThisBlogThis!Share to TwitterShare to FacebookShare to Pinterest
Labels: Dreams In the Witch-House, H.P. Lovecraft, Ramsey Campbell, The Thing On the Doorstep, The Whisperer In Darkness
Newer Posts Older Posts Home
Subscribe to: Posts (Atom)