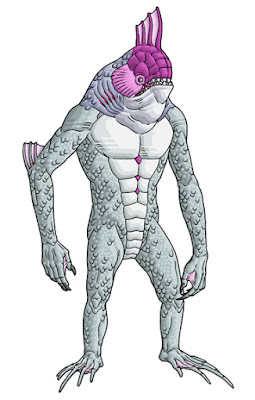 HIBI
"Despite the bowed legs, the creature was as tall as a large man. Gray-green scaled covered its body from head to foot. Long, ape-lkie arms hung from its broad shoulders. The arms ended in webbed hands tipped with curved, needle-sharp claws. Gill-slits oscillated at the sides of its thick neck."

"Its head was a surreal amalgam of human and piscine features: a high-vaulted skull crested with a spiky fin; circular, unblinking eyes; and a wide gash of a mouth filled with pointed teeth that would not have been out of place in the jaws of a shark. Scales covered the part of its face where the nostrils of an air-breather would have been located."
Charles R. Saunders, Imaro II: The Quest For Cush

OIBONOK
"In response, Muburi...changed. Instead of Muburi, Imaro was suddenly holding a gigantic, writhing serpent, long and thick as a python, covered with unpatterned scales the color of human skin. Cold ophidian eyes met Imaro's startled gaze, and a black, forked tongue flicked from an open, lipless mouth."

"Then Imaro opened his eyes--and his skin crawled as he stared wide-eyed at the sprawled corpse of Muburi, lit eerily by Mwesu's glow. The oibonok's limbs seemed almost boneless, and his neck was bent at an unnatural angle, attesting to the force of Imaro's final surge of power."
Charles R. Saunders, Imaro

Starting tomorrow, I'll be posting 4 full weeks of new monsters beginning with, one of my favorite authors, Charles R. Saunders!

If you've been following this blog or my Instagram you'll know I'm obsessed with Saunders' Sword and Soul characters Imaro and Dossouye. Imagine if Conan had a well planned and executed arc, multiple well-rounded recurring characters and it didn't have the racism. That's Imaro. Imagine a Dora Milaje-type warrior with a water buffalo as a best friend that wanders the countryside like a ronin. That's Dossouye. But what Saunders is amazing at is writing monsters. His creatures are some of the most imaginative and bizarre I've encountered in all my reading. They draw on the mythology of various African cultures, pulp fiction and even cryptids!
Support Charles' work by buying one of his books through Lulu! Hopefully, my drawings will inspire you to pick up some of his work.