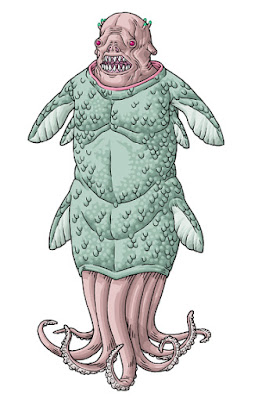 MONK FISH
"The monk fish was credited with the head of a human with a tonsured hairstyle like that of a monk and a monk's cowl on a cape about its shoulders. Its fish-like body, covered in scales, was supported vertically by two extremely large flippers or arms."
Carol Rose, Giants, Monsters and Dragons

"Named a 'sea monk', because its smooth-looking head evoked men of the cloister, it resembled, in an original sketch, a large squid."
David Grann, The Squid Hunter 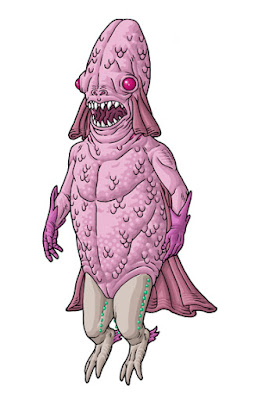 BISHOP FISH
"The bishop fish was described as a giant fish but in place of the usual pectoral fins it had two projections resembling claws. Its tail fins resembled legs wearing a fisherman's high boots, while its dorsal fin extended about the body. The head, neither truly fish nor truly human, was crowned by a projection resembling a bishop's miter."
Carol Rose, Giants, Monsters and Dragons 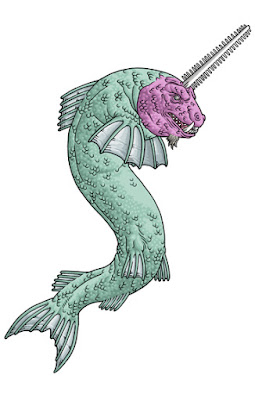 SAW FISH
"The saw fish is also a beast of the sea; the body is huge and great, the head hath a crest and is hard and dented like a saw. It will swim under ships and cut them, that the water may come in, and he may feed on the men when the ship is drowned."
Olaus Magnus, A Compendious History Of the Goths, Swedes & Vandals 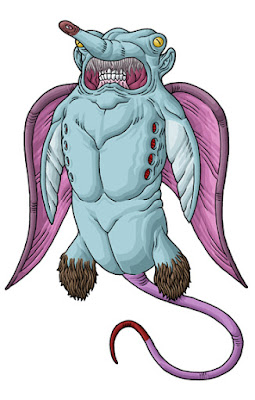 SEA EAGLE
""In 1550 a flying fish was caught that was frightening and gave marvel to see. It was four or more feet in length and twice as much in width from one tip to the other of its wing, and a good square foot in thickness. Its head was wondrously thick, having two eyes, one on top of the other, in a line; two large ears and two mouths; its snout was very fleshy; green in color; its wings were double; on its throat it had five holes in the fashion of a lamprey; its tail was an ell long, on top of which were two small wings."
Ambroise Paré, Des Monstres 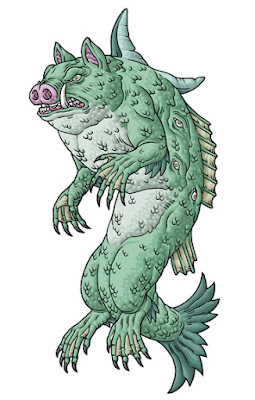 MARINE SOW
"The Marine Sow was described as a vast creature of seventy-two feet in length, fourteen feet in depth, and seven feet across from eye to eye on a head that resembled that of a pig. It also had a further six eyes, three located on each side of its scaly body and a crescent-shaped dorsal fin."
Carol Rose, Giants Monsters and Dragons 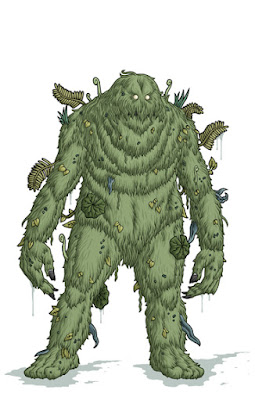 SORCERER’S FAMILIAR
“And something showed itself there in the swampiness. A lump like a head rose into view, with two larger lumps like shoulders just below it.”

“Two slab-like paws caught the bald rim of the circle and a great shaggy shape humped itself up and out and stood erect before him. It was taller even than Thunstone, broader even than he was and it looked nothing natural. In the dancing light of the torch, it seemed to be thatched over with dark, wet fronds and tussocks. Its head was draped with such stuff. Though which gleamed two closely set eyes, pale as white hot iron. A mouth opened in the tangle and out came a rumbling shout like the roar of a great beast. It slouched heavily towards him on two feet like shovels.”

“The weedy bulk almost forced him back.”
Manly Wade Wellman, Rouse Him Not
Posted by Michael Bukowski at 10:00 AM No comments: 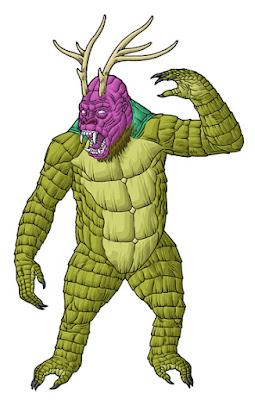 GROB
"The other, Grob, might be a great crouching ape, if apes had branched horns and were covered with green scales the size of lily pads."

"It was a shrewd enough blow to make Grob flounder a bit, and his head lifted. Under the shallow jaw with its fierce pointed teeth showed a throat without scales, shaggy with mossy hair."


Manly Wade Wellman, The Edge Of the World 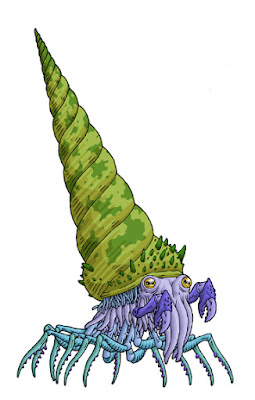 OSPARIEL
"One either side of her ebony throne lounged a tame monster, heightening by contrast the impact of Iarie's beauty. One of these, the rather mollusoid Ospariel, was crapaced in a green shell, from which peered brilliant eyes above a stir of tentacles."

"Just behind him crept Ospariel on what seemed to be an infinity of dark, jointed legs."


Manly Wade Wellman, The Edge Of the World 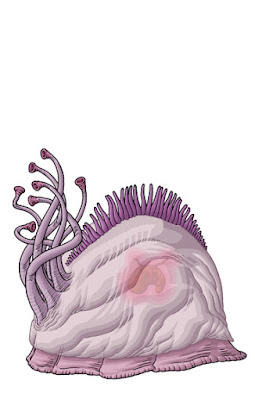 COLD PERSON
“They were great, translucent, helmet-shaped things, moving by hitch-and-hunch upon a rubbery pedestal, snail fashion, but with surprising speed and maneuverability. The comblike crest stood a full five feet from the ground, and at the lowest and thickest point the body was about the same in diameter. At a point just forward of the top sprouted a spray of from six to eight tendrils, like a wriggling plume for the helmet. These were snakily agile, capable of stretching six feet or more, and each terminated in a disklike sucker, like a palm, for grasping or holding or cradling. In the midst of the gleaming gray bulk hung a heavy-appearing body the size of a football, that gave off a deep-red light. This may have been the vital organ, or the sensory body, or both. It throbbed at times, and the degree of its light varied.”

“There was a crowding together, a fluttering of tentacles, as though the Cold People conferred in sign language.”
Manly Wade Wellman, The Dark Destroyers 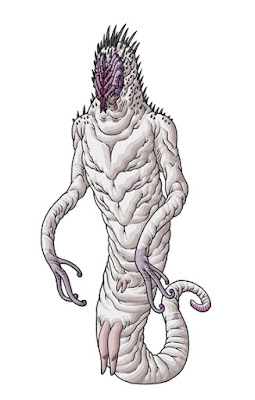 
"It was man-sized but not man-shaped, not really. Maybe more like a big lizard risen up on its tail."

"The helmetlike dome had a curved window in it, glass or something like glass That window had been shattered by Gander Eye's bullet. Inside it, he saw something that was not a face. It was a shiny, shaggy expanse as gray as half-melted lard, there inside. The shagginess wasn't hair; it might be like the legs of a whole lot of flies."
Manly Wade Wellman, The Beyonders 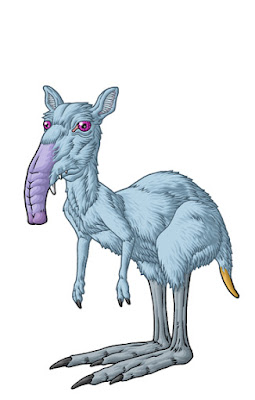 BLUE-HUED THING
“There was even a big blue-hued thing that reminded the young man a little of a kangaroo.”
Margaret St. Clair, Garden Of Evil 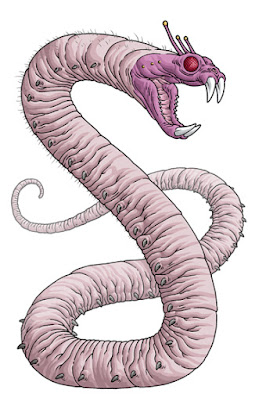 TATZEL WORM
“An enormous, horrid, ophidian head was rearing over the fiery ramparts. The faceted eyes gleamed red in the firelight, the neck was as thick as a tree trunk. It turned Appy cold to look at it. He’d heard about the horrors of the tatzel worm since he was a fledgling.”

“After a moment the head reappeared, holding Charleen lightly between its dreadfully-toothed jaws.”
Margaret St. Clair, The Hero Comes 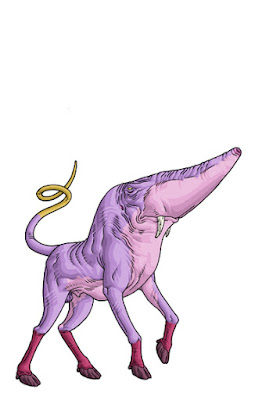 RHODOPS
“On the way they had to ford two swollen rivers and beat off the attack of a must maddened bull rhodops.”
Margaret St. Clair, Garden Of Evil