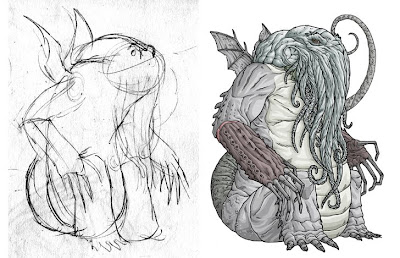 Here's a very rough sketch for the my "lazy" Cthulhu. I basically used this to get the position and basic anatomy of the creature down before I start the final produce. Much of the detail comes after I've already begun the final piece. 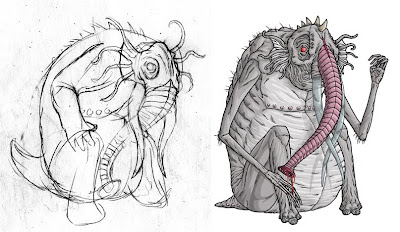 And here's a really funny sketch of Chaugnar Faugn. He looks very surprised in the sketch and much more refined in the final piece. And by refined, I mean like he could be holding a martini glass.

Ok, I'll see if I can dig up some more of these because I may not be able to finish the 2 Great Old Ones I'm working on for next week. The piece for the Dead and Dreaming show is taking way longer than I thought but looks really cool.
Posted by Michael Bukowski at 10:24 AM 3 comments:

While I'm working on new stuff, I thought I'd post some sketches next to their finished counterpart so you could see how I work. 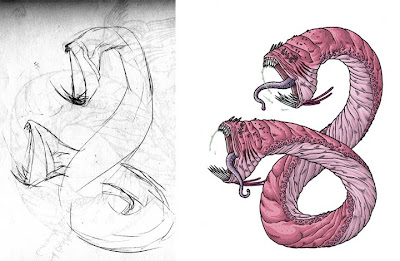 The first one is my Noth Yidik sketch. It's super rough and way more of a thumbnail than anything. I wanted to get the two headed "worm" idea down on paper so I just scribbled this really fast. 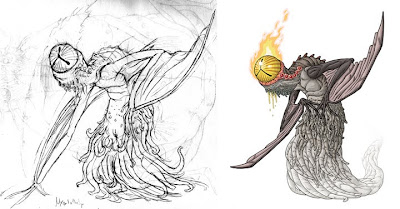 The Nyarlathotep sketch is way more detailed. Basically, the only thing that changed was the position of the right arm and the addition of the acid dripping from under its eyeball.

I'll see if I have any more of these to post, but I usually just go for it and don't even sketch. That's probably why I redo so many, haha...
Posted by Michael Bukowski at 10:20 AM 5 comments: 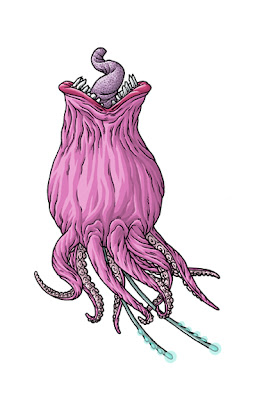 INTERDIMENSIONAL OCTOPOD
"All the objects—organic and inorganic alike—were totally beyond description or even comprehension. Gilman sometimes compared the inorganic masses to prisms, labyrinths, clusters of cubes and planes, and Cyclopean buildings; and the organic things struck him variously as groups of bubbles, octopi, centipedes, living Hindoo idols, and intricate Arabesques roused into a kind of ophidian animation."
H.P. Lovecraft, Dreams In the Witch-House 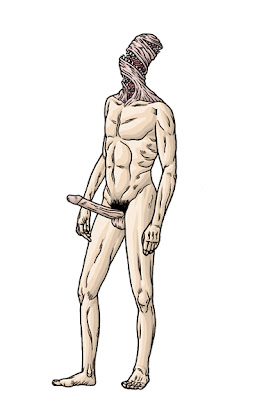 INCUBUS
"In an instant every moving entity was electrified; and forming at once into a ceremonial procession, the nightmare horde slithered away in quest of the sound—goat, satyr, and aegipan, incubus, succuba, and lemur, twisted toad and shapeless elemental, dog-faced howler and silent strutter in darkness—all led by the abominable naked phosphorescent thing that had squatted on the carved golden throne, and that now strode insolently bearing in its arms the glassy-eyed corpse of the corpulent old man."
H.P. Lovecraft, The Horror At Red Hook

"According to many Church Fathers, an incubus is an angel who fell because of lust for wemen. Essentially the incubus is a lewd demon or goblin which seeks sexual intercourse with women. The corresponding devil who appears to men is the succubus."
Rossel Hope Robbins, The Encyclopedia Of Witchcraft & Demonology 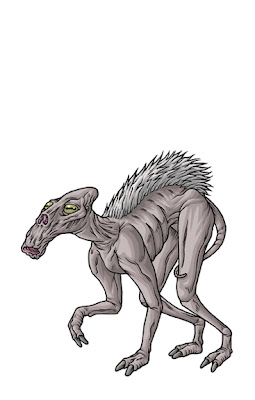 BUOPOTH
"Sometimes he walked close to the bank of Oukranos and whistled to the sprightly and iridescent fish of that crystal stream, and at other times he paused amidst the whispering rushes and gazed at the great dark wood on the farther side, whose trees came down clear to the water’s edge. In former dreams he had seen quaint lumbering buopoths come shyly out of that wood to drink, but now he could not glimpse any."
H.P. Lovecraft, Dream-Quest Of Unknown Kadath 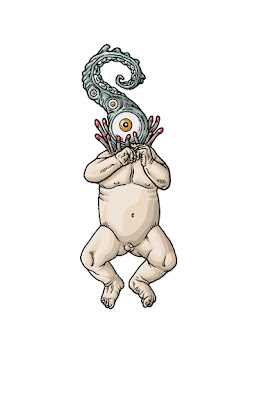 DISTURBINGLY STRANGE INFANT
"The walls were lined with small cells, in seventeen of which—hideous to relate—solitary prisoners in a state of complete idiocy were found chained, including four mothers with infants of disturbingly strange appearance. These infants died soon after exposure to the light; a circumstance which the doctors thought rather merciful."
H.P. Lovecraft, The Horror At Red Hook 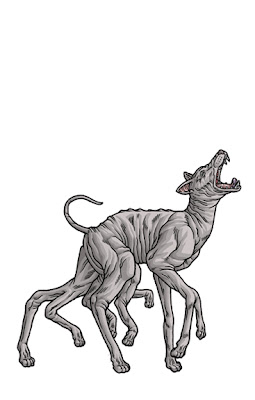 DISTORTED FOX
"They were the usual winter prints of red squirrels, white rabbits, and foxes, but the brooding farmer professed to see something not quite right about their nature and arrangement. He was never specific, but appeared to think that they were not as characteristic of the anatomy and habits of squirrels and rabbits and foxes as they ought to be."
H.P. Lovecraft, The Colour Out Of Space

Email ThisBlogThis!Share to TwitterShare to FacebookShare to Pinterest
Labels: H.P. Lovecraft, The Colour Out Of Space 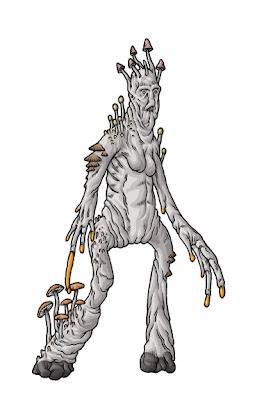 "Yet, as we drew near to it, I became gradually aware that here the vile fungus, which had driven us from the ship, was growing riot. In places it rose into horrible, fantastic mounds, which seemed almost to quiver, as with a quiet life, when the wind blew across them."

It was on the thumb of her right hand, that the growth first showed. It was only a small circular spot, much like a little grey mole. My god! how the fear leapt to my heart when she showed me the place. We cleansed it, between us, washing it with carbolic and water. In the morning of the following day she showed her hand to me again. The grey warty thing had returned.""Abruptly, as I stared, the thought came to me that the thing had a grotesque resemblance to the figure of a distorted human creature. Even as the fancy flashed into my brain, there was a slight, sickening of noise of tearing, and I saw that one of the branch-like arms was detaching itself from the surrounding grey masses and coming towards me.William Hope Hodgson, The Voice In the Night 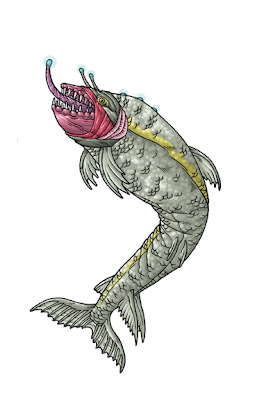 CARNIVOROUS FISH
"Once in a while he paused to watch a carnivorous fish catch a fishing bird, which it lured to the water by shewing its tempting scales in the sun, and grasped by the beak with its enormous mouth as the winged hunter sought to dart down upon it."
H.P. Lovecraft, Dream-Quest Of Unknown Kadath 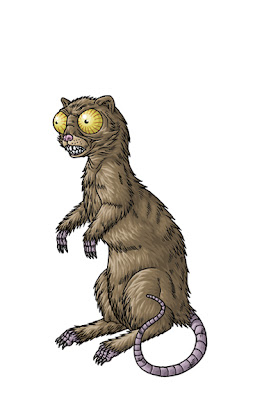 ZOOG
"In the tunnels of that twisted wood, whose low prodigious oaks twine groping boughs and shine dim with the phosphorescence of strange fungi, dwell the furtive and secretive zoogs;"

"Most of them live in burrows, but some inhabit the trunks of the great trees; and although they live mostly on fungi it is muttered that they have also a slight taste for meat, either physical or spiritual, for certainly many dreamers have entered that wood who have not come out."

"It was the zoogs, for one sees their weird eyes long before one can discern their small, slippery brown outlines."
H.P. Lovecraft, Dream-Quest Of Unknown Kadath 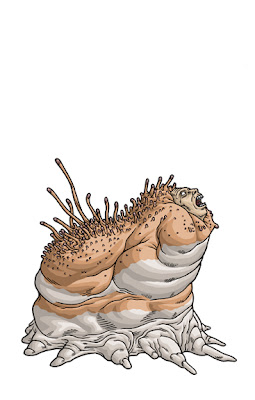 FUNGUS BEAST
"I seemed to be looking down from an immense height upon a twilit grotto, knee-deep with filth, where a white-bearded daemon swineherd drove about with his staff a flock of fungous, flabby beasts whose appearance filled me with unutterable loathing."
"No, no, I tell you, I am not that daemon swineherd in the twilit grotto! It was not Edward Norrys’ fat face on that flabby, fungous thing! "
H.P. Lovecraft, The Rats In the Walls

Email ThisBlogThis!Share to TwitterShare to FacebookShare to Pinterest
Labels: H.P. Lovecraft, The Rats In the Walls 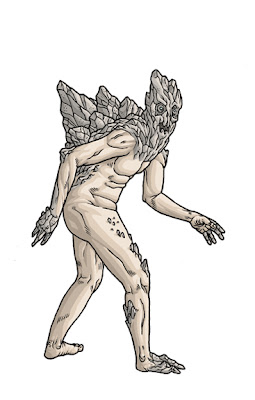 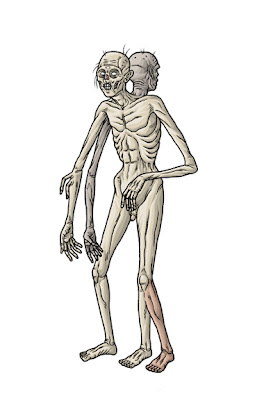 Y'M-BHI
"These, Gll’-Hthaa-Ynn explained, were what men called the y’m-bhi—organisms which had died, but which had been mechanically reanimated for industrial purposes by means of atomic energy and thought-power."
"Those which most repelled Zamacona were those whose mutilations were greatest; for some were wholly headless, while others had suffered singular and seemingly capricious subtractions, distortions, transpositions, and graftings in various places. The Spaniard could not account for this condition, but Gll’-Hthaa-Ynn made it clear that these were slaves who had been used for the amusement of the people in some of the vast arenas."
H.P. Lovecraft & Zealia Bishop, The Mound 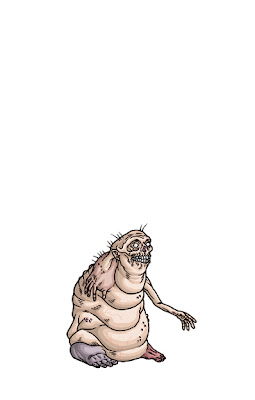 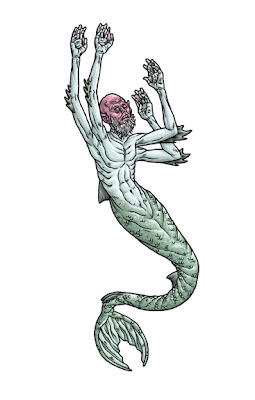 GNORRI
"After a strange vision this man published a tale of Carter’s vanishing, in which he hinted that the lost one now reigned as king on the opal throne of Ilek-Vad, that fabulous town of turrets atop the hollow cliffs of glass overlooking the twilight sea wherein the bearded and finny Gnorri build their singular labyrinths."
H.P. Lovecraft & E.Hoffman Price, Through the Gates Of the Silver Key

Email ThisBlogThis!Share to TwitterShare to FacebookShare to Pinterest
Labels: E. Hoffman Price, H.P. Lovecraft, Through the Gates Of the Silver Key 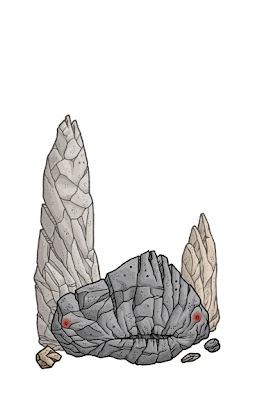 SENTIENT ROCK
"214-Talking rock of Africa-immemorially ancient oracle in desolate jungle ruins that speaks with a voice out of the aeons."
H.P. Lovecraft, Commonplace Book

THE HAUNTER OF THE DARK (NYARLATHOTEP) 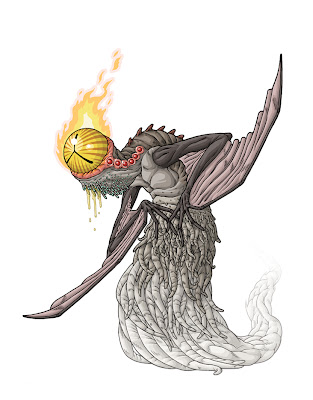 THE HAUNTER OF THE DARK (NYARLATHOTEP)
"The skull was in a very peculiar state—stained yellow, and with a charred aperture in the top as if some powerful acid had eaten through the solid bone."

"Those living near the dreaded church had sworn that the thing in the steeple had taken advantage of the street-lamps’ absence and gone down into the body of the church, flopping and bumping around in a viscous, altogether dreadful way."

'“What am I afraid of? Is it not an avatar of Nyarlathotep, who in antique and shadowy Khem even took the form of man?"'