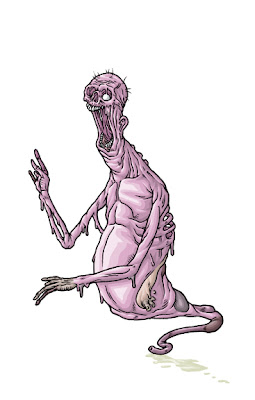 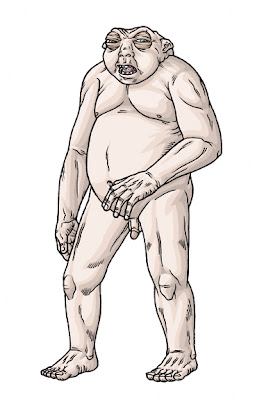 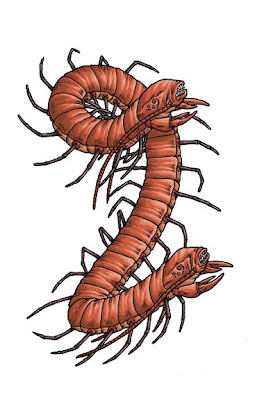 INTERDIMENSIONAL CENTIPEDE
"All the objects—organic and inorganic alike—were totally beyond description or even comprehension. Gilman sometimes compared the inorganic masses to prisms, labyrinths, clusters of cubes and planes, and Cyclopean buildings; and the organic things struck him variously as groups of bubbles, octopi, centipedes, living Hindoo idols, and intricate Arabesques roused into a kind of ophidian animation."
H.P. Lovecraft, Dreams In the Witch-House 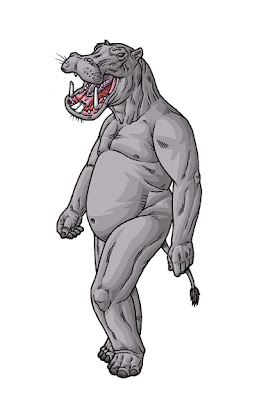 HUMANOID HIPPOPATOMUS
"I would not look at the marching things. That I desperately resolved as I heard their creaking joints and nitrous wheezing above the dead music and the dead tramping. It was merciful that they did not speak . . . but God! their crazy torches began to cast shadows on the surface of those stupendous columns. Heaven take it away! Hippopotami should not have human hands and carry torches . . . men should not have the heads of crocodiles. . . ."
H.P. Lovecraft & Harry Houdini, Under the Pyramids 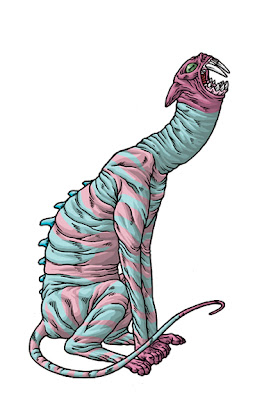 CAT FROM SATURN
"It was one of the army’s outposts, stationed on the highest of the mountains to watch the one foe which earth’s cats fear; the very large and peculiar cats from Saturn, who for some reason have not been oblivious of the charm of our moon’s dark side."
H.P. Lovecraft, Dream-Quest Of Unknown Kadath

So, for the last few weeks I've been behind on posting new work. This is the reason. An acquaintance of mine, Sam Heimer, is organizing a group show based on the works of H. P. Lovecraft here in Philadelphia and asked me to be a part of it. He even plans on doing a graphic novel formatted book of all the illustrations with sketches and bios from all the artists. I chose to do a portrait of Wilbur Whateley as an infant...and here it is. I usually don't post my other art on here, but I thought the subject matter made it pertinent. 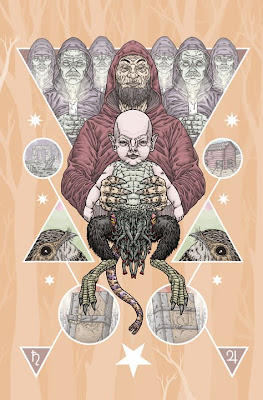 WILBUR WHATELEY
"Above the waist it was semi-anthropomorphic; though its chest, where the dog’s rending paws still rested watchfully, had the leathery, reticulated hide of a crocodile or alligator. The back was piebald with yellow and black, and dimly suggested the squamous covering of certain snakes. Below the waist, though, it was the worst; for here all human resemblance left off and sheer phantasy began. The skin was thickly covered with coarse black fur, and from the abdomen a score of long greenish-grey tentacles with red sucking mouths protruded limply. Their arrangement was odd, and seemed to follow the symmetries of some cosmic geometry unknown to earth or the solar system. On each of the hips, deep set in a kind of pinkish, ciliated orbit, was what seemed to be a rudimentary eye; whilst in lieu of a tail there depended a kind of trunk or feeler with purple annular markings, and with many evidences of being an undeveloped mouth or throat. The limbs, save for their black fur, roughly resembled the hind legs of prehistoric earth’s giant saurians; and terminated in ridgy-veined pads that were neither hooves nor claws."
H.P. Lovecraft, The Dunwich Horror

Posted by Michael Bukowski at 10:29 AM 8 comments: