For the last day of sketches I selected three Gods In Human Form which have been some of my favorite things to draw as of late. I really enjoy doing the research into various world myths and imagine I'm reading some of the same info that HPL came across when he was writing. I don't know if you guys find these as entertaining as I do, but I hope so, because Lovecraft wrote about a TON more...... 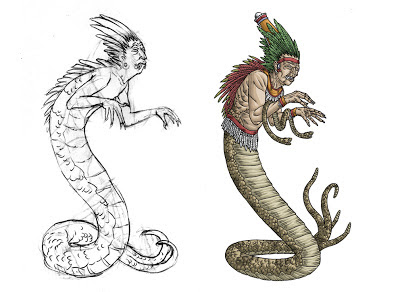 There's not much difference from start to finish on Quetzalcoatl  here, except for the addition of the two headed snake. I really like how imaginative and violent Mayan/Aztec mythology is and how utterly alien it is to the Western mindset. 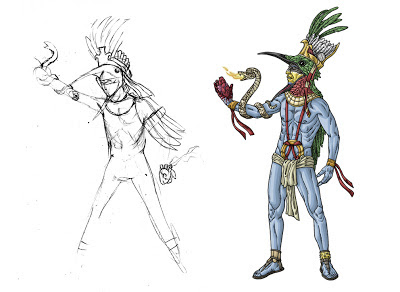 Huitzilopotchli varies a bit from one to the next. The sketch is basically just a really rough idea of what I wanted. The pose is really different and the heart switched hands. Plus, I had to interpret what I thought Mayan outfits would look like after researching their glyphs. I hope it's not too inaccurate. 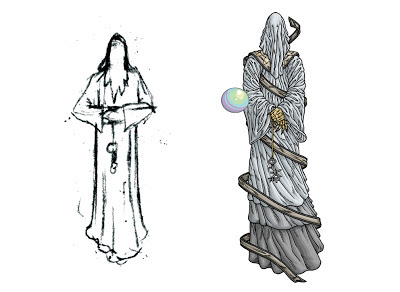 Finally we have a 'Umr at-Tawil. I changed a few things, like the layers of robe and the swirly, unnecessary ribbon encircling him but other than that, they look pretty similar.

Hope you guys enjoyed the sketch posts..I'll make one more first attempt/redraw post and then in March it's three weeks of new monsters and zines!

This batch of sketches are some Great Old Ones and are maybe the funniest/worst sketches I've posted. I'm really happy with the monsters themselves though. 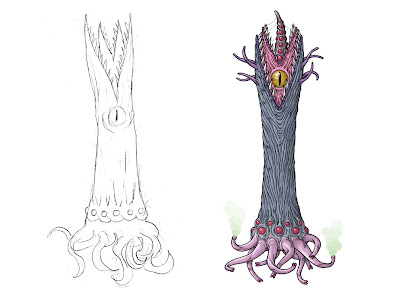 As you can see this K'thun sketch is dummmmmb. The eye being where it i sand the proportions of the mouths and the lack of tentacles make it look really goofy for some reason. I do like the final version though. I got he idea for this one while staring at the tree outside Grindcore House last summer, but hopefully it doesn't look too tree-ish to be creepy. 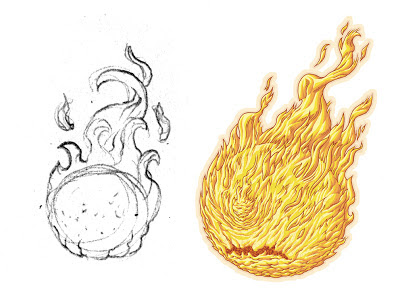 This Cthugha sketch is super rough but the basic concept is there.  Fire and water are two things I have a lot of trouble portraying in my style. It doesn't come up too often so it's kind of hard to perfect. However, I think I finally go it with this thing and hopefully you guys like it too! 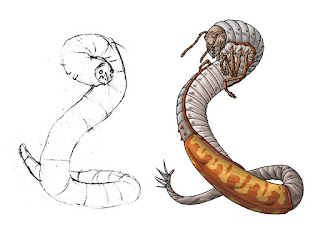 Sarall is one of the more obscure HPL deities (if you can even actually call him that. I did but I like to stretch the canon a bit). The sketch differs quite a bit from the final version aside from the basic pose. The arms, stegasaur-type tail and razor-clam shell are all missing from the sketch. It's more of a straight forward worm on the left and then some sort of (hopefully)
terrifying grub monster on the right.

Tomorrow's the last of the sketch posts and it's full of Gods In Human Form. Don't forget, new guys coming in March! 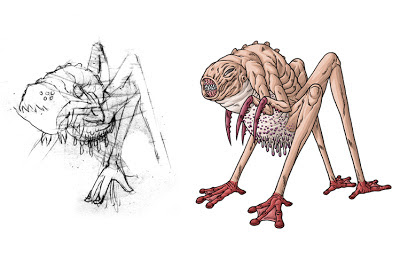 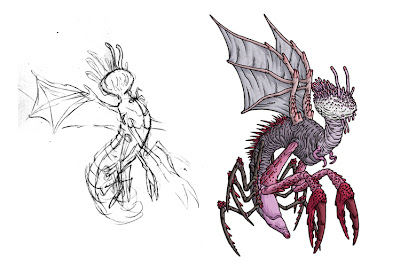 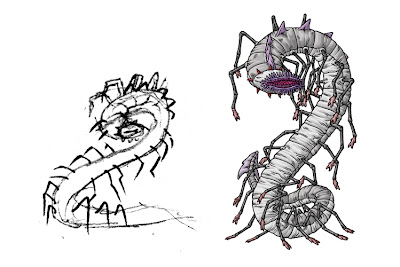 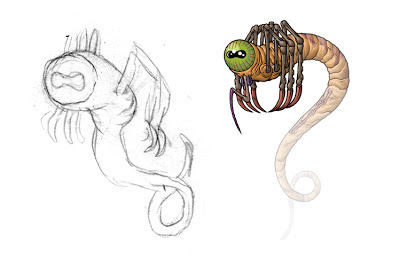