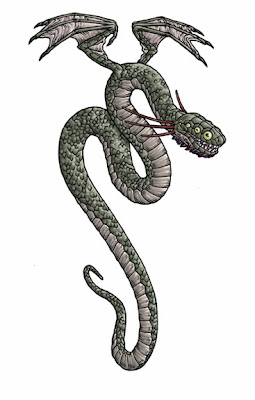 SCALY WINGED BEAST
The vast tomb, or temple, was an anomalous color—a nameless blue-violet shade. Large beasts flew in the cloudy sky, and I seemed to hear the pounding of their scaly wings.
H.P. Lovecraft & Duane W. Rimel, The Tree On the Hill

Email ThisBlogThis!Share to TwitterShare to FacebookShare to Pinterest
Labels: Duane W. Rimel, H.P. Lovecraft, The Tree On the Hill 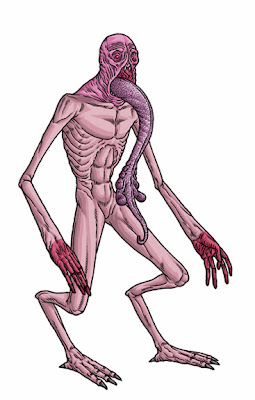 STRANGE-TONGUED FIEND
"Presently those voices, while still chaotic before me, seemed to my beating brain to take articulate form behind me; and down there in the grave of unnumbered aeon-dead antiquities, leagues below the dawn-lit world of men, I heard the ghastly cursing and snarling of strange-tongued fiends."
H.P. Lovecraft, The Nameless City 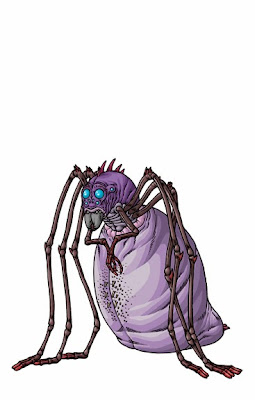 "Of earthly minds there were some from the winged, star-headed, half-vegetable race of palaeogean Antarctica; one from the reptile people of fabled Valusia; three from the furry pre-human Hyperborean worshippers of Tsathoggua; one from the wholly abominable Tcho-Tchos; two from the arachnid denizens of earth’s last age; five from the hardy coleopterous species immediately following mankind, to which the Great Race was some day to transfer its keenest minds en masse in the face of horrible peril; and several from different branches of humanity."
H.P. Lovecraft, The Shadow Out Of Time
Posted by Michael Bukowski at 10:00 AM 3 comments:

Email ThisBlogThis!Share to TwitterShare to FacebookShare to Pinterest
Labels: Dream-Quest Of Unknown Kadath, H.P. Lovecraft, Leng Spider, The Shadow Out Of Time 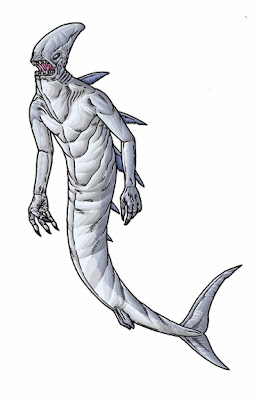 OBLONG SWIMMER
"'Do you remember,” he shouted, “what I told you about that ruined city in Indo-China where the Tcho-Tchos lived? You had to admit I’d been there when you saw the photographs, even if you did think I made that oblong swimmer in darkness out of wax. If you’d seen it writhing in the underground pools as I did. . . ."
H.P. Lovecraft & Hazel Heald, The Horror In the Museum

Email ThisBlogThis!Share to TwitterShare to FacebookShare to Pinterest
Labels: H.P. Lovecraft, Hazel Heald, Oblong Swimmer, The Horror In the Museum 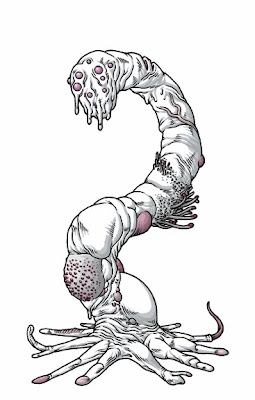 WHITE POLYPOUS THING
"There were legends of a hidden lake unglimpsed by mortal sight, in which dwelt a huge, formless white polypous thing with luminous eyes."
H.P. Lovecraft, The Call Of Cthulhu 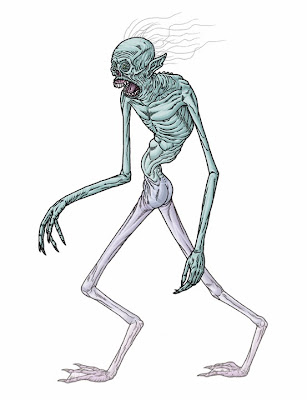 ITHAQUA
"Lloigor, Zhar and Ithaqua shall ride the spaces among the stars and shall ennoble those who are their followers, who are the Tcho-Tcho; Cthugha shall encompass his dominion from Fomalhaut; Tzathoggua shall come from N'kai..."
H.P. Lovecraft & August Derleth, The Lurker At the Threshold

"A large thing, I am told, vaguely like a man, yet infinitely unlike him. Details are very distorted and unreliable. It is said to have been an air elemental, but there are weird hints of something of incredible age, that rose out of hidden fastness in the far north, from a frozen and impenetrable plateau up there."

"Another puzzling factor is the appearance, far off to one side of this point in the trail, in a line with the wandering footsteps of the three travelers, of a huge imprint, closely resembling the foot of a man-but certainly a giant-which appears to have been made by an unbelievably large thing, and the foot, though like that of a man, must have been webbed!"
August Derleth, The Thing That Walked On the Wind

"And it did not have a white color, but rather a blue-green tint shading
away into purple."
August Derleth, Ithaqua

Email ThisBlogThis!Share to TwitterShare to FacebookShare to Pinterest
Labels: August Derleth, H.P. Lovecraft, Ithaqua, The Lurker At the Threshold, The Thing That Walked On the WInd 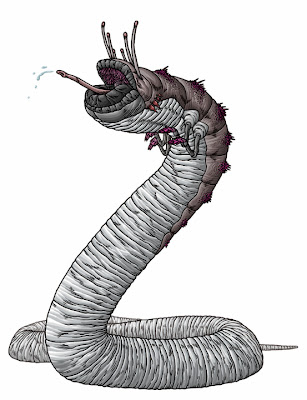 THE WORM
"Gyyagin vardar!' I screamed. 'Servant of Yogsoggoth, the Nameless One! The Worm from beyond Space! Star Eater! Blinder of Time! Verminis! Now comes the Hour of Filling, the Time Of Rending! Verminis! Alyah! Alyah! Gyyagin!"

"A huge black maw was discovered beneath; Cal tottered on the edge, his hands held out, his face distended in a wordless scream that I shall hear forever."

"And then there was a huge surge of gray, vibrating flesh. The smell became a nightmare tide. It was a huge outpouring of viscid, pustulant jelly, a huge and awful form that seemed to skyrocket from the very bowels of the ground. And yet, with a sudden horrible comprehension which no man can have known, I perceived that it was but one ring, one segment, of a monster worm that had existed eyeless for years in the chambered darkness beneath that abominated church!"
Stephen King, Jerusalem's Lot

"There, securely wedged between two century-old editions of Shakespeare, stood a great black volume with iron facings. Upon it, in hand-engraved lettering, was the inscription, De Vermis Mysteriis, or 'Mysteries of the Worm."'
Robert Bloch, The Shambler From the Stars

"There is tangible proof—in the form of marginal notes—that I went minutely through such things as the Comte d’Erlette’s Cultes des Goules, Ludvig Prinn’s De Vermis Mysteriis, the Unaussprechlichen Kulten of von Junzt, the surviving fragments of the puzzling Book of Eibon, and the dreaded Necronomicon of the mad Arab Abdul Alhazred."
H.P. Lovecraft, The Shadow Out Of Time

Email ThisBlogThis!Share to TwitterShare to FacebookShare to Pinterest
Labels: Great Old One, H.P. Lovecraft, Jerusalem's Lot, Robert Bloch, Stephen King, The Shadow Out Of Time, The Shambler From the Stars, The Worm 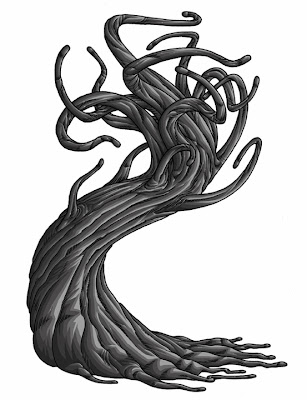 NYOGTHA (NYARLATHOTEP)
"Men knew him as the Dweller in Darkness, that brother of the Old Ones called Nyogtha, the Thing that should not be. He can be summoned to Earth's surface through certain secret caverns and fissures, and sorcerers have seen him in Syria and below the black tower of Leng; from the Thang Grotto of Tartary he has come ravening to bring terror and destruction among the pavilions of the great Khan."
"He dreamed of Salem, and of a dimly glimpsed, gelatinous black thing that hurtled with frightful speed through the streets, a thing like an incredibly huge, jet black amoeba that pursued and engulfed men and women who shrieked and fled vainly."
"The disk was lifted, flung aside, and a great wave of iridescent blackness, neither liquid nor solid, a frightful gelatinous mass, came pouring straight for Leigh."
Henry Kuttner, The Salem Horror

"It was the eldritch scurrying of those fiend-born rats, always questing for new horrors, and determined to lead me on even unto those grinning caverns of earth's centre where Nyarlathotep, the mad faceless god, howls blindly to the piping of two
amorphous idiot flute-players."
H. P. Lovecraft, The Rats In the Walls
"It is His wood-The Wood of N'gai, the terrestrial abode of the Blind, Faceless One, the Howler In the Night, the Dweller in Darkness, Nyarlathotep, who fears only Cthugha."
August Derleth, The Dweller In Darkness

Email ThisBlogThis!Share to TwitterShare to FacebookShare to Pinterest
Labels: August Derleth, Great Old One, H.P. Lovecraft, Henry Kuttner, Nyarlathotep, Nyogtha, The Dweller In Darkness, The Rats In the Walls, The Salem Horror 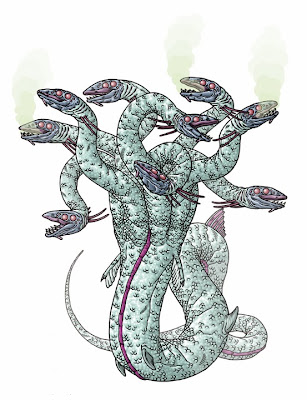 MOTHER HYDRA
'“Yield up enough sacrifices an’ savage knick-knacks an’ harbourage in the taown when they wanted it, an’ they’d let well enough alone. Wudn’t bother no strangers as might bear tales aoutside—that is, withaout they got pryin’. All in the band of the faithful—Order o’ Dagon—an’ the children shud never die, but go back to the Mother Hydra an’ Father Dagon what we all come from onct—Iä! Iä! Cthulhu fhtagn! Ph’nglui mglw’nafh Cthulhu R’lyeh wgah-nagl fhtagn—”'
H.P. Lovecraft, The Shadow Over Innsmouth

"The Hydra was said to be the progeny of the monstrous Echidne and Typhon. It was described as a vast, dog-like body from which sprouted, according to different sources, nine, fifty, a hundred, or even a thousand serpents' heads whose breath stank with poison."

"The Hydra was later used to equate with the monstrous apocalyptic beasts in the Book Of Revelations Of Saint John in the Christian New Testament scriptures. In this interpretation the Hydra was said to be the adversary of Saint Michael the archangel at the final battle before the Day Of Judgement. In this guise the Hydra was usually portrayed as a two-legged dragon with as many as nine heads, but otherwise looking like a Wyvern."
Carol Rose, Giants, Monsters and Dragons

Email ThisBlogThis!Share to TwitterShare to FacebookShare to Pinterest
Labels: Great Old One, H.P. Lovecraft, Mother Hydra, The Shadow Over Innsmouth 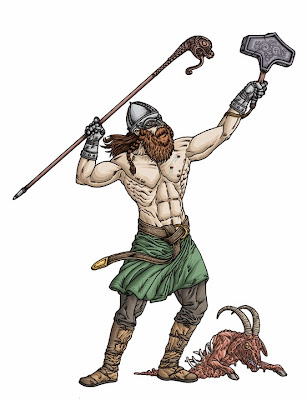 THOR
The mighty Woden laughs upon his throne,
And once more claims his children for his own.
The voice of Thor resounds again on high,
While arm'd Valkyries ride from out the sky
H.P. Lovecraft, The Teuton's Battle Song


"But a god must be more than well loved: he must show the attributes of godhead, and this Thor did, abundantly. By name and quality he was the thunder god, who rumbled in his goat drawn chariot across the heavens and was armed with the thunderbolt in the shape of his short-handled hammer Mjollnir. Red-bearded, massive of frame, enormously strong, he was cast in a protecting role for Asgard and the gods and by implication for
Midgard and the race of men."

"It was Red Thor, not Odinn, who stood out against White Christ. It was the hammer, not the spear, which warded off the cross."
Gwyn Jones, The Vikings


"Thor has two he-goats, that are called Tanngrisnir and Tanngnjóstr, and a chariot wherein he drives, and the he-goats draw the chariot;"

He has also three things of great price: one is the hammer Mjöllnir, which the Rime-Giants and the Hill-Giants know, when it is raised on high; and that is no wonder, it has bruised many a skull among their fathers or their kinsmen. He has a second costly thing, best of all: thegirdle of might; and when he clasps it about him, then the godlike strength within him is increased by half. Yet a third thing he has, in which there is much virtue: his iron gloves; he cannot do without them when he uses his hammer-shaft. But no one is so wise that he can tell all his mighty works; yet I can tell thee so much tidings of him that the hours would be spent before all that I know were told."

"About evening, Thor took his he-goats and slaughtered them both; after that they were flayed and borne to the caldron. When the cooking was done, then Thor and his companion sat down to supper. Thor invited to meat with him the husbandman and his wife, and their children: the husbandman's son was called Thjálfi, and the daughter Röskva. Then Thor laid the goat-hides farther away from the fire, and said that the husbandman and his servants should cast the bones on the goat-hides. Thjálfi, the husbandman's son, was holding a thigh-bone of the goat, and split it with his knife and broke it for the marrow. "Thor tarried there overnight; and in the interval before day he rose up and clothed himself, took the hammer Mjöllnir, swung it up, and hallowed the goat-hides; straightway the he-goats rose up, and then one of them was lame in a hind leg."
Gylfaginning

"On his way to meet the giant, Thor spends the night with a friendly giantess,
who lends him her magic staff."
Heather O'Donoghue, From Asgard To Valhalla: The Remarkable History Of Norse Myths