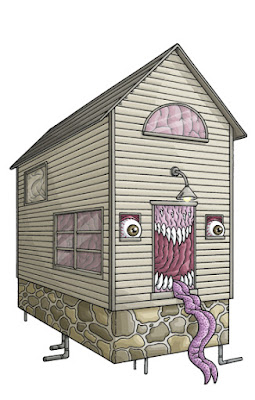 GARDINEL
“They look some way like a shed or cabin, snug and rightly made, except the open door might could be a mouth, the two little windows could be eyes. Never you'll see one on the main roads or near towns; only back in the thicketty places, by high trails among tall ridges, and they show themselves there when it rains and storms and a lone farer hopes to come to a house to shelter him. ... The few that's lucky enough to have gone into a gardinel and win out again... tell that inside it's pinky-walled and dippy-floored, with on the floor all the skulls and bones of those who never did win-out; and from the floor and walls come spouting rivers of wet juice that stings. ... and all at once you know that inside a gardinel is like a stomach.”
Manly Wade Wellman, Why They’re Named That
Posted by Michael Bukowski at 10:00 AM No comments: 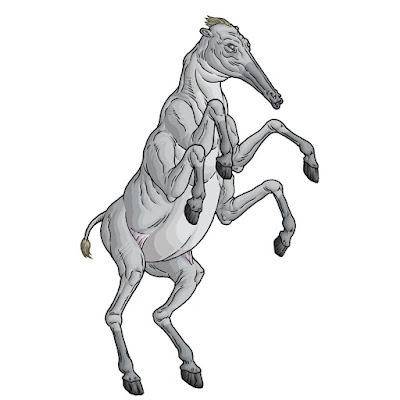 CULVERIN
"But, just ahead of him, the Culverin hoved itself half into sight on its many legs. It pointed its needle-shaped mouth and spit a pebble. I heard the pebble ring on Mr. Yandro's head."
Manly Wade Wellman, The Desrick On Yandro

Email ThisBlogThis!Share to TwitterShare to FacebookShare to Pinterest
Labels: Manly Wade Wellman, The Desrick on Yandro 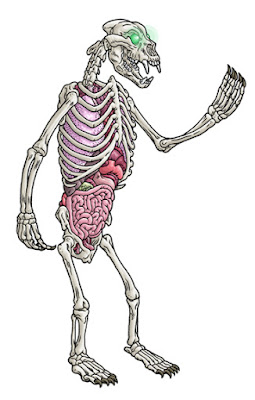 KALU
"And then: 'Bones, yes - something like man-bones, but bigger and thicker, also something like bear-bones, or big ape-bones from a foreign land. And a rotten light to them. So I was for a moment that the bones weren't empty. Inside the ribs were caged puffy things, like guts and lungs and maybe a heart that skipped and wriggled. The skull had a snout like I can't say what, and in its eye-holes burned blue-green fire.'"

This monster will be available in the Appalachian Compendium
ON SALE THIS FRIDAY SEPTEMBER 15TH 11AM EST
IN THE YOG-BLOGSOTH STORE!
(Limited to 20)
Posted by Michael Bukowski at 10:00 AM No comments: 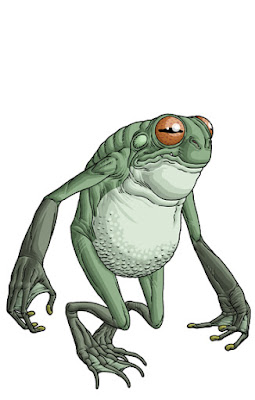 DJIBAW
"All blotchy and green and brown with a white belly and a wet smoothness, it was a frog. But it was bigger than a man by twice, I suppose." “You think of him as what we call a djibaw, and evil spirit. We think of him as a part of nature, that defends nature's weak things.”
Manly Wade Wellman, Frogfather 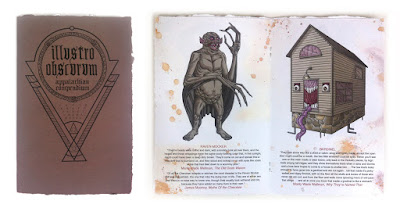 This week my Manly Wade Wellman themed monster zine will go on sale! Limited to 20! I'll be posting a monster from the zine Monday-Thursday before the sale!

AVAILABLE THIS FRIDAY SEPTEMBER 15TH 11AM EST
IN THE YOG-BLOGSOTH STORE!
LIMITED TO 20!

Also if you didn't make it out to NecronomiCon you can listen to our live presentation of
Stories From The Borderland on The Outer Dark. Click here and jump to the 1hour 26minute mark to hear myself, Jeanne D'Angelo, Scott Nicolay and Anya Martin talk about this cool project!

There's also a youtube slide show you can watch along with our talk that you can get here!

Posted by Michael Bukowski at 12:00 AM No comments: 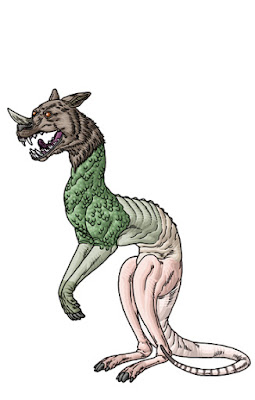 BUNYIP
"The Bunyip is said to be an amphibious animal, and is variously described: sometimes as a gigantic snake; sometimes as a species of rhinoceros, with a smooth pulpy skin and a head like that of a calf; sometimes as a huge pig, its body yellow, crossed with black stripes."

"He was of a brownish colour, with a head something the shape of a kangaroo, an enormous mouth, apparently furnished with a formidable set of teeth, long neck, covered with a shaggy mane which reached halfway down his back; his hind quarters were under water, so that we could not get a full view of him, but if one may judge by what was seen, his weight must be fully equal to that of a very large bullock."

"The moon was dim for a moment or two. Nobody spoke, we pressed up the ridge side, then a hoarse smothered ejaculation burst from Long Charlie's lips, and as he spoke the moon shone forth again, and he shifted his lantern so that its gleam fell athwart the white prostrate form and upon a snake, brown and shiny and scaly and horrible, which uncoiled itself, and with a swift, wavy motion disappeared into the depths of the scrub."
Rosa Praed, The Bunyip
Read Scott's blog post about this story here.