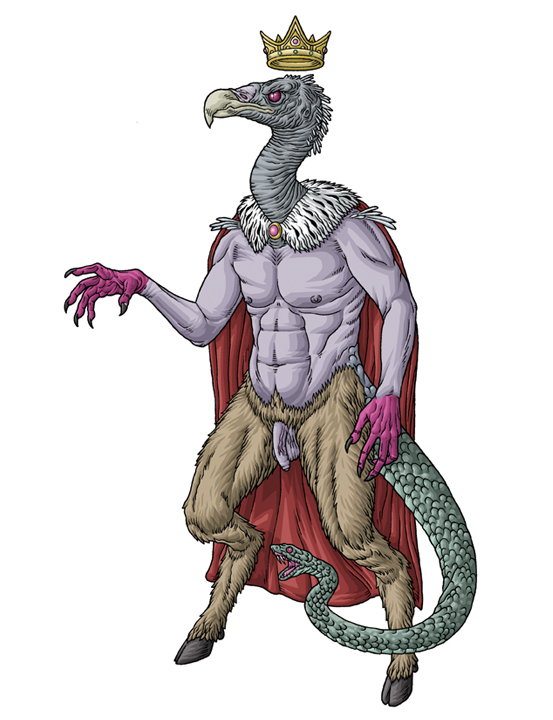 BUZRAEL
“It must be allow’d, that these Blasphemies of an infernall Train of Daemons are Matters of too common Knowledge to be deny’d; the cursed Voices of Azazel and Buzrael, of Beelzebub and Belial, being heard now from under Ground by above a Score of credible Witnesses now living."
H.P. Lovecraft, The Dunwich Horror 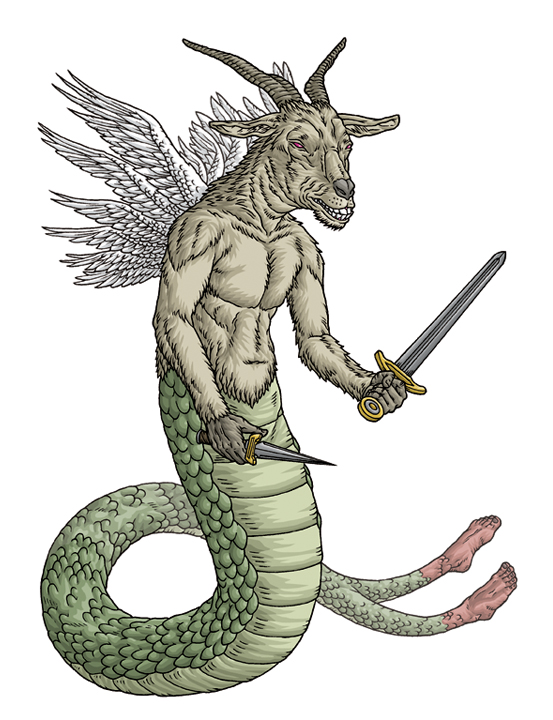 AZAZEL
“It must be allow’d, that these Blasphemies of an infernall Train of Daemons are Matters of too common Knowledge to be deny’d; the cursed Voices of Azazel and Buzrael, of Beelzebub and Belial, being heard now from under Ground by above a Score of credible Witnesses now living."
H.P. Lovecraft, The Dunwich Horror

“May you be the firebrand of the furnace of the earth! Go, Azazel, into the
untrodden parts of the earth. ”

"And standing behind the tree was one who had the aspect of a Serpent having hands and feet like those of a man, and wings on its shoulders, six pairs of wings, so that there were six wings on the right and six on the left."
The Apocalypse Of Abraham

"Azazel is guardian of goats. On the 10th day of September, on the feast of the Expiation, it was Jewish custom to draw lots for two goats: one for the Lord and the other for Azazel. The goat for the Lord was then sacrificed and its blood served as atonement."
Collin de Plancy, Dictionnaire Infernal

"And Azazel taught the people (the art of) making swords and knives."
The Book Of Enoch 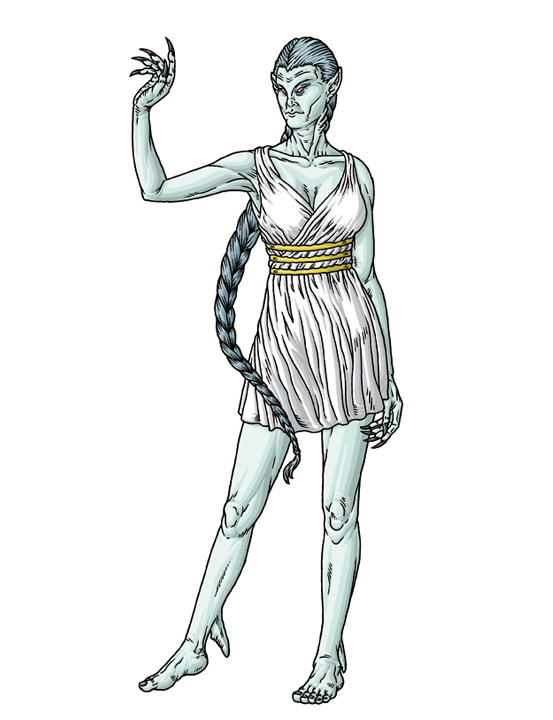 CALYPSO
"Six men are lost-O! dreadful cost
But he through danger slips.
At last from waves no ship he saves
But on Calypsos isle
He drifts ashore and more & more
He tarries for a while."
H.P. Lovecraft, The Poem Of Ulysses, or The Odyssey

"Only Odysseus was held elsewhere, pining for home and wife; the Nymphe Kalypso, a goddess of strange power and beauty, had kept him captive within her arching caverns, yearning for him to be her husband."

"O son of Kronos, father of us and sovereign ruler, if indeed the blessed gods now wish that shrewd Odysseus should come to his own land again, then let us instruct the radiant Hermes, the Messenger, to go to the island of Ogygia and without delay to tell the Nymphe of the braided tresses our firm decree that staunch Odysseus is to depart and journey home.’"
Homer, Odyssey 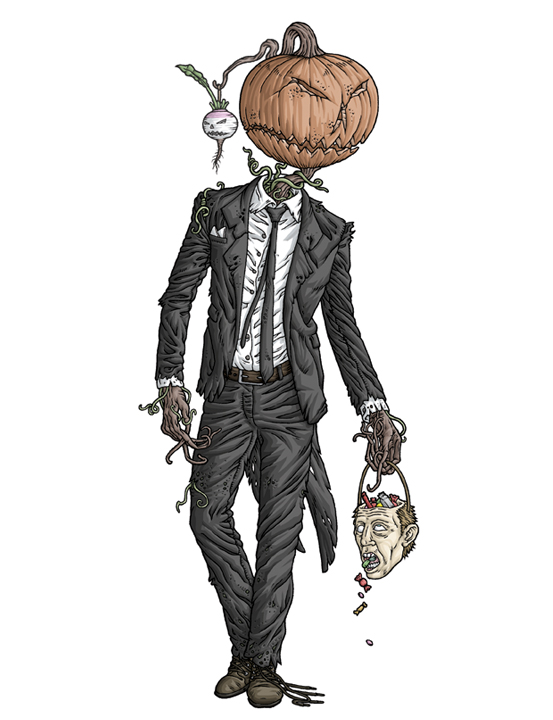 JACK O'LANTERN (NYARLATHOTEP)
"Jack O'Lantern is a figure from early Irish folklore. Originally, Jack was a mean, drunken man who was forsaken by both heaven and hell and cursed to restlessly wander the earth for all of eternity. He was given a magical coal by the devil which he used to light his way through the night."

"In reality, this forlorn figure is one of the many masks of Nyarlathotep. He may appear either as the misshapen, bug-eyed, wide-mouthed man or as a man with a grinning jack o'lantern for a head. He sometimes is seen in rags and sometimes in elegant dress clothes complete with tuxedo with tails."

"He was known to and feared by Druids, witches and other pagan peoples, but not worshiped. In the modern world his carved pumpkin lantern has become a symbol of Halloween."
Scott David Aniolowski, Malleus Monstrorum 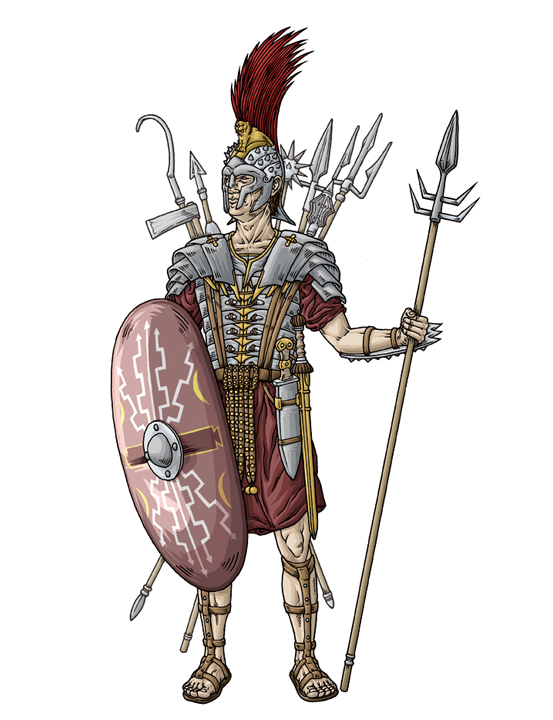 MARS
"From peace to luxury the step is slight,
And Venus reigns when Mars withdraws his might."
H.P. Lovecraft, The Isaacsonio-Mortoniad

"Mars, the god of war, was the son of Jupiter and Juno."
Thomas Bulfinch, Bulfinch's Mythology

"Ares was the great Olympian god of war, battlelust, civil order and manly courage. In Greek art he was depicted as either a mature, bearded warrior dressed in battle arms, or a nude beardless youth with helm and spear. Because of his lack of distinctive attributes he is often difficult to identify in classical art."
Aaron J. Atsma, The Theoi Project: Greek Mythology

"All the stories about Ares and his worship in the countries north of Greece seem to indicate that his worship was introduced in the latter country from Thrace; and the whole character of the god, as described by the most ancient poets of Greece, seems to have been thought little suited to be represented in works of art : in fact, we hear of no artistic representation of Ares previous to the time of Alcamenes, who appears to have created the ideal of Ares. There are few Greek monuments now extant with representations of the god; he appears principally on coins, reliefs, and gems. The Romans identified
their god Mars with the Greek Ares."
Sir William Smith, Dictionary Of Greek and Roman Biography and Mythology

Email ThisBlogThis!Share to TwitterShare to FacebookShare to Pinterest
Labels: H.P. Lovecraft, The Isaacsonia-Martoniad 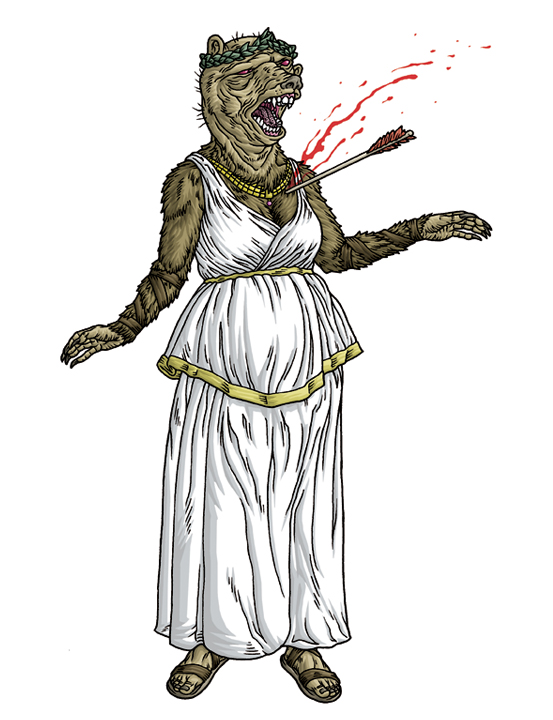 "Callisto, is sometimes called a daughter of Lycaon in Arcadia and sometimes of Nycteus or Ceteus. She was a huntress, and a companion of Artemis. Zeus, however, enjoyed her charms; and, in order that the deed might not become known to Hera, he metamorphosed her into a she-bear. But, notwithstanding this precaution, Callisto was slain by Artemis during the chase, through the contrivance of Hera."
Sir William Smith, Dictionary of Greek and Roman Biography and Mythology

THE QUEEN IN RED (NYARLATHOTEP) 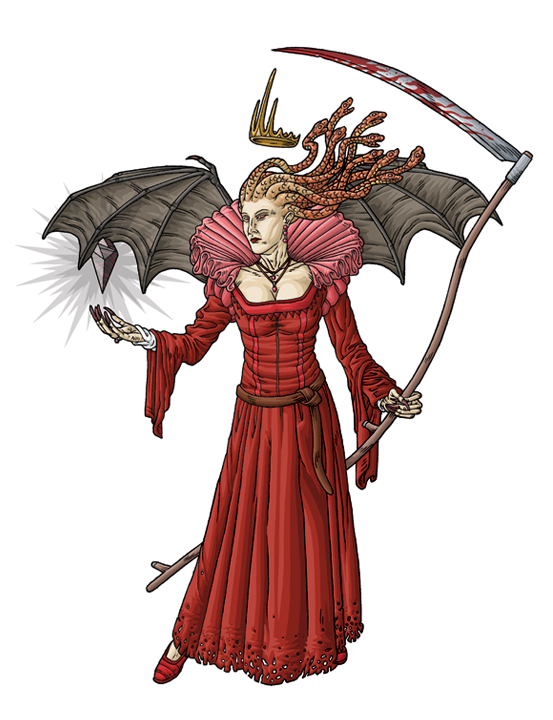 THE QUEEN IN RED (NYARLATHOTEP)
"The Queen In Red usually appears as a very beautiful and powerful woman. She is always dressed in regal crimson and lavishly adorned with gems and jewelry. At times she may appear as a horrible bat-winged, serpent haired, clawed woman with vicious fangs. In this form she wears filthy red robes and wields a gleaming scythe crimson with blood."
Scott David Aniolowski, Malleus Monstrorum 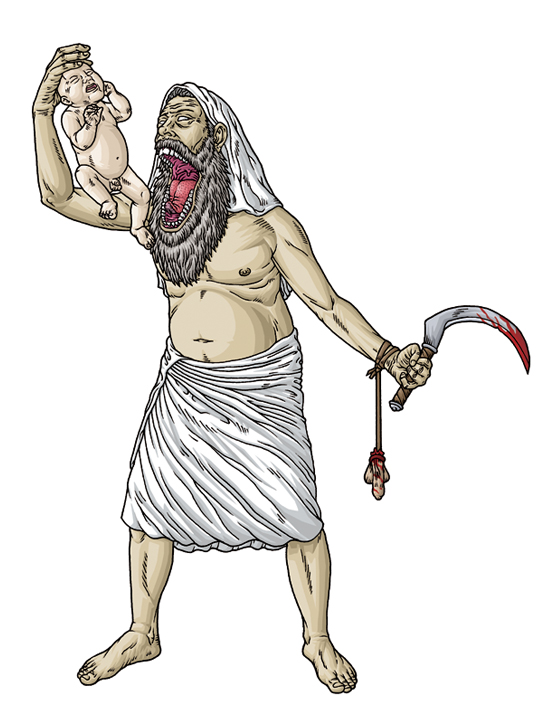 SATURN
"Etherial spirits of celestial grace;
And he, unspoil'd, may childlike bask again
Beneath the beams of Saturn's golden reign."
H.P. Lovecraft, Simplicity: A Poem

"Cronus, a son of Uranus and Ge, and the youngest among the Titans. At the instigation of his mother, Cronus unmanned his father for having thrown the Cyclopes, who were likewise his children by Ge, into Tartarus. Out of the blood thus shed sprang up the Erinnyes. The Romans identified their Saturnus with the Cronus of the Greeks."
Sir William Smith, Dictionary of Greek and Roman Biography and Mythology

"Men believe that Zeus . . . put his father Kronos in bonds because he wickedly devoured his children, and he in turn had mutilated his father for similar reasons."
Plato, Euthyphro 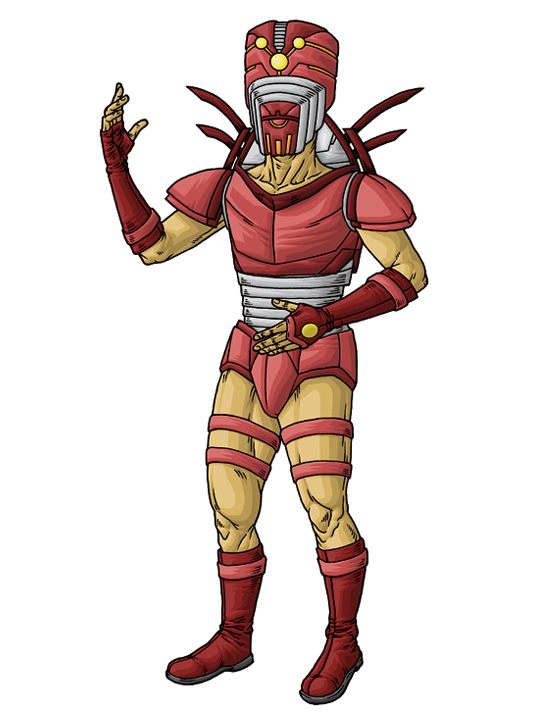 NATH-HORTHATH
"When he entered the city, past the bronze gates and over the onyx pavements, the merchants and camel-drivers greeted him as if he had never been away; and it was the same at the turquoise temple of Nath-Horthath, where the orchid-wreathed priests told him that there is no time in Ooth-Nargai, but only perpetual youth."
H.P. Lovecraft, Celephaïs 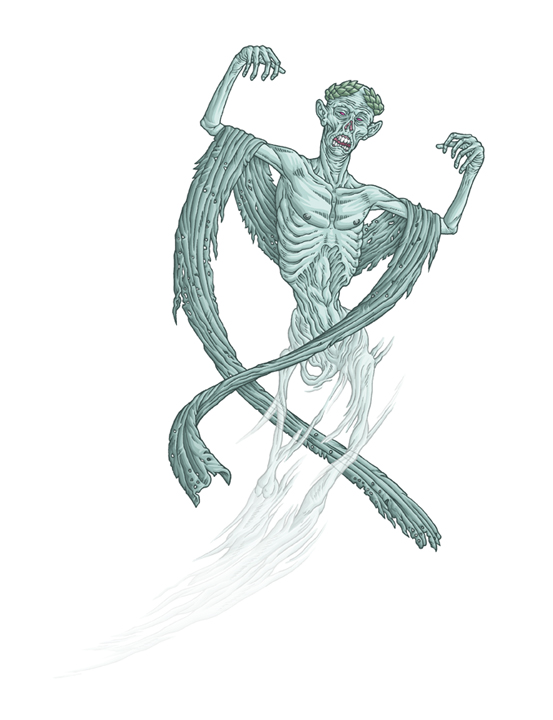 EREBUS
"I have haunted the tombs of the ages,
I have flown on the pinions of fear
Where the smoke-belching Erebus rages,
Where the jokulls loom snow-clad and drear;
And in realms where the sun of the desert consumed what it
never can cheer."
H.P. Lovecraft, Nemesis

"E′rebos, a son of Chaos, begot Aether and Hemera by Nyx, his sister. Hyginus and Cicero  enumerate many personifications of abstract notions as the offspring of Erebos. The name signifies darkness, and is therefore applied also to the dark and gloomy space under the earth, through which the shades pass into Hades."
Sir William Smith, Dictionary of Greek and Roman Biography and Mythology

"The name Erebos was also used for the dismal, netherworld realm of Haides."

"Erebus was the primeval god of darkness, consort of Nix, whose dark mists enveloped the edges of the world, and filled the deep hollows of the earth."
Aaron J. Atsma, The Theoi Project: Greek Mythology