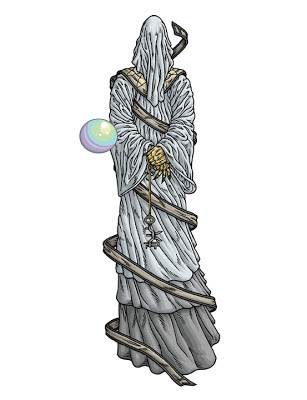 'UMR AT-TAWIL (YOG-SOTHOTH)
"There was another Shape, too, which occupied no pedestal, but which seemed to glide or float over the cloudy, floor-like lower level. It was not exactly permanent in outline, but held transient suggestions of something remotely preceding or paralleling the human form, though half as large again as an ordinary man. It seemed to be heavily cloaked, like the Shapes on the pedestals, with some neutral-coloured fabric; and Carter could not detect any eye-holes through which it might gaze. Probably it did not need to gaze, for it seemed to belong to an order of being far outside the merely physical in organisation and faculties."

"For this Shape was nothing less than that which all the world has feared since Lomar rose out of the sea and the Winged Ones came to earth to teach the Elder Lore to man. It was indeed the frightful Guide and Guardian of the Gate—’Umr at-Tawil, the ancient one, which the scribe rendereth the Prolonged of Life."

"At this reply the Guide seemed to make a sign by certain motions of his robe which may or may not have involved the lifting of an arm or some homologous member."

"Gradually and mistily it became apparent that the Most Ancient One was holding something—some object clutched in the outflung folds of his robe as if for the sight, or what answered for sight, of the cloaked Companions. It was a large sphere or apparent sphere of some obscurely iridescent metal, and as the Guide put it forward a low, pervasive half-impression of sound began to rise and fall in intervals which seemed to be rhythmic even though they followed no rhythm of earth."

"It was an All-in-One and One-in-All of limitless being and self—not merely a thing of one Space-Time continuum, but allied to the ultimate animating essence of existence’s whole unbounded sweep—the last, utter sweep which has no confines and which outreaches fancy and mathematics alike. It was perhaps that which certain secret cults of earth have whispered of as YOG-SOTHOTH, and which has been a deity under other names; that which the crustaceans of Yuggoth worship as the Beyond-One, and which the vaporous brains of the spiral nebulae know by an untranslatable Sign—yet in a flash the Carter-facet realised how slight and fractional all these conceptions are."
H.P. Lovecraft & E.Hoffman Price, Through the Gates Of the Silver Key

Email ThisBlogThis!Share to TwitterShare to FacebookShare to Pinterest
Labels: E. Hoffman Price, H.P. Lovecraft, Through the Gates Of the Silver Key 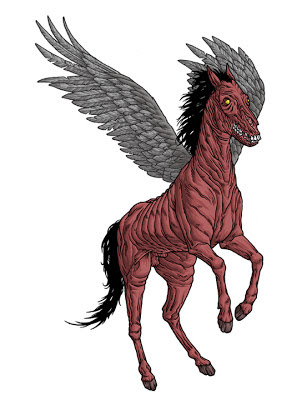 PEGASUS
With this grave retinue he trod the grove
And pray’d the Fauns he might a Poe-et prove.
But sad to tell, ere Pegasus flew high,
The not unrelish’d supper hour drew nigh;
Our tuneful swain th’ imperious call attends,
And soon above the groaning table bends."
H.P. Lovecraft, The Poe-et's Nightmare

"But when Perseus had cut off the head of Medousa there sprang from her blood stout-hearted Khrysaor and the horse Pegasos so named from the pegai (springs) of Okeanos, where he was born."
Hesiod, Theogony

"While deep sleep held fast Medusa and her snakes, he [Perseus] severed her head clean from her neck; and from their mother's blood swift-flying Pegasus and his brother [Khrysaor] sprang."
Ovid, Metamorphoses 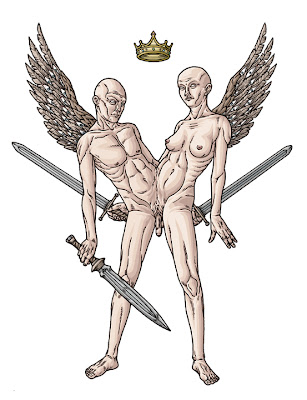 BELIAL
"Madness rides the star-wind . . . claws and teeth sharpened on centuries of corpses . . . dripping death astride a Bacchanale of bats from night-black ruins of buried temples of Belial. . . ."
H.P. Lovecraft, The Hound

"The Sixty-eighth Spirit is Belial. He is a Mighty and a Powerful King, and was created next after Lucifer. He appeareth in the Form of Two Beautiful Angels sitting in a Chariot of Fire. He speaketh with a Comely Voice, and declareth that he fell first from among the worthier sort, that were before Michael, and other Heavenly Angels."

"Belial came last; than whom a Spirit more lewd
Fell not from Heaven, or more gross to love,
Vice for itself. To him no temple stood
Or altar smoked; yet who more oft than he
In temples and at altars, when the priest
Turns atheist, as did Eli’s sons, who filled
With lust and violence the house of God?"
John Milton, Paradise Lost

"But for corruption thou hast made Belial, an angel of hostility. All his dominions are in darkness, and his purpose is to bring about wickedness and guilt. All the spirits that are associated with him are but angels of destruction."
The War Of the Sons Of Light and the Sons Of Darkness, Dead Sea Scrolls

Email ThisBlogThis!Share to TwitterShare to FacebookShare to Pinterest
Labels: H.P. Lovecraft, The Hound

Hey everyone. Just a quick update. I just did a really cool interview with David Johansen Rodger that you can read here. It's specifically about HPL as an influence.
Also, next Monday starts two weeks worth of new monsters, including (actually starting with) one of the most NSFW images I've ever drawn.

I've decided to do preorders for Illustro Obscurum combo packs. There will be a pack of Volumes I, II & III and a combo pack of Volumes II & III. You will be able to preorder as soon as the next batch of monsters is over, so probably around the second week of November.

Thanks!!
Posted by Michael Bukowski at 5:35 PM No comments:

Hey guys, sorry for the delay but I've been busy. I had a poster to do for an upcoming Earth and Balmorhea show in Arizona.

I was asked to do something occult related but not satanic. I opted for a subject from one of my favorite occult texts, The Goetia.

"Goetia refers to a practice which includes the invocation of angels or the evocation of demons, and usage of the term in English largely derives from the 17th-century grimoire The Lesser Key of Solomon, which features an Ars Goetia as its first section. It contains descriptions of the evocation of seventy-two demons, famously edited by Aleister Crowley in 1904 as The Book of the Goetia of Solomon the King." 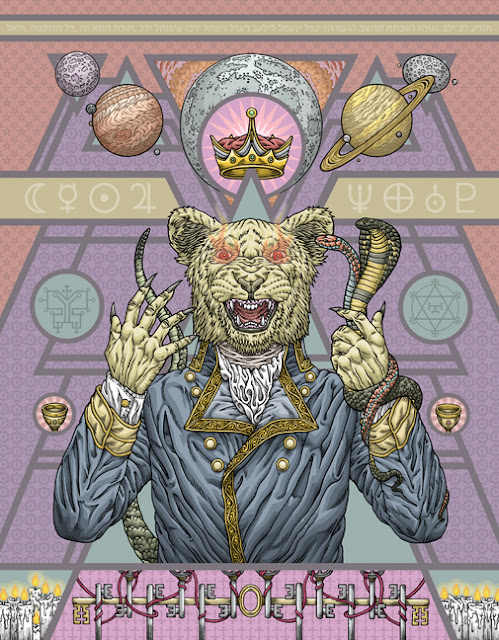 The piece I did is based on the demon Orias.
"The Fifty-ninth Spirit is Oriax, or Orias. He is a Great Marquis, and appeareth in the Form of a Lion with a Serpent’s Tail; and he holdeth in Hand two Great Serpents hissing. His Office is to teach the Virtues of the Stars, and to know the Mansions of the Planets, and how to understand their Virtues."

Since I like the idea so much I decided to do a version with no text for my friend Ryann's upcoming group show to benefit the WWF (World Wildlife Fund not World Wrestling Federation, they lost that lawsuit a while back). The idea was to make a piece that featured an endangered animal or habitat. Well, lions are listed as "vulnerable" and so are King Cobras. The San Francisco Garter Snake is actually listed as endangered. Anyway, the show is called Countdown to (En)Danger and the opening is this Saturday at B2. If you're in the Philadelphia area you should totally check it out. There are some amazing artists participating including Jeanne D'Angelo (her pieces is seriously stunning).

Anyway, in Yog-Blogsoth news (which is probably why you're here), I've been working on a bunch of really obscure new gods for the site including the most NSFW drawing I've ever done. Like, I wasn't sure if it was ok to draw it when I first had the idea. There will also be a long needed redraw in there too. Expect those the week of Halloween!

I'll also have Illustro Obscurum Vol. III ready for purchase for Christmas (what could be more blasphemous?). I'm thinking about doing another combo pack of Vol. I, II & III but maybe with preorders so I know how many to make? What do you guys think? Honestly, I have no idea so your comments will be very appreciated.

Lastly, if you guys are interested in creepy, weird stuff, I started a new tumblr that's just pictures of dead stuff and monsters I've seen traveling. It's called Corpse Altar, check it out.

Posted by Michael Bukowski at 10:30 AM 8 comments: