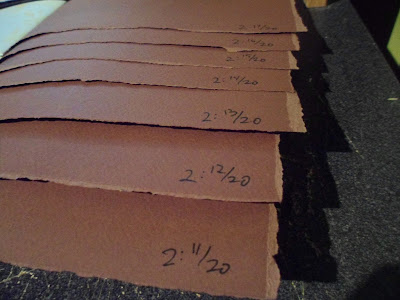 All Illustro Obscurum orders went out either Tuesday or Thursday this past week. Thanks to everyone who bought one! Volume IV is being assembled as we speak.

ONLY 5 COPIES AVAILABLE!!!
Posted by Michael Bukowski at 10:50 AM No comments: 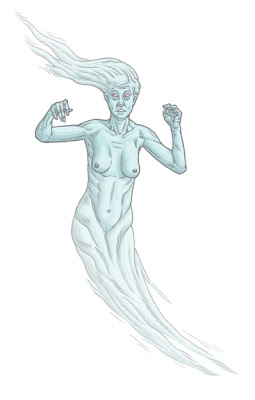 SYLPH
"While graceful Sylphs, admiring, lend
Their praises as thy feet descend."
H.P. Lovecraft, The Spirit Of the Summer

"Sylphs are spirits of the air and winds, described as taller and stronger than humans with a volatile and unreliable temperament. They are also described as being the transformed souls of those who died as virgins, whether male or female."
Carol Rose, Spirits, Fairies, Leprechauns and Goblins

Email ThisBlogThis!Share to TwitterShare to FacebookShare to Pinterest
Labels: H.P. Lovecraft, The Spirit Of the Summer 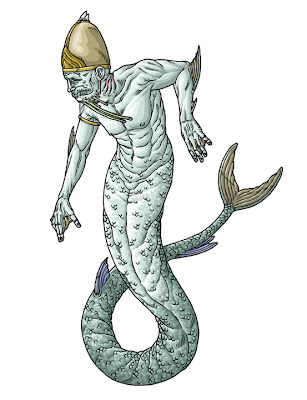 DAGON
"Once I sought out a celebrated ethnologist, and amused him with peculiar questions regarding the ancient Philistine legend of Dagon, the Fish-God; but soon perceiving that he was hopelessly conventional, I did not press my inquiries."
H.P. Lovecraft, Dagon

"It was represented under a monstrous combination of a human head, breast, and arms, joined to the belly and tail of a fish."
Dr. Robert Jamieson, A.R. Fausset & David Brown, Commentary On the Whole Bible

I don't usually do updates during a monster week, but this is
too good to pass up...

Today the first part of my guest appearance on the Clark Ashton Smith podcast, The Double Shadow, went up. Listen to it here and check out how I make an ass out of myself.

Smith has always been my second favorite author of weird fiction, and I've gone out of my way to illustrate some of his creations on this blog. This story (The Testament Of Athammaus) is my absolute favorite. As we discuss in the episode, it's kind of like his take on the Dunwich Horror. Which means it's 100x's more insane than HPL's idea. 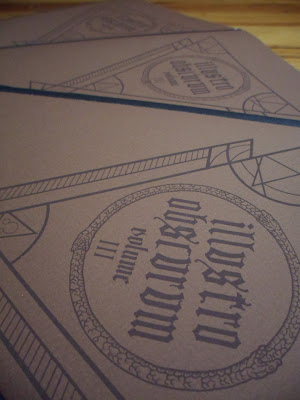 ONLY 5 COPIES AVAILABLE!!!
Posted by Michael Bukowski at 10:24 AM No comments: 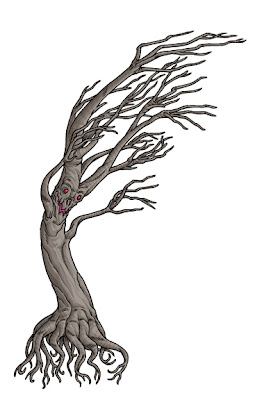 LIVING TREE
Methought the stunted trees with hungry arms
Grop'd greedily for things I dar not name;
The while a stifling, wraith-like noisomeness
Fill'd all the dale, and spoke a larger life.
H.P. Lovecraft, The Poe-et's Nightmare 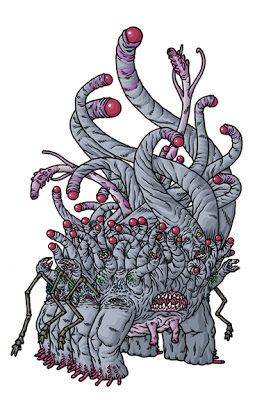 
"They's prints in the rud, Mis' Corey - great raound prints as big as barrel-heads, all sunk dawon deep like a elephant had ben along, only they's a sight more nor four feet could make!""Bigger’n a barn...all made o’ squirmin’ ropes...hull thing sort o’ shaped like a hen’s egg bigger’n anything, with dozens o’ legs like hogsheads that haff shut up when they step...nothin’ solid abaout it—all like jelly, an’ made o’ sep’rit wrigglin’ ropes pushed clost together...great bulgin’ eyes all over it...ten or twenty maouths or trunks a-stickin’ aout all along the sides, big as stovepipes, an’ all a-tossin’ an’ openin’ an’ shuttin’...all grey, with kinder blue or purple rings... an’ Gawd in heaven—that haff face on top!...”

" 'Oh, oh, my Gawd, that haff face - that haff face on top of it... that face with the red eyes an' crinkly albino hair, an' no chin, like the Whateleys... It was a octopus, centipede, spider kind o' thing, but they was a haff-shaped man's face on top of it, an' it looked like Wizard Whateley's, only it was yards an' yards acrost....' "
H.P. Lovecraft, The Dunwich Horror 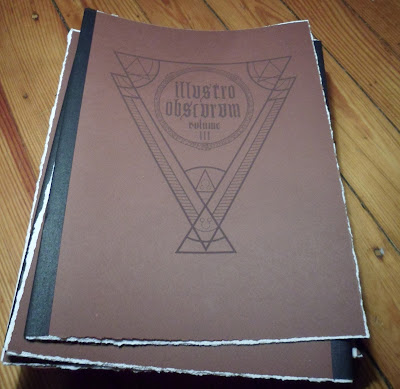 Tomorrow, Friday, March 22nd at 11am, EST the second edition of Illustro Obscurum Volume III will go on sale!

Then, there will be two weeks of new monsters, and after that Volume IV will be completed and ready for sale! The covers for that are already printed and the interior is mostly laid out. Get ready!

Also, my last (for now) contribution to The Official Handbook Of the Marvel Universe Reduxe blog is done and now up on the site! 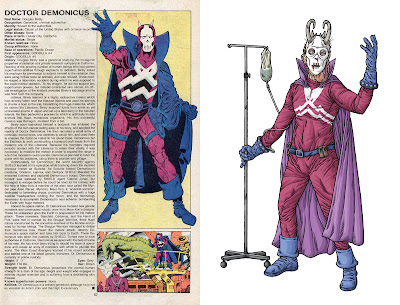 In other news, I did an interview about this blog and Illustro Obscurum for the online war gaming magazine, The Campaigner. There's a sample above but you can get the full article by clicking here. 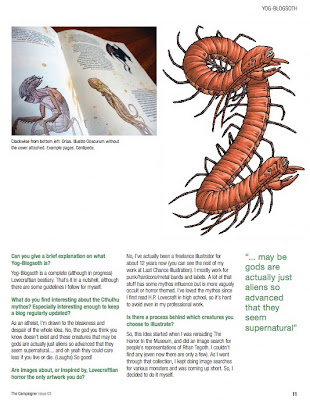 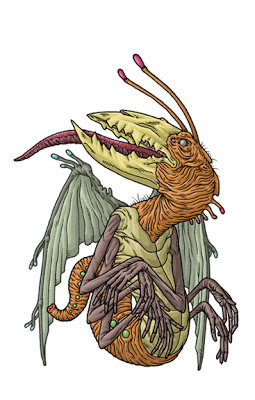 BYAKHEE
"There flapped rhythmically a horde of tame, trained, hybrid winged things ... not altogether crows, nor moles, nor buzzards, nor ants, nor decomposed human beings, but something I cannot and must not recall."
H.P. Lovecraft, The Festival

Email ThisBlogThis!Share to TwitterShare to FacebookShare to Pinterest
Labels: H.P. Lovecraft, The Festival 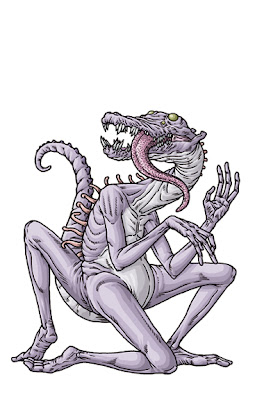 CROCODILE-HEADED BEAST
“And God! The shapes of nightmare that float around in that perpetual daemon twilight! The blasphemies that lurk and leer and hold a Witches’ Sabbat with that woman as a high-priestess! The black shaggy entities that are not quite goats—the crocodile-headed beast with three legs and a dorsal row of tentacles—and the flat-nosed aegipans dancing in a pattern that Egypt’s priests knew and called accursed."
H.P. Lovecraft & Zealia Bishop, Medusa's Coil 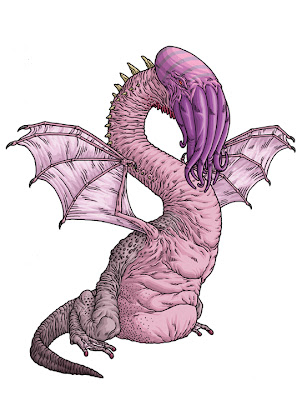 OSSADOGOWAH
"It had ye Name Ossadogowah, which signifi'd ye childe of Sadogowah, ye which is held to be a Frightfull Spirit spoke of by antients as come down from ye Stars and being formelry worshipt in Lands to ye North."

"Dewart stared in fascination; he could discern eyes or pits of eyes, and what must certainly be a mouth of a kind, together with a vast dome-like forehead-but there the semblance to anything human ceased, and the nebulous outline trailed off in a hideous representation of what seemed to be tentacles."

"As I turned away and rose to make my way to the kitchen, my eyes involuntarily sought the leaded window, and I received a profound and frightening shock, for the last red sunlight lay upon the stained glass in such a way as to outline in that place an unutterably hideous caricature of an inhuman face of some great, grotesque being whose features were horribly distorted, eyes-if such there were-sunken into pits, without anything resembling a nose, though there seemed to be nostrils; a bald and gleaming head, the entire lower half of which terminated in a mass of writhing tentacles;"

"The second type of mark was claw-like, of the dimensions of approximately three feet across and the suggestion of being webbed; and the third was a sinister brushed patch on the snow, framing the claw-marks, as if great wings had flapped there-but what manner of wings was not apparent."
H.P. Lovecraft & August Derleth, The Lurker At the Threshold

Email ThisBlogThis!Share to TwitterShare to FacebookShare to Pinterest
Labels: August Derleth, H.P. Lovecraft, The Lurker At the Threshold 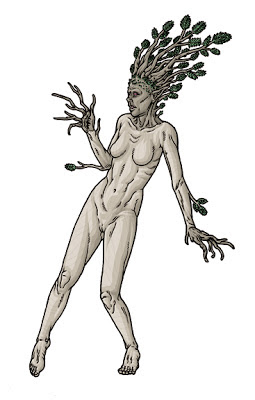 OREAD
"Shy Oreads lur'd from distant hills
By melodies of reedy rills,
Ethereal Dryads from the wood,
And river-gods in festive mood,
All fir'd with Corybantian glee
To dance, aerial Nymph for thee!"
H.P. Lovecraft, The Spirit Of the Summer

"As for the child, as soon as he sees the light of the sun, the deep-breasted Mountain (oreskôoi) Nymphai [i.e. Oreiades] who inhabit this great and holy mountain (Ida) shall bring him up. They rank neither with mortals nor with immortals: long indeed do they live, eating ambrosia and treading the lovely dance among the immortals, and with them the Seilenoi and the sharp-eyed Argeiphontes (Hermes) mate in the depths of pleasant caves; but at their birth pines or high-topped oaks spring up with them upon the fruitful earth, beautiful, flourishing trees, towering high upon the lofty mountains (and men call them holy places of the immortals, and never mortal lops them with the axe); but when the fate of death (moira thanatoio) is near at hand, first those lovely trees wither where they stand, and the bark shrivels away about them, and the twigs fall down, and at last the life of the Nymphe and of the tree leave the light of the sun together."
Greek epic C7th or 6th B.C., Homeric Hymn 5 to Aphrodite 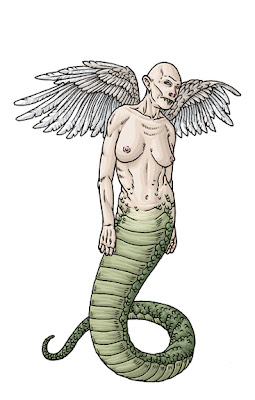 GENIUS
"Of late I climb'd a lonely height
And Wat'd the moon-streak'd clouds in flight,
Whose forms fantastic reel'd and whirl'd
Liked Genii of a spectral world."
H.P. Lovecraft, A Cycle Of Verse: Clouds


"The name of a group of spirits in the classical Roman, Etruscan, and Assyrian mythologies. They are essentially guardian spirits of the individual beings and phenomena that have been created. A Genius (Genii, plural) was assigned to each individual at birth. The Genius of each man (women were protected by Juno) controlled his character and destiny, eventually conducting his soul out of the mortal world. They were variously depicted as naked winged youths, while the Genius of a family in Pompeii was protrayed as a snake."
Carol Rose, Spirits, Fairies, Leprechauns and Goblins

So, now that all those sketch and redrawing posts are done I thought I'd give you a bit of an update as to why this has been an especially long hiatus. Aside from my trip to the Czech Republic/Slovakia, this past weekend Jeanne and I and our friend Davidson went to the Dominican Republic for the last weekend of Carnaval in the town of La Vega. They have an especially awesome carnaval tradition there, where they dress up in elaborately hand made demon costumes and hit people with "vejigas".  It's basically Caribbean Krampus mixed with Philadelphia Mummers. It was insane. Below are a probably just a third of the Diablos Cojuelos (Limping Devil) we saw (keep in mind each team had about 5-7 members dressed in the same costumes!).  Starting next week, as the new Lovecraft monsters post, I'll be posting a ton of pictures on my Corpse Altar tumblr, if you're interested. 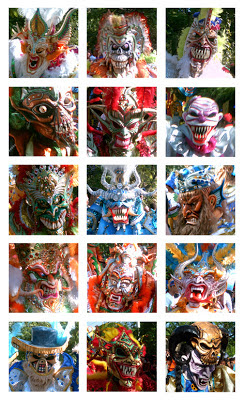 Hope that excuses the long wait and that you guys like the new stuff!
Posted by Michael Bukowski at 11:55 AM No comments:

Here are bunch of redraws. Most of them are subtly different, where I wanted better line work, more vibrant color or adjustments to anatomy. However, there are a few (like the Mi-Go and the Yakubian) where the monsters got a complete overhaul. Check em out. 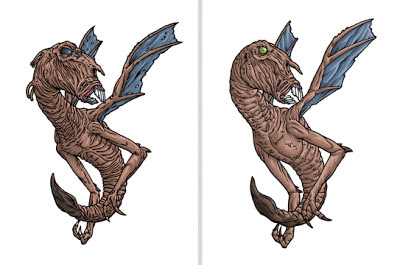 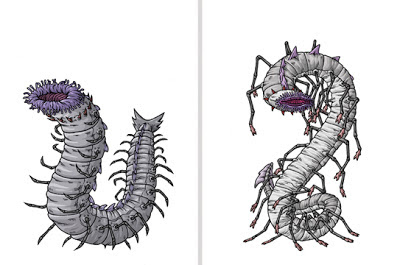 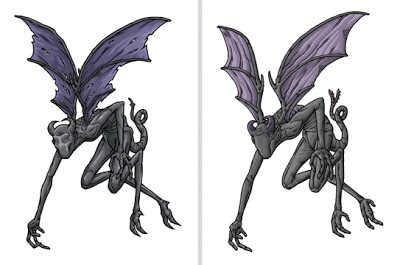 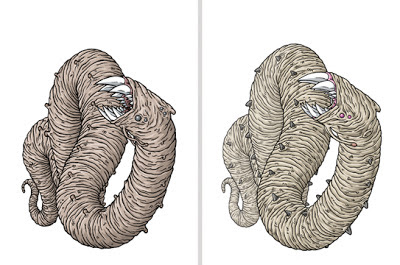 Don't forget next week is the start of three weeks worth of all new drawings!

Posted by Michael Bukowski at 10:36 AM 3 comments: