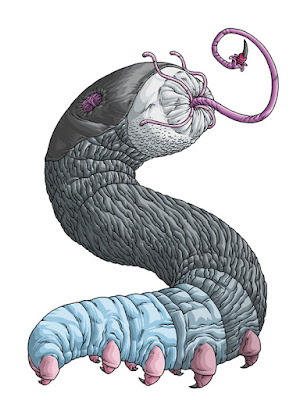 NEGOTIUM PERAMBULANS
Night would soon fall, and it was then that the mountainous blasphemy lumbered upon its eldritch course. Negotium perambulans in tenebris. . . . The old librarian rehearsed the formulae he had memorised, and clutched the paper containing the alternative one he had not memorised.
H.P. Lovecraft, The Dunwich Horror

"In the entry stood the figure of a robed priest holding up a Cross, with which he faced a terrible creature like a gigantic slug, that reared itself up in front of him. "

"Below ran the legend "Negotium perambulans in tenebris" from the ninety-first Psalm. We should find it translated there, "the pestilence that walketh in darkness," which but feebly rendered the Latin."

"The Thing had entered and now was swiftly sliding across the floor towards him, like some gigantic caterpillar. A stale phosphorescent light came from it, for though the dusk had grown to blackness outside, I could see it quite distinctly in the awful light of its own presence. From it too there came an odour of corruption and decay, as from slime that has long lain below water. It seemed to have no head, but on the front of it was an orifice of puckered skin which opened and shut and slavered at the edges. It was hairless, and slug-like in shape and in texture. As it advanced its fore-part reared itself from the ground, like a snake about to strike, and it fastened on him ..."
E.F. Benson, Negotium Perambulans

As I said yesterday, one of the reasons that I haven't posted on the blog in January is because I was busy with commissions. Today I'm gonna give you a rundown of what I was working on and what's scheduled for 2016.

First off, I completed two illustrations for AdeptiCon '16. A shirt design and a smaller design for pint glasses, etc. 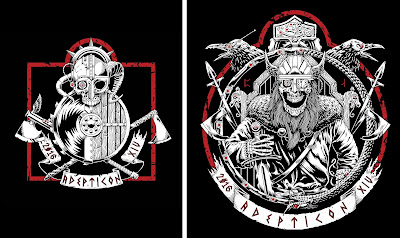 I was also commissioned by Lethe Press to draw the creature from Hammer's The Lost Continent for a secret project. This is the 5th illustration I've done for them. 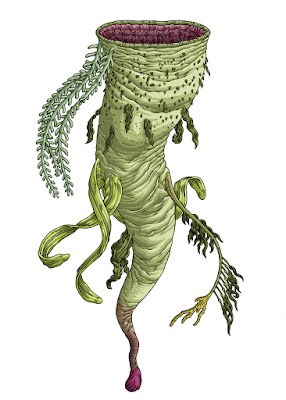 I'm also excited about this logo for a podcast that will explore the works of author Robert Aickman. 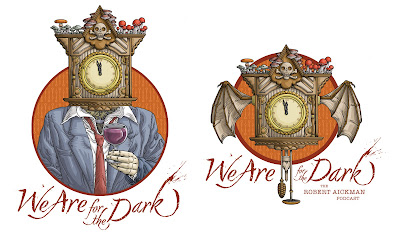 As far as what's coming up, there's a lot! I can only really talk about the Seventh Church Ministries projects so here's a tentative list of what's in the works for 2016

On top of all this, I'll be posting a few monsters at the end of this week, including a re-rendering of an oldie and a brand new, extremely obscure HPL monster!

Hey everyone! Sorry it's been quiet here for the first month of 2016 but I've been super busy with commissions. I thought I'd give a new round up and then let you know what's up next.

Last year was an extremely productive year for me. While that's awesome, and I'm by no means complaining, it did mean that I failed to meet my self proclaimed "Year Of 100 Monsters" goal. I did however, manage to illustrate 89 monsters including collaborations with Simon Strantzas, Kaaron Warren, Nathan Ballingrud and Jason McKittrick for my Nyarlathotep series as well as five creatures for my new Stories From the Borderlands project with Scott Nicolay. 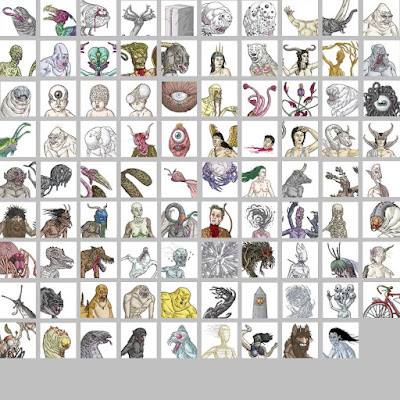 On top of that, I did illustrations for Scott Nicolay's "after" (Dim Shores), Richard Gavin's "Fume" (Dunham's Manor), Bill Coberly's short story "Cassilda's Songs" (Unwinnable 60) and Michael Wehunt's "Greener Pastures" (Shock Totem)! I posted the cover for Nicolay's "after" but I never posted the interiors, so here's all those pieces together at once! 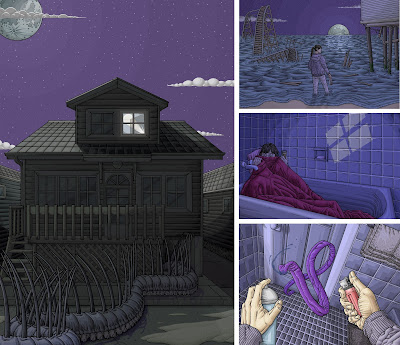 Unfortunately, I can't post the art for Michael Wehunt's collection yet but rest assured I'll be making a big stink about it when the time comes. I'm extremely happy with how the piece turned out. 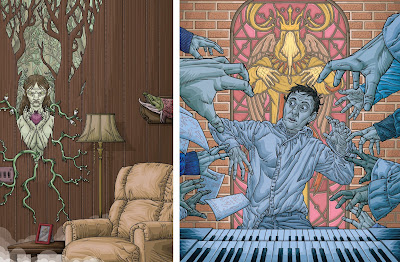 I was also commissioned to do an illustration and a spot illustration for Matthias Weeks' entries in a  DCC Mega Zine as well as a piece for Jason McKittrick's Parcel Of Terror! 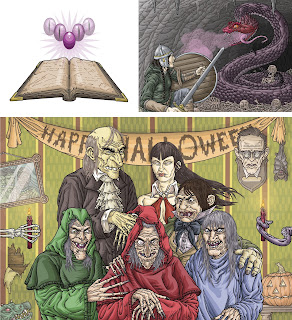 There were also these pieces I did for the Ars Necronomica show during NecronomiCon, an ad for Seventh Church Ministries and a bonus print based on a Ramsey Campbell Hallween-themed short story.

Speaking of Seventh Church Ministries, 2015 saw the release of three gorgeous zines by Jeanne D'Angelo (Unclean Spirits), Sam Heimer (The Legend Of Sleepy Hollow) and James Quigley aka Gunsho (Goetia Vol. 1) as well as four Illustro Obscurum volumes including Book Of One Thousand Forms (my collaboration with Jason McKittrick), Peklo Compendium (companion to Unclean Spirits), Revelations Of Gla'aki (NecronomiCon exclusive) and The Initiate's Compendium (an exclusive for Cadabra Records). 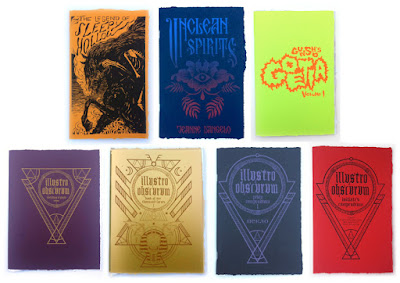 Tomorrow I'll be posting images of what I've been working on in January as well as upocming Seventh Church Ministries releases and info on the next batch of monsters to post on the blog!

Posted by Michael Bukowski at 12:59 PM No comments: