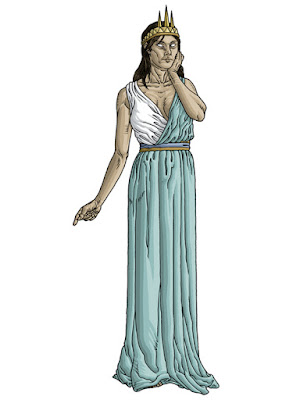 "POLYHYMNIA, a daughter of Zeus, and one of the nine Muses. She presided over lyric poetry, and was believed to have invented the lyre. In works of art she was usually represented in a pensive attitude."
Aaron J. Atsma, The Theoi Project: Greek Mythology 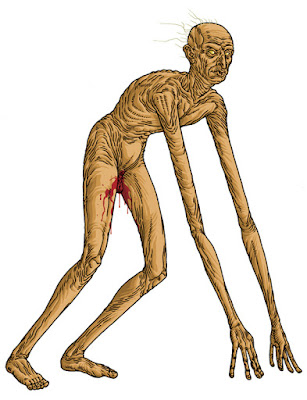 URANUS
"In Tartarus the Titans writhe, and beneath the fiery Aetna groan the children of Uranus and Gaea."
H.P. Lovecraft & Anna Helen Crofts, Poetry And the Gods

"And Ouranos came, bringing on night and longing forlove, and he lay about Gaia spreading himself full upon her. Then the son from his ambush stretched forth his left hand and in his right took the great long sickle with jagged teeth, and swiftly lopped off his own father's members and cast them away to fall behind him."
Hesiod, Theogony

"May the great wide bronze sky (ouranos) fall upon me from above, the fear of earth-born men."
Theognis, Fragment 1. 869

"OURANOS (Uranus) was the primordial god (protogenos) of the sky. The Greeks imagined the sky as a solid dome of brass, decorated with stars, whose edges descended to rest upon the outermost limits of the flat earth. Ouranos was the literal sky, just as his consort Gaia (Gaea) was the earth."

"Ouranos does not appear in early Greek art but Egyptian depictions of their sky-goddess Nut demonstrate how he was imagined--as a gigantic, star-spangled man with long arms and legs, resting on all fours, with his finger-tips in the far east, his toes in the far west, and his arching body raised to form the dome of the sky."
Aaron J. Atsma, The Theoi Project: Greek Mythology 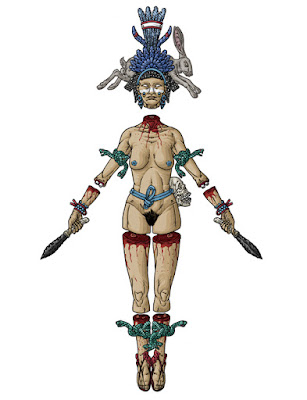 METZTLI
"The searchers had found the place only because of the chanting and the final cry. It had been close to five that morning, and after an all-night encampment the party had begun to pack up for its empty-handed return to the mines. Then somebody had heard faint rhythms in the distance, and knew that one of the noxious old native rituals was being howled from some lonely spot up the slope of the corpse-shaped mountain. They heard the same old names—Mictlanteuctli, Tonatiuh-Metzli, Cthulhutl, Ya-R’lyeh, and all the rest—but the queer thing was that some English words were mixed with them."
H.P. Lovecraft, The Electric Executioner

"The Aztec goddess named 'golden bells' was among Coatlicue's children, who tried to kill their mother rather than let her bear rivals to them. Coyolxauhqui tried to warn her mother, so her siblings decapitated her and threw her head into the night sky.  A grieving Coatlicue place Coyolxauhqui's shining head in the night sky. Coyolxauhuqui may have descended from the older moon goddess Metztli, who had two phases: One that promoted growth, another that discouraged it."
Patricia Monaghan, Encyclopedia of Goddesses and Heroines

"From that day forward, Metztli, the moon, was forever dimmer than the sun, his face permanently marked with the imprint of the rabbit, visible in pattern of light and dark patches on the full moon. Metztli was sometimes portrayed as a goddess rather than a god, and though she controlled fertility, she also represented night, dampness, and cold."
Tamra Andrews, Dictionary Of Nature Myths: Legends of the Earth, Sea and Sky

"The dying Coatlicue gave birth to Huitzilopochtli, who, armed with his xiuhcoatl weapon, dismembered Coyolxauhqui and routed the Centzon Huitznahua at the hill of Coatepec."
Mary Miller & Karl Taube, The Gods and Symbols Of Ancient Mexico And The Maya 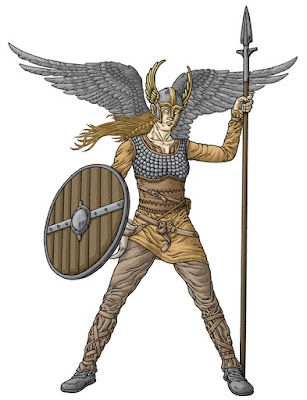 GEIRAVÖR
"The voice of Thor resounds again on high,
While arm'd Valyries ride from out the sky;
The Gods of Asgard all their powers release
To rouse the dullard from his dream of peace."
H.P. Lovecraft, The Teuton's Battle-Song


"Wise thought her the valkyrie; were welcome never
men to the bright-eyed one, her who the birds' speech knew well.
Greeted the light-lashed maiden,the lily-throated woman,
The hymir's-skull-cleaver as on cliff he was perching."
Þorbjörn Hornklofi, Hrafnsmál

These are called valkyries. Odin sends them to all battles, where they choose those who are to be slain, and rule over the victory. Gud and Rosta, and the youngest norn, Skuld, always ride to sway the battle and choose the slain. Jord, the mother of Thor, and Rind, Vale’s mother, are numbered among the goddesses."
Snorri Sturluson, The Prose Edda

"They favor the most heroic fighter: those most highly qualified to join the heroes already in Valhalla. Each Valkyry identifies such a man and urges him into the thickest of the fray, sharpening his bloodlust with her savage cries and bidding him to ignore the wounds which sap his strength. At last he falls to the weapons of his opponents, and his attendant Valkyry waits by the bleeding corpse."
Michael Page & Robert Ingpen, Encyclopedia Of Things That Never Were 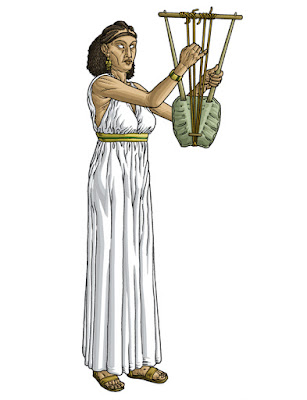 ERATO
"Fleet Pegasus th' enchanting music hears,
And beats his pinions, and pricks up his hears;
Whilst the skill'd Erato, with sacred lyre,
Joins in the strain, and feels the noble fire."
H.P. Lovecraft, R. Kleiner Laureatus In Heliconem 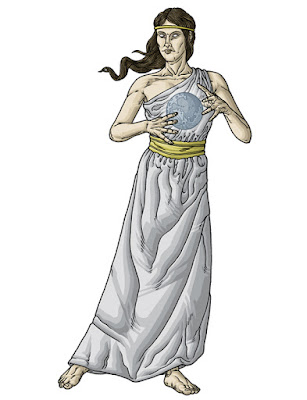 "OURANIA (Urania) was one of the nine Mousai, the goddesses of music, song and dance. In the Classical era, when the Mousai were assigned specific artistic and literary spheres, Ourania was named Muse of astronomy and astronomical writings. In this guise she was depicted with a celestial globe."
Aaron J. Atsma, The Theoi Project: Greek Mythology

Posted by Michael Bukowski at 10:03 AM No comments: