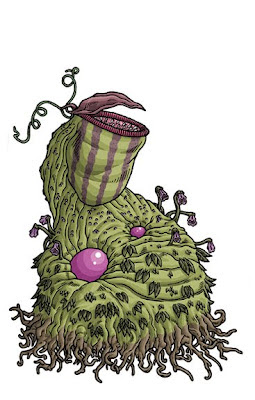 VEGETABLE ENTITY
"Later, as the earth's span closed, the transferred minds would again migrate through time and space-to another stopping-place in the bodies of the bulbous vegetable entities of Mercury."
H.P. Lovecraft, The Shadow Out Of Time

Email ThisBlogThis!Share to TwitterShare to FacebookShare to Pinterest
Labels: H.P. Lovecraft, The Shadow Out Of Time, Vegetable Entity 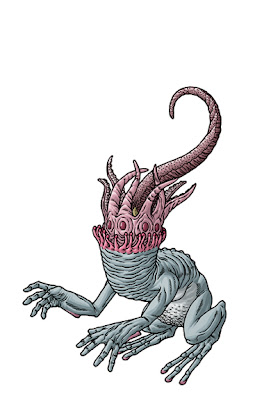 MOONBEAST
"For they were not men at all, or even approximately men, but great greyish-white slippery things which could expand and contract at will, and whose principal shape - though it often changed - was that of a sort of toad without any eyes, but with a curious vibrating mass of short pink tentacles on the end of its blunt, vague snout."
H.P. Lovecraft, Dream-Quest Of Unknown Kadath 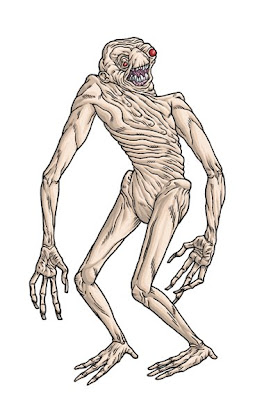 DIMENSIONAL SHAMBLER
"Shuffling toward him in the darkness was the gigantic, blasphemous form of a black thing not wholly ape and not wholly insect. Its hide hung loosely upon its frame, and its rugose, dead-eyed rudiment of a head swayed drunkenly from side to side. Its fore paws were extended, with talons spread wide, and its whole body was taut with murderous malignity despite its utter lack of facial expression."

"Coward—you could never face the dimensional shambler whose hide I put on to scare you—the mere sight of it alive, or even the full-fledged thought of it, would kill you instantly with fright! Iä! Iä! It waits hungry for the blood that is the life!”
H.P. Lovecraft & Hazel Heald, The Horror In the Museum

Email ThisBlogThis!Share to TwitterShare to FacebookShare to Pinterest
Labels: Dimensional Shambler, H.P. Lovecraft, Hazel Heald, The Horror In the Museum 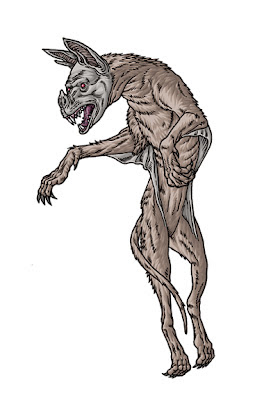 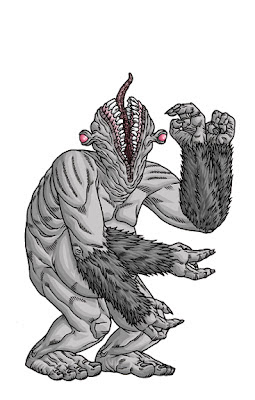 GUG
"It was a paw, fully two feet and a half across, and equipped with formidable talons. After it came another paw, and after that a great black-furred arm to which both of the paws were attached by short forearms. Then two pink eyes shone, and the head of the awakened gug sentry, large as a barrel, wabbled into view. The eyes jutted two inches from each side, shaded by bony protuberances overgrown with coarse hairs. But the head was chiefly terrible because of the mouth. That mouth had great yellow fangs and ran from the top to the bottom of the head, opening vertically instead of horizontally."
H.P. Lovecraft, Dream-Quest Of Unknown Kadath

I thought I'd delete all the previous posts about the zines so everyone could see the monsters more readily. That being said, here's a quick overview.

And lastly, thanks so much to everyone that bought a copy or tried to buy a copy, told their friends or bought copies for friends. I really appreciate it and it definitely means there will be future volumes. Please post comments to let me know you got your copy and how you like it.

I would also like to point out that as of now I've sent out/plan on sending out orders to USA, Canada, Ireland, UK, Australia, France, Germany, Italy, Estonia & Brazil!!