Hey guys, just a bit of news for you.
First off, there are still a handful of Pumpkin Faces In the Night prints: 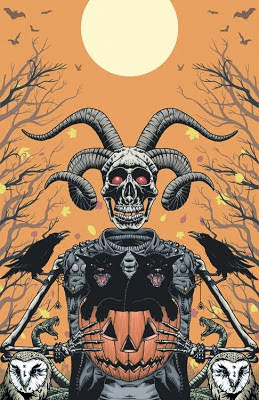 Head over to the Yog-Blogsoth store to pick one up!

So Illustro Obscurum Volume VI went on sale and sold out within 2 hours on Friday! I'm thinking about doing a reprint of Volumes V & VI in the near future so comment if you're interested so I can gauge how many I should get made.


Also there was a bit of a delay with the interior pages of Volume VI, so if you purchased it Friday it'll be a few days later than usual. Normally when I have them up for sale on Friday, I ship them out on Monday but this batch won't go out until Thursday. 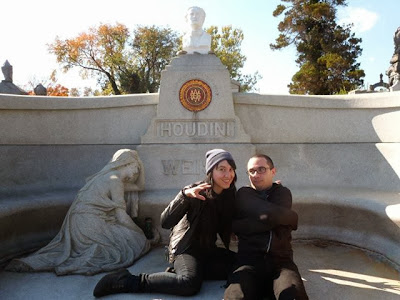 Finally, I spent the weekend in NYC doing some Halloween stuff and checked out a site that I think should be of interest to most HPL fans...Harry Houdini's grave! It's in an "abandoned" cemetery in Queens but it abuts 3 other cemeteries that are still in use, so if you can get into one you can easily walk into the others. Lovecraft famously ghost wrote Under the Pyramids for Houdini and I've been wanting to check out his grave for a while. Totally worth the trip!

Posted by Michael Bukowski at 11:11 AM 4 comments:

CHILDREN OF YULETIDE
The next few days will be cool news items before I post Illustro Obscurum Volume VI for sale on Friday October 25th at 11am EST.
I also wanted to announce that the same day at the same time I'll be putting prints of a Halloween piece for sale.

Lastly, November 15th is the opening for a group show I'm organizing called Children Of Yuletide. I'm really, really excited for this theme and lineup. Look at the artist list below, it's awesome! 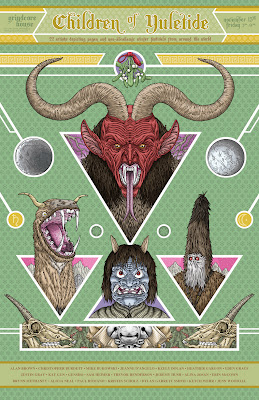 I did the poster above and it features a Krampus, Schnappviecher, Namahage and Babugeri which are all creatures from different countries' winter festivals, and the rest of the pieces in the show will have similar topics. 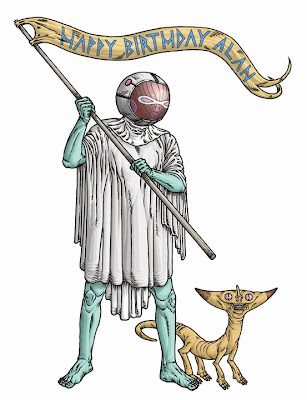 HAPPY BIRTHDAY ALAN BROWN!
For those of you that follow this blog, Alan's name may be familiar to you. Not only has he contributed to the Empty Night Skies benefit show that Jeanne D'Angelo and I curated, he's currently working on a piece for the Children Of Yuletide show I'm curating. Most likely though, you'll recognize him from the Guests In the Witch-House piece he did of Randolph Carter in Dreams Quest Of Unknown Kadath.

Anyway, he's one of the most tireless and talented people I know and he's a huge inspiration to me. This piece is based off a character and creature from his epic wordless  OVOYYAMAR comic which you should check out.

You can also buy prints from him here and support an amazingly talented dude!

Email ThisBlogThis!Share to TwitterShare to FacebookShare to Pinterest
Labels: Birthdays

It is with a heavy heart that I announce the passing of one Yog-Blogsoth's official mascots. Pyewackett Peter Cushing passed away this morning due to heart failure. He was an awesome affectionate dude, and the loss is taking it's toll. There will be a brief hiatus before the next half week's illustrations and Illustro Obscurum Volume VI is available....

"For the cat is cryptic, and close to strange things which men cannot see. He is the soul of antique Aegyptus, and bearer of tales from forgotten cities in Meroe and Ophir. He is the kin of the jungle’s lords, and heir to the secrets of hoary and sinister Africa. The Sphinx is his cousin, and he speaks her language; but he is more ancient than the Sphinx, and remembers that which she hath forgotten."
H.P. Lovecraft, The Cats Of Ulthar 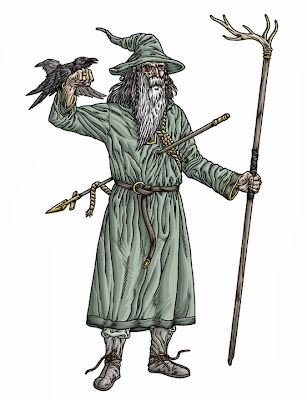 WODEN/ODIN
"My strength is waning; dimly can I see
The helmeted Valkyries close to me.
Ten more I slay! How strange the thought of fear,
With Woden's mounted messengers so near!"
H.P. Lovecraft, The Teuton's Battle-Song

"These is a myth of Odin’s acquiring runes by hanging on a tree and wounded by a spear, an offering to himself. He bows his head and looks down, perhaps into the deep, and takes up the runes, falling now from the tree to the ground. How he took up runes while hanging is not clear: perhaps a magical act is intended."

"In other Eddic attributes of Odin there is a further resemblance-his skill in arts, his mastery in magic, his description as a traveller. Like Mercury he was a god or leader of the dead. Both gods were depicted with hat and staff."

"Odin’s ring, Draupnir, “Dropper,” made by the dwarf Sindri and given by his brother to Odin, was so called because eight rings of the same weight dropped from it every ninth night."
John Arnott MacCulloch, The Mythology Of All Races

"The Scandinavian god Odin had human victims regularly offered to him, and these were put to death by being hung on a tree and stabbed with a spear. One of his titles was "God of the Hanged," or "Lord of the Gallows," and the Hamaval tells how when young, he was sacrificed to himself in the same way."
The Forest In Folklore and Mythology, Alexander Porteous


"I trow I hung on that windy
Tree nine whole days and nights,
stabbed with a spear, offered to Odin,
myself to mine own self given,
high on that Tree of which none hath heard
from what roots it rises to heaven."
Hávamál 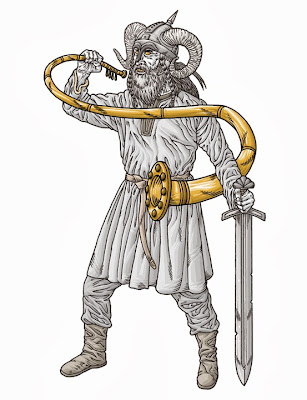 HEINDALL
"There to remain, till Heindall's horn shall sound,
And Ragnarok enclose creation round;
And Bifrost break beneath bold Surtur's horde,
And Gods and men fall dead beneath the sword;"
H.P. Lovecraft, The Teuton's Battle-Song

"In the Eddic poems he is “whitest of the gods,” and, like the Vanir, he knows the future.
Heimdall is “the man mighty in arms,” and, as watchman of the gods, he has a horn, the Gjallar-horn, which meanwhile rests under the ash Yggdrasil."

Snorri combines much of this and gives further details about Heimdall. He is “the white god,” great and holy, born of nine sisters. He is also called Hallinskidi, “ram”,
and Gullintani, “Golden teeth.”

"Grimm compared Heimdall at Heaven’s bridge to the angel guarding Paradise with a sword, and his horn blown before the Doom to the
trumpet blown by the angel at the Last Day."
John Arnott MacCulloch,  The Mythology Of All Races

"Of all the gods, Heimdall has the closest connection with an animal, namey, the ram. According to Skáldskaparmál, a form of his name, Heimdali, is a word for ram, and Heimdali and Hallinskídi turn up in the thurlur for ram."
Norse Mythology, John Lindow 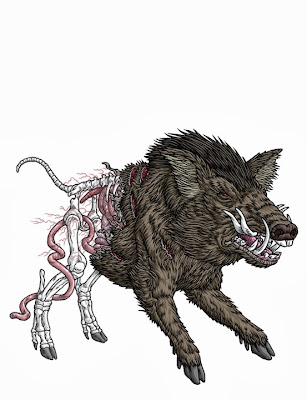 SCHRIMNIR
"Who cares to find the heaven of the priest,
When only warriors can with Woden feast?
The flesh of Schrimnir, and the cup of mead,
Are but for him who falls in martial deed"
H.P. Lovecraft, The Teuton's Battle-Song

"Valhalla is the great hall of Odin, wherein he feasts with his chosen heroes, all those who have fallen bravely in battle, for all who die a peaceful death are excluded. The flesh of the boar Schrimnir is served up to them, and is abundant for all. For although this boar is cooked every morning, he becomes whole again every night."
Thomas Bulfinch, Bulfinch's Mythology 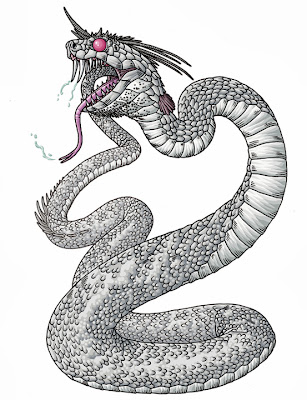 JÖRMUNGANDR
"With our swords have we contended!
Come but new to Gothland's shore
For the killing of the serpent
We have gaine'd from Thor"
H.P. Lovecraft, Regner Lodbrog's Epicedium

"For our blood is the same the vandals are vaunting;
We too are the stout sons of Woden and Thor;"

"So must we face the serpents that seek to destroy us,
And with spirit as light, ev'ry fiend overwhelm!"
H.P. Lovecraft, Ad Britannos-1918

"And Ragnarok enclose creation round;
And Bifrost break beneath bold Surtur's horde,
And Gods and men fall dead beneath the sword'
When sun shall die, and sea devour the land,
And stars descend, and naught but Chaos stand.
H.P. Lovecraft, The Teuton's Battle-Song

"The wolf Fenrir, whos jaws stretch from heaven to earth, breaks his fetters' the Midgard Snake, spewing poison, rises from the sea; Naglfar, the Ship of the Dead, made of the uncut nails of dead men, breaks from her moorings down in Hel."
Gwyn Jones, The Vikings

"The sea will rear up because Jormungand, the Midgard Serpent, is twisting and writhing in fury as he makes his way toward the land. With every breath, Jormungand will stain the soil and the sky with his poison. The waves caused by the serpent's emerging will set free the ship Naglfar, and with the giant Hymir as their commander,
the giants will sail towards the battlefield."
Micha F. Lindemans, Encyclopedia Mythica

"Jormungand is not the only serpent in Norse mythology but he is much the most fearsome. He is so vast that he actually encircles Midgard; all humankind is caught within his coil as he lies on the ocean bed, biting on his own tail."
Kevin Crossley-Holland, The Norse Myths 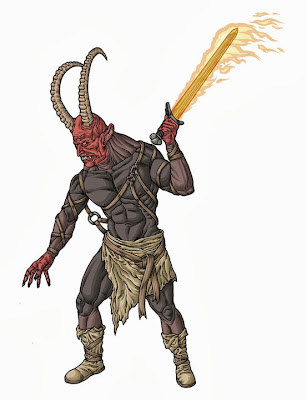 SURTUR
'There to remain til Heindall's horn shall sound,
And Ragnarok enclose creation round;
And Bifrost break beneath Surtur's horde,
And Gods and men fall dead beneath the sword;"
H.P. Lovecraft, The Teuton's Battle-Song

"After the individual gods have fallen, Surt casts fire over the earth and burns the entire world. The name Surt is used in poetry as a general name for a giant. It meant something like "black," as if he were charred"
John Lindow, Norse Mythology

"The fire giants, led by Surt, come riding out of Muspell, and as they approach Asgard the rainbow bridge Bifrost cracks under their weight."

"The sun grows dark, stars fall from the sky, the sea invades the land, Surt flings fire over all the world; heaven and earth, the whole universe are consumed,
and Earth sinks into the sea."
Gwyn Jones, The Vikings