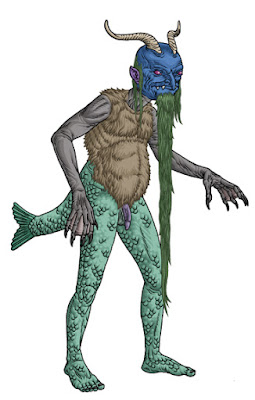 VODYANOI
"All these monsters stared about seeking him, but they could not find him, since he was protected by his sacred circle."
Nikolai Gogol, The Viy

"In appearance, the vodyanoi resembled a repulsive old man with hirsute body and long, matter hair and beard. It was frequently suggested that, like the devils in Russian icons, he looked black or that is body-hair was black. Some physical details, on the other hand, suggested the influence of the watery milieu in which he lived. Thus, his hair might be green or he might have webbed feet, a fishy tail, scaly skin. "
Elizabeth Warner, Russian Myths

"This is the name of a dangerous water being in the folklore and traditions of Russia. The Vodianoi, also called Vodyanoi, Vodyanoy or Vodnik, is variously described as an old man with a blue face, white beard and green hair; an old man covered in scales or fur with huge paws, glowing eyes, horns and a tail; or entirely as a grotesque fish."
Carol Rose, Giants, Monsters and Dragons

Posted by Michael Bukowski at 9:50 AM 2 comments: 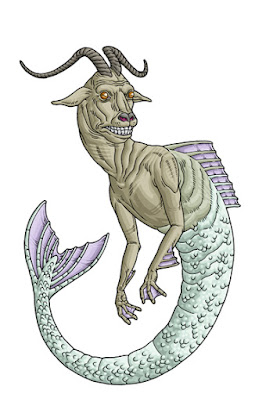 AEGIPAN
“And God! The shapes of nightmare that float around in that perpetual daemon twilight! The blasphemies that lurk and leer and hold a Witches’ Sabbat with that woman as a high-priestess! The black shaggy entities that are not quite goats—the crocodile-headed beast with three legs and a dorsal row of tentacles—and the flat-nosed aegipans dancing in a pattern that Egypt’s priests knew and called accursed."
H.P. Lovecraft & Zealia Bishop, Medusa's Coil

"In an instant every moving entity was electrified; and forming at once into a ceremonial procession, the nightmare horde slithered away in quest of the sound—goat, satyr, and aegipan, incubus, succuba, and lemur, twisted toad and shapeless elemental, dog-faced howler and silent strutter in darkness—all led by the abominable naked phosphorescent thing that had squatted on the carved golden throne, and that now strode insolently bearing in its arms the glassy-eyed corpse of the corpulent old man."
H.P. Lovecraft, The Horror At Red Hook

"Capricorn or Sea Goat. This sign resembles Aegipan, whom Jupiter (Zeus) wished to be put among the constellations because he was nourished with him, just as he put the goat nurse we have mentioned before. He, first, as Eratosthenes (Greek poet C3rd B.C.) says, when Jupiter attacked the Titanes, is said to have cast into the enemy the fear that is called 'panikos'. The lower part of his body has fish formation, because he hurled shellfish against the enemy, too, instead of stones."
Pseudo-Hyginus, Astronomica 2. 28 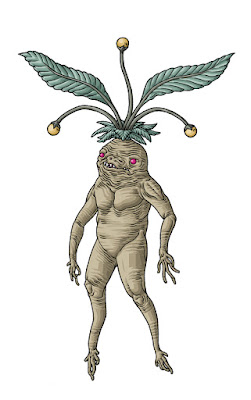 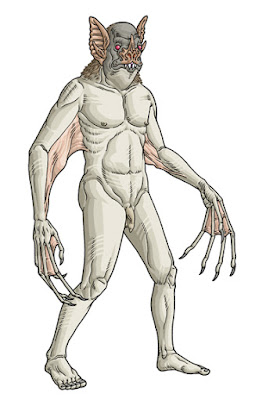 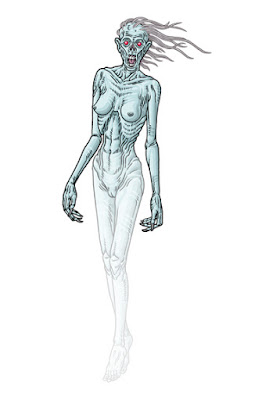 "The apparition or "double" of a living person, generally supoosed to be an omen of death. The wraith closely resembles its protoype in the flesh, even to the details of dress."
Lewis Spence, An Encyclopedia Of Occultism

Posted by Michael Bukowski at 5:55 PM No comments: 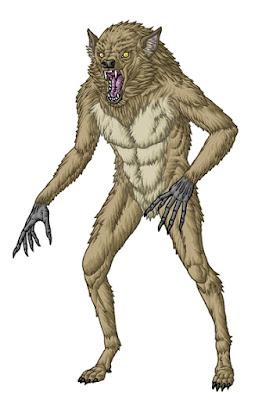 WEREWOLF
"Here howl by night the werewolves, and the souls
of those that knew me well in other days."
H.P. Lovecraft, Aletheia Phrikodes

"This is the name of a transformation of a human into a monstrous cannibal wolf."

"The Werewolf is essentially a human form during the day but transforms, according to different versions, either at the height of the full moon, or by donning a special wolf skin, or permanently by some curse."
Carol Rose, Giants, Monsters and Dragons

This was a redrawing in preparation for my first (of three!) book of monsters coming out through Lethe Press.

Posted by Michael Bukowski at 11:22 AM No comments: