Hey everyone! This is the first of two news posts. I just wanted to give you a heads up about two anthologies that I did the covers for. 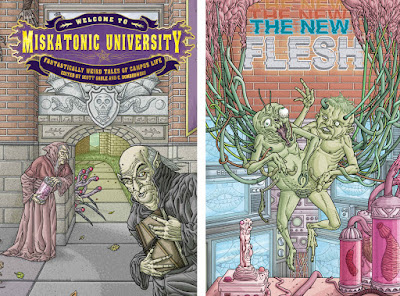 I'd highly recommend either of these collections since I've worked with both publishers before and I'm familiar with most of the authors involved.

Stay tuned because I'll be posting NecronomiCon news within the next few days!! 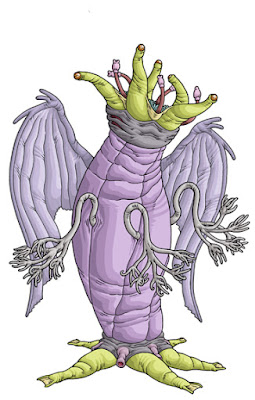 ELDER THING
"Objects are eight feet long all over. Six-foot five-ridged barrel torso 3.5 feet central diameter, 1 foot end diameters. Dark grey, flexible, and infinitely tough. Seven-foot membraneous wings of same colour, found folded, spread out of furrows between ridges. Wing framework tubular or glandular, of lighter grey, with orifices at wing tips. Spread wings have serrated edge. Around equator, one at central apex of each of the five vertical, stave-like ridges, are five systems of light grey flexible arms or tentacles found tightly folded to torso but expansible to maximum length of over 3 feet. Like arms of primitive crinoid. Single stalks 3 inches diameter branch after 6 inches into five sub-stalks, each of which branches after 8 inches into five small, tapering tentacles or tendrils, giving each stalk a total of 25 tentacles.

“At bottom of torso rough but dissimilarly functioning counterparts of head arrangements exist. Bulbous light-grey pseudo-neck, without gill suggestions, holds greenish five-pointed starfish-arrangement. Tough, muscular arms 4 feet long and tapering from 7 inches diameter at base to about 2.5 at point. To each point is attached small end of a greenish five-veined membraneous triangle 8 inches long and 6 wide at farther end. This is the paddle, fin, or pseudo-foot which has made prints in rocks from a thousand million to fifty or sixty million years old. From inner angles of starfish-arrangement project two-foot reddish tubes tapering from 3 inches diameter at base to 1 at tip. Orifices at tips. All these parts infinitely tough and leathery, but extremely flexible. Four-foot arms with paddles undoubtedly used for locomotion of some sort, marine or otherwise. When moved, display suggestions of exaggerated muscularity. As found, all these projections tightly folded over pseudo-neck and end of torso, corresponding to projections at other end."
H.P. Lovecraft, At the Mountains Of Madness

Email ThisBlogThis!Share to TwitterShare to FacebookShare to Pinterest
Labels: At the Mountains Of Madness, H.P. Lovecraft 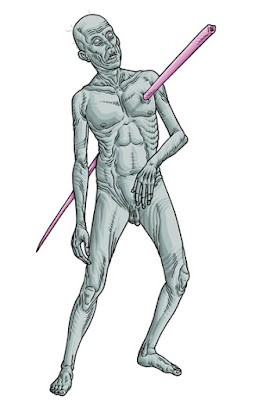 SERVITOR OF GLA'AKI
"But those in the cult certainly were supposed to have the real witches' marks. It was the long, thin spines which are supposed to cover the body of their god Glaaki. In the initiation ceremony the novice was held (sometimes willing, sometimes not) on the lake shore while Glaaki rose from the depths. It would drive one of its spines into the chest of the victim, and when a fluid had been injected into the body the spine detached from itself from the body of Glaaki."

Through the emission of impulses, perhaps magnetic, from the brain of Glaaki, the man was kept alive while he was controlled almost completely by the being."
Ramsey Campbell, The Inhabitant Of the Lake 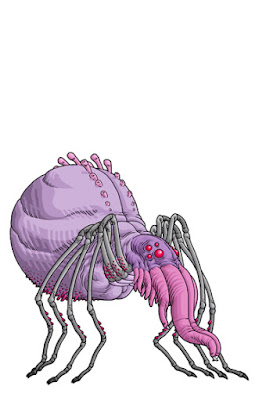 "Of earthly minds there were some from the winged, star-headed, half-vegetable race of palaeogean Antarctica; one from the reptile people of fabled Valusia; three from the furry pre-human Hyperborean worshippers of Tsathoggua; one from the wholly abominable Tcho-Tchos; two from the arachnid denizens of earth’s last age; five from the hardy coleopterous species immediately following mankind, to which the Great Race was some day to transfer its keenest minds en masse in the face of horrible peril; and several from different branches of humanity."
H.P. Lovecraft, The Shadow Out Of Time