I know it's been a while since I've posted, but I'll have a bunch of cool announcements within the next couple months. In the meantime though I can share this really cool bit of news that I've been keeping under wraps. I teamed up with HH Toy Company for their Mythos: Weird Fiction Minifigures line! We chose two of my designs turn into toys (both sculpted by Ryan Bukalew).

These are two recent monsters from authors that I've recently fallen in love with. The first creep is one of the Long White Creatures from Amos Tutuola's fever dream of a novel The Palm Wine Drinkard.  If you've spent any time on this blog or my IG you know I'm obsessed with Charles Saunders. This semando or mud monster is inspired by his story Jeroboam Henley's Debt that appeared in the collection The Book Of Cthulhu.
I'm really excited with the way these came out and I hope you guys like them. I also drew the headers and portraits of Tutuola & Saunders for them which I'll be posting later in the week. AND I wrote a little summary of why these authors are so important to me and why I think you should give them a try! 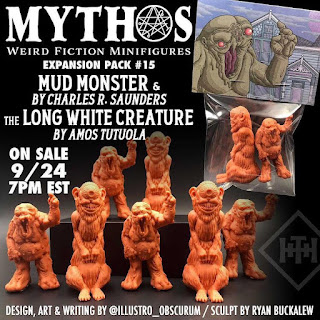 Head over to HH Toy Company this coming Friday to get your set!

Posted by Michael Bukowski at 11:00 AM No comments: