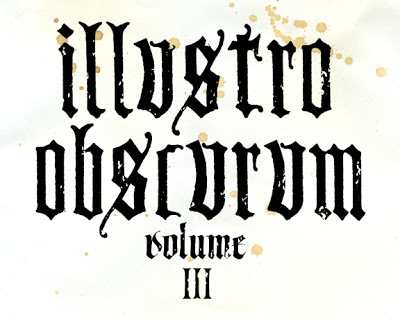 Preorders for the combo packs will be available Monday November 19th at 10:30am EST.
Posted by Michael Bukowski at 10:30 AM 2 comments: 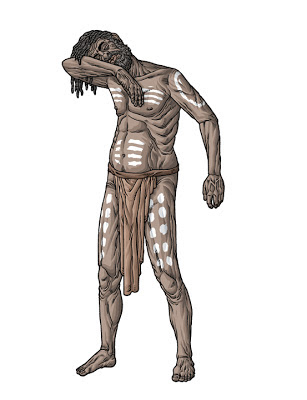 BUDDAI
"They connect them in some way with their common racial legends about Buddai, the gigantic old man who lies asleep for ages underground with his head on his arm, and who will some day awake and eat up the world."
H.P. Lovecraft, The Shadow Out Of Time

"They are known by many names by all the natives across the continent, and take a number of different forms. They are the giants of the dream time, races of giant hominids that roamed the continent even before the appearance of the first Aboriginal."
Rex Gilroy, Giants From the Dreamtime; The Yowie In the Myth and Reality


"Buddai, [is] a gigantic old man lying asleep for ages, with his head resting upon his arm, which is deep in the sand.  He is expected one day to awake and eat up the world."
Encyclopaedia Britannica, 1894* **

*Thanks to starblazie on the HPPodcraft forums for unearthing this.
**The original text uses terse, racist vernacular. Indigenous Australians have and continue to face horrible forms or racism in their homeland. To read more, visit Aboriginal Rights Coalition.

Email ThisBlogThis!Share to TwitterShare to FacebookShare to Pinterest
Labels: H.P. Lovecraft, The Shadow Out Of Time 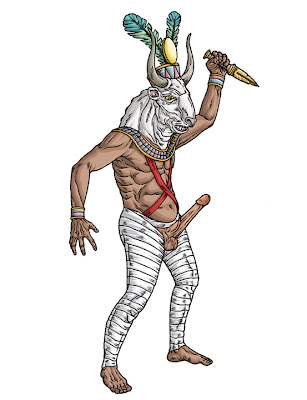 KHEM/MIN
Then we knew that we were done with Saracen Cairo, and that we must taste the deeper mysteries of primal Egypt—the black Khem of Re and Amen, Isis and Osiris."
H.P. Lovecraft & Harry Houdini, Under the Pyramids

"Min was represented as an ithyphallic bearded man. He wore the same headdress as Amon, two tall feathers, and held one arm raised to brandish a scourge or a thunderbolt. In the New Kingdom he was shown presiding over the harvest festival in the form of his sacred animal a white bull."
Veronica Ions, Egyptian Mythology

"An important male fertility god was Min, the local god of the ancient trading center of Gebtu, north of Thebes, where trails across the desert from the Red Sea met the Nile. Min is instantly recognizable on artifacts by his flail and his erect penis."
Charles Freeman, The Legacy Of Ancient Egypt

"As Khem or Min, he was the god of reproduction; as Khnum, he was the creator of all things, the maker of gods and men".
Florentine Bechtel, The Catholic Encyclopedia 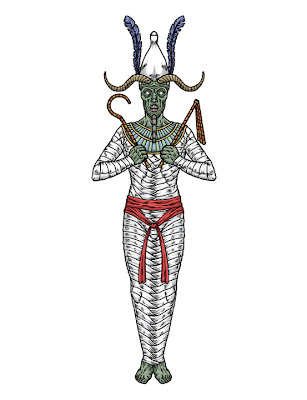 OSIRIS
"They conceived of a literal resurrection of the body which made them mummify it with desperate care, and preserve all the vital organs in canopic jars near the corpse; whilst besides the body they believed in two other elements, the soul, which after its weighing and approval by Osiris dwelt in the land of the blest, and the obscure and portentous ka or life-principle which wandered about the upper and lower worlds in a horrible way, demanding occasional access to the preserved body, consuming the food offerings brought by priests and pious relatives to the mortuary chapel, and sometimes—as men whispered—taking its body or the wooden double always buried beside it and stalking noxiously abroad on errands peculiarly repellent."
H.P. Lovecraft & Harry Houdini, Under the Pyramids

"Osiris was represented as a dead kin, with only the hands emerging from the mummy wrappings to grasp the emblems of his supreme power, the shepherd's crook and whip. His body was colored red for the earth or green for vegetation, and on his bearded head he wore the atef crown, composed of the white crown of Upper Egypt and the two feathers of Busiris, to which were sometimes added a pair of horns."
Veronica Ions, Egyptian Mythology 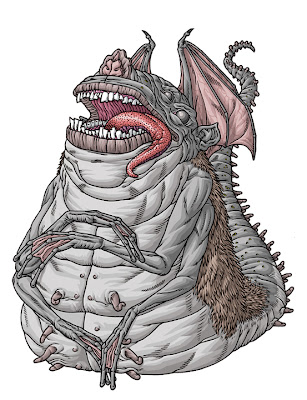 TSATHOGGUA
"Black Tsathoggua moulded itself from a toad-like gargoyle to a long, sinuous line with hundreds of rudimentary feet, and a lean, rubbery night-gaunt spread its wings as if to advance and smother the watcher."
H.P. Lovecraft & Hazel Heald, The Horror In the Museum

"He was very squat and pot-bellied, his head was more like a monstrous toad than a deity, and his whole body was covered with an imitation of short fur, giving somehow a vague sensation of both the bat and the sloth. His sleepy lids were half-lowered over his globular eyes; and the tip of a queer tongue issued from his fat mouth."
Clark Ashton Smith, The Tale Of Satampra Zeiros

"In that secret cave in the bowels of Voormithadreth . . . abides from eldermost eons the god Tsathoggua. You shall know Tsathoggua by his great girth and his batlike furriness and the look of a sleepy black toad which he has eternally. He will rise not from his place, even in the ravening of hunger, but will wait in divine slothfulness for the sacrifice."
Clark Ashton Smith, The Seven Geases 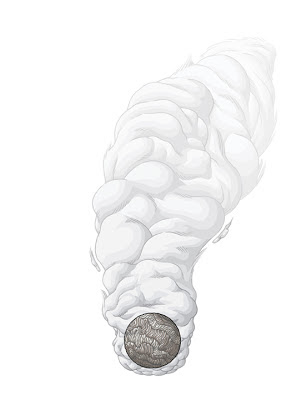 GOD OF YAKUB
"A strange structure rose in the middle of the rainbow-hued floor, tier on tier, each of a separate, vivid color. The ultimate tier was a purple cone, from the apex of which a blue smoky mist drifted upward to a sphere that poised in mid-air—a sphere that shone like translucent ivory."

"This, the deep-grooved memories of Tothe told Campbell, was the god of Yekub, though why the people of Yekub feared and worshipped it had been forgotten a million years. A worm-priest stood between him and the altar which no hand of flesh had ever touched."
H.P. Lovecraft, C.L. Moore, A. Merritt,
Robert E.Howard, & Frank Belknap Long, The Challenge From Beyond