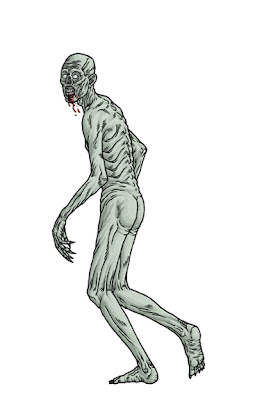 ROLANG
"192-Thibetan ROLANG—Sorcerer (or NGAGSPA) reanimates a corpse by holding it in a dark room—lying on it mouth to mouth and repeating a magic formula with all else banished from his mind. Corpse slowly comes to life and stands up. Tries to escape—leaps, bounds, and struggles—but sorcerer holds it. Continues with magic formula. Corpse sticks out tongue and sorcerer bites it off. Corpse then collapses. Tongue become a valuable magic talisman. If corpse escapes—hideous results and death to sorcerer."
H.P. Lovecraft, Commonplace Book

"Another mysterious rite is called rolang (the corpse who stands up)."

"The celebrant is shut up alone with a corpse in a dark room. To animate the body, he lies on it, mouth to mouth and while holding it in his arms, he must continually repeat mentally the same magic formula excluding all other thoughts.
After a certain time the corpse begins to move. It stands up and tries to escape; the sorcerer firmly clinging to it, prevents it from freeing itself. Now the body struggles more fiercely.It leaps and bounds to more extraordinary heights, dragging with it the man who must hold on, keeping his lips upon the mouth of the monster, and continue mentally repeating the magic words.
At last the tongue of the corpse protrudes from its mouth. The critical moment has arrived. The sorcerer seizes the tongue with his teeth and bites it off. The corpse at once collapses.
Failure in controlling the body after having awaked it, means certain death for the sorcerer."
Alexandra David Neel, Magic and Mystery In Tibet 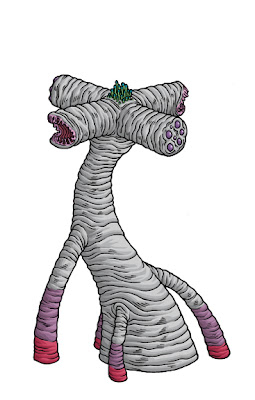 NON-TERRESTRIAL BEING
"187 Dream of awaking in vast hall of strange architecture, with sheet-covered forms on slabs—in positions similar to one’s own. Suggestions of disturbingly non-human outlines under sheets. One of the objects moves and throws off sheet—non-terrestrial being revealed. Sugg. that oneself is also such a being—mind has become transferred to body on other planet."
H.P. Lovecraft, Commonplace Book 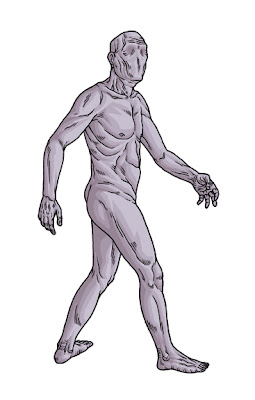 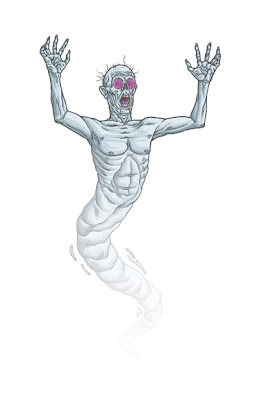 LEMUR
"In an instant every moving entity was electrified; and forming at once into a ceremonial procession, the nightmare horde slithered away in quest of the sound—goat, satyr, and aegipan, incubus, succuba, and lemur, twisted toad and shapeless elemental, dog-faced howler and silent strutter in darkness—all led by the abominable naked phosphorescent thing that had squatted on the carved golden throne, and that now strode insolently bearing in its arms the glassy-eyed corpse of the corpulent old man."
H.P. Lovecraft, The Horror At Red Hook

"Some writers describe lemurs as the common name for all spirits of the dead, and divide them into two classes, the Lares, or souls of good men, and Larvae, or souls of wicked men. But the common idea was that Lemures and Larvae were the same. They were said to wander about as specters and to torment and frighten the living."
Sir William Smith, Dictionary Of Greek and Roman Biography, Mythology, and Geology 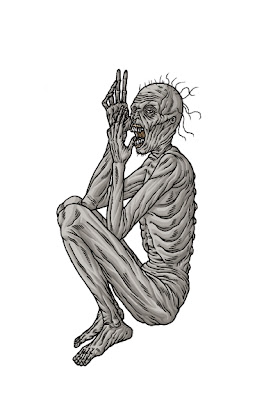 LIVING MUMMY
"The eyes were closed, with lids clamped down tightly over eyeballs apparently bulging and prominent. Bits of hair and beard remained, and the colour of the whole was a sort of dull neutral grey. In texture the thing was half leathery and half stony, forming an insoluble enigma to those experts who sought to ascertain how it was embalmed. In places bits of its substance were eaten away by time and decay."

"God help us!—its hellish bulging eyes had popped wide open, and seemed to be staring directly at the two intruders who had died of fright or worse."
H.P. Lovecraft & Hazel Heald, Out Of the Aeons

Email ThisBlogThis!Share to TwitterShare to FacebookShare to Pinterest
Labels: H.P. Lovecraft, Hazel Heald, Out Of the Aeons 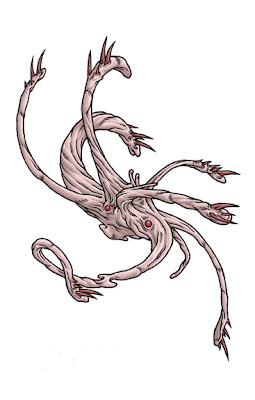 SITTER
"106-A thing that sat on a sleeper’s chest. Gone in morning, but something left behind."
H.P. Lovecraft, Commonplace Book

I know it's been a week since I last posted, but I just finished a huge, complicated shirt design for Adepticon's 10th anniversary. It's an insanely huge and amazing Warhammer convention that's held every year in Chicago. I've got a bunch more monsters finished and they will go up next Monday for at least 2 weeks uninterrupted. In the meantime check out the piece I did for Adepticon and you can also check out my tumblr. It seems like a more appropriate place to post stuff interests and inspires me (like my top ten list that I posted and then took down immediately...sorry guys). I'll also be posting some non HPL themed work there, so check it out. 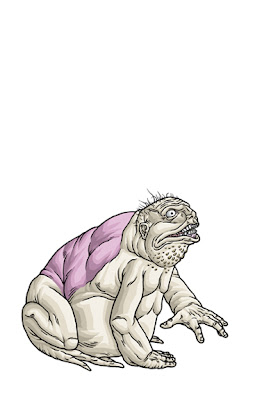 SLIMY ENORMOUS FROG
"As I fled from that accursed castle along the bog’s edge I heard a new sound; common, yet unlike any I had heard before at Kilderry. The stagnant waters, lately quite devoid of animal life, now teemed with a horde of slimy enormous frogs which piped shrilly and incessantly in tones strangely out of keeping with their size. They glistened bloated and green in the moonbeams, and seemed to gaze up at the fount of light. I followed the gaze of one very fat and ugly frog, and saw the second of the things which drove my senses away."
H.P. Lovecraft, The Moon-Bog

Email ThisBlogThis!Share to TwitterShare to FacebookShare to Pinterest
Labels: H.P. Lovecraft, The Moon-Bog 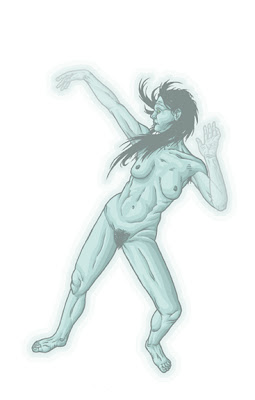 NAIAD
"The wide plain, the golden moonlight, the shadowy moving forms, and above all the shrill monotonous piping, produced an effect which almost paralysed me; yet I noted amidst my fear that half of these tireless, mechanical dancers were the labourers whom I had thought asleep, whilst the other half were strange airy beings in white, half indeterminate in nature, but suggesting pale wistful naiads from the haunted fountains of the bog."

"Half gliding, half floating in the air, the white-clad bog-wraiths were slowly retreating toward the still waters and the island ruin in fantastic formations suggesting some ancient and solemn ceremonial dance. Their waving translucent arms, guided by the detestable piping of those unseen flutes, beckoned in uncanny rhythm to a throng of lurching labourers who followed dog-like with blind, brainless, floundering steps as if dragged by a clumsy but resistless daemon-will."

"Then silently and gracefully the naiads reached the water and melted one by one into the ancient bog; while the line of followers, never checking their speed, splashed awkwardly after them and vanished amidst a tiny vortex of unwholesome bubbles which I could barely see in the scarlet light."
H.P. Lovecraft, The Moon-Bog

"This is the collective name of a group of water nymphs in the classical mythology of Greece and Rome. The Naiades presided over lakes, rivers, streams, and sometimes fountains. They are portrayed as beautiful maidens with a crown of rushes in their hair, leaning against an urn from which fresh water is flowing."
Carol Rose, Spirits, Fairies, Leprechauns, and Goblins

Email ThisBlogThis!Share to TwitterShare to FacebookShare to Pinterest
Labels: H.P. Lovecraft, The Moon-Bog 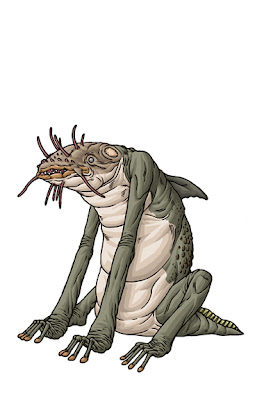