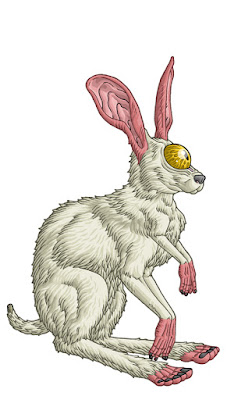 MURNOO
"It is the embryo of a Murnoo often called a 'sex-animal.' The Murnoo is a very important part of the Ziello race, but it isn't a Ziello."
"The Murnoo grows very fast, and as soon as it releases the teat in the male's pouch it is born--a tiny furry helpless creature who requires care at first, but grows very fast."
"In only about three years it is full grown, but it doesn't look much like its Ziello father and mother. It's much shorter, with a rounded face and ears, rudimentary upper arms, and a short tail."
"Well, as a sex-animal it turned out a strange cream shade, quite lovely, with red ears and paws."
"They look partly like Ziellos and partly like big rabbits."
James Tiptree Jr., Collision 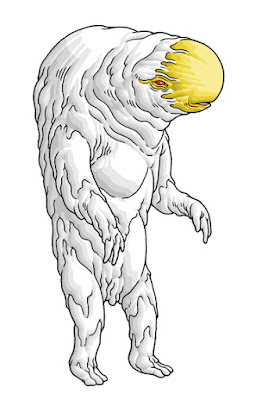 HRATTLI
"We know it doesn't mean anything -- you have Hrattli in top Gal Fed jobs and they look like poached eggs."
James Tiptree Jr., Your Haploid Heart
Posted by Michael Bukowski at 10:00 AM No comments: 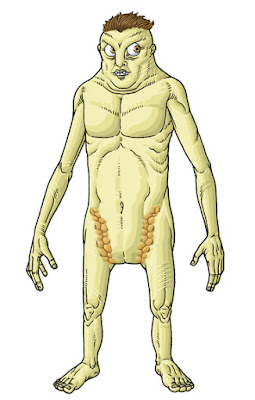 ESTHAAN
"Very human, is my snap reaction. He has the same number of fingers and features, his joints work like ours, and his skin texture -- a feature on which i place great hunch reliance -- is a cream-yellow version of my own brown. Eyes round, with laugh lines, and his smile shows human teeth with an extra pair of frontals. All quite standard except that his torso looks a trifle thick or blocky."
"'These owl-eyed marshmallows'"
"I rip the pilots clothes, exposing his swollen body. Two great angry scars run from each pubic ligament to above the crest of the pelvis."
"A supreme convulsion sweeps the Esthaan and the two gashes in his flanks swell, pulse, and slowly evert themselves like giant pea pods turning inside out. Amass of wriggling blobs of flesh tumbles down his sides. He screams."
James Tiptree Jr., Your Haploid Heart
Posted by Michael Bukowski at 10:00 AM No comments: 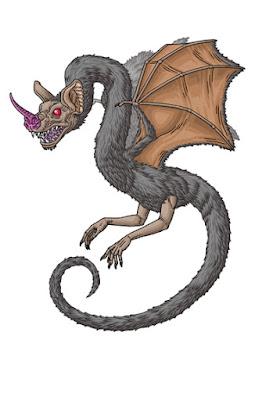 MPIRI
"With bodies rivaling those of lions in size, and wingspans that exceeded the width of an elephant's ears, only kyame of the most potent quality could have muted the sounds the creatures' approach would otherwise have made. The intruders' nightmare aspect was like that of an unspeakable amalgamation of serpent and bat. Long, coarse black hair covered their wings and bodies, leaving only their hind-limbs bare. The appendages at the end of those muscular limbs bore a repellant resemblance to human hands."
"Long, blunt-ended jaws opened wide to reveal sharp, spiky teeth. The eyes above those fearsome jaws glittered with cold intelligence - and hatred."
Charles R. Saunders, Dossouye II: The Dancers Of Mulukau
Posted by Michael Bukowski at 10:00 AM 1 comment: 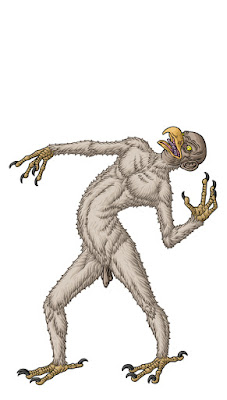 OMULUDU
"The being that now stood before Imaro bore the semblance of an emaciated ape, with sinewy arms and legs that were longer and straighter than those of a gorilla or chimpanzee. Its torso was thin but muscular, like the body of a snake. hair the color of river-mud covered all of the creature's body except its face, which was only vaguely anthropoidal."

"Instead of a nose and a mouth, a hooked beak like that of an eagle jutted form the middle of the creature's face. In place of hands and feet, its limbs ended in curving talons resembling those of a gigantic bird of prey. Unlike those of beast or bird, however, the being's slit-pupilled eyes blazed with malevolent intelligence."
Charles R. Saunders, 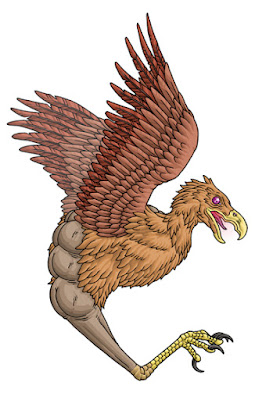 CHEMOSIT
"The chemosit is described as part human and part bird. It has one leg and nine buttocks. Its red mouth shines like a lamp at night. Whatever else it may be, the chemosit is unquestionably a new being in distinct visual form."
Charles R. Saunders, Out Of Africa

Email ThisBlogThis!Share to TwitterShare to FacebookShare to Pinterest
Labels: Charles R. Saunders, chemosit, Out Of Africa 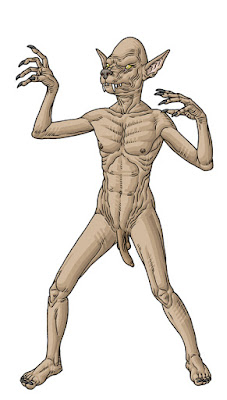 SICHI
"His body was tall and gaunt, but beneath his earth-colored skin swelled ropy thews that bespoke of a strength that was more than human. His hairless skull sloped to a peak, and his ears were pointed like those of a jackal. His jaws protruded in a beast-like muzzle. Within those jaws a carnivore's teeth gleamed as Umanya Kwi smiled."

"'Do your legends not tell you how many of your kind were needed to bring down one of mine? I am a sichi, yes! I am worth ten of you! Pray to your ancestors, ahosi, for your armor will adorn these trees before this night ends!'"
Charles R. Saunders, Dossouye I 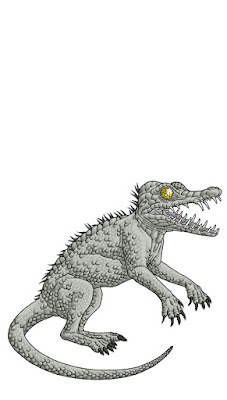 INGULUKU
"If a lion could have been mated with a crocodile, the offspring might have resembled the inguluku. Spiky teeth lined its long jaws. Eyes set in deep sockets glared in a sloping, reptilian skull."


"Legs that were slightly bowed held a sinuously muscular body high from the ground. All four of the inguluku's paws were equipped with hook-like talons. Its body was cat-like, but its tail was a long, tapering cone of sinew, like that of a lizard. Dull, green scales covered the beast's body. Spiky black hair grew in tufts across its head and along its spine." 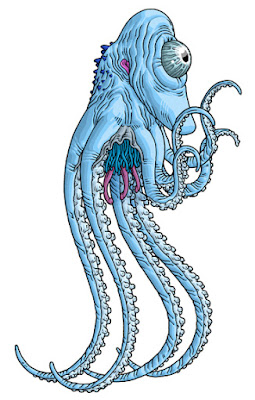 ANGLI
"The color of course you know––sky-blue in the main, with here and there blues lighter or darker from slate to peacock blue, from pale blue foam to deep marine. And the great eyes were quite Human-shaped, though the size of foot-lockers. And the tentacles you have met––each had groups of suckers-discs which were apparently quiescent unless the owner wished to cling."

"To put it bluntly, the aliens looked like gigantic cerulean octopuses."

"Their heads were large and bald and shiny above the single eye, and their mantles began where a chin should be, concealing their noses and mouths, or beaks, or whatever. Also to be glimpsed beneath the mantle's rippling edges was a mass of darker blue fur-like organs among which seemed to be some very small, delicate tentacles of unknown use."

"And their basically radial bodies were obviously in transition to a bilaterally symmetrical form––the four 'back' leg-tentacles were much larger and longer, to free the front four. In face if––as happened later––a small one wore a long robe with a good to conceal the shiny bald dome above the eye, it could pass for a large, somewhat top-heavy human form."
James Tiptree Jr., Second Going 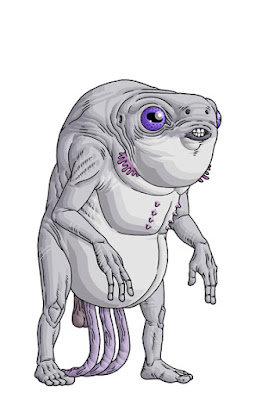 PARADISIAN
"Gray rotten little things were humping toward them out of the walls, stopping to stare."

"Three of the lumps were humping closer. All dove-gray like himself, but it was hide, not silk, that bloated at elbows and knees. Gray splayed feet, and between them, under bags of belly, the giant genitals of two of them leaving triple furrows in the mud."