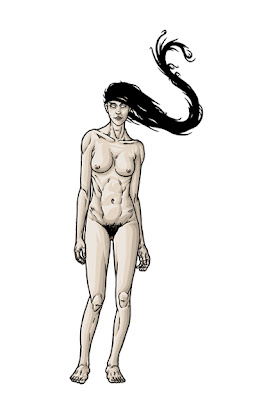 GORGON
"He knew what it was—what that woman—that leopardess, or gorgon, or lamia, or whatever she was—actually represented."

“‘I found her in front of the mirror braiding that accursed hair. She turned on me like a wild beast, and began spitting out her hatred of Marsh. The fact that she’d been in love with him—and I knew she had—only made it worse. For a minute I couldn’t move, and she came within an ace of completely hypnotising me. Then I thought of the picture, and the spell broke. She saw the breaking in my eyes, and must have noticed the machete, too. I never saw anything give such a wild jungle beast look as she did then. She sprang for me with claws out like a leopard’s, but I was too quick. I swung the machete, and it was all over.’
“Denis had to stop again there, and I saw the perspiration running down his forehead through the spattered blood. But in a moment he hoarsely resumed.
“‘I said it was all over—but God! some of it had only just begun! I felt I had fought the legions of Satan, and put my foot on the back of the thing I had annihilated. Then I saw that blasphemous braid of coarse black hair begin to twist and squirm of itself.
"Then, I got a worse fright—for in another second the braid had turned on me and began to strike venomously with one of its ends which had knotted itself up like a sort of grotesque head. I struck out with the machete, and it turned away. Then, when I had my breath again, I saw that the monstrous thing was crawling along the floor by itself like a great black snake."
H.P. Lovecraft & Zealia Bishop, Medusa's Coil 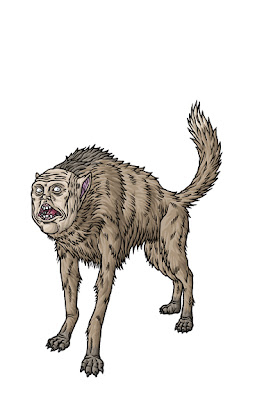 FOUR-PAWED THING
"Stopping a while to watch the fading day,
I heard faint howls, as from a room upstairs,
When through the ivied panes one sunset ray
Struck in, and caught the howler unawares.
I glimpsed—and ran in frenzy from the place,
And from a four-pawed thing with human face."
H.P. Lovecraft, The Fungi From Yuggoth 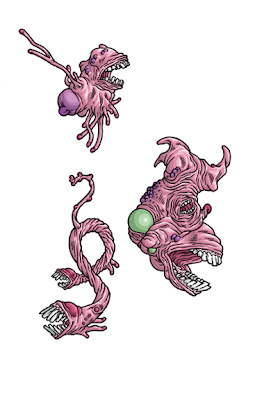 
"Foremost among the living objects were inky, jellyish monstrosities which flabbily quivered in harmony with the vibrations from the machine. They were present in loathsome profusion, and I saw to my horror that they overlapped; that they were semi-fluid and capable of passing through one another and through what we know as solids."


H.P. Lovecraft, From Beyond

Email ThisBlogThis!Share to TwitterShare to FacebookShare to Pinterest
Labels: From Beyond, H.P. Lovecraft 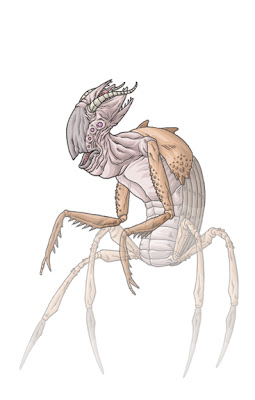 INVISIBLE MONSTER
"He is said by Ebn Khallikan (12th cent. biographer) to have been seized by an invisible monster in broad daylight and devoured horribly before a large number of fright-frozen witnesses."H.P. Lovecraft, The History Of the Necronomicon

Email ThisBlogThis!Share to TwitterShare to FacebookShare to Pinterest
Labels: H.P. Lovecraft, The History Of the Necronomicon 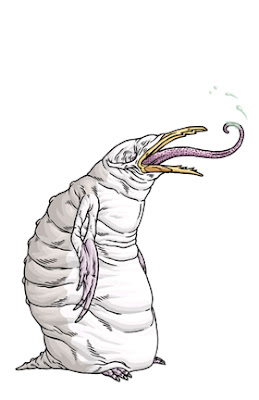 MUTANT PENGUIN
"For it was only a penguin - albeit of a huge, unknown species larger than the greatest of the known king penguins, and monstrous in its combined albinism and virtual eyelessness."

"Their size reminded us of some of the archaic penguins depicted in the Old Ones’ sculptures, and it did not take us long to conclude that they were descended from the same stock-undoubtedly surviving through a retreat to some warmer inner region whose perpetual blackness had destroyed their pigmentation and atrophied their eyes to mere useless slits."
H.P. Lovecraft, At the Mountains Of Madness

Email ThisBlogThis!Share to TwitterShare to FacebookShare to Pinterest
Labels: At the Mountains Of Madness, H.P. Lovecraft 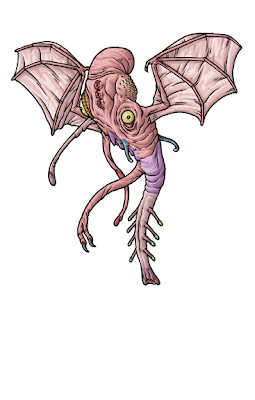 SHAPELESS BAT-THING
Here the vast Lord of All in darkness muttered
Things he had dreamed but could not understand,
While near him shapeless bat-things flopped and fluttered
In idiot vortices that ray-streams fanned.H.P. Lovecraft, The Fungi From Yuggoth 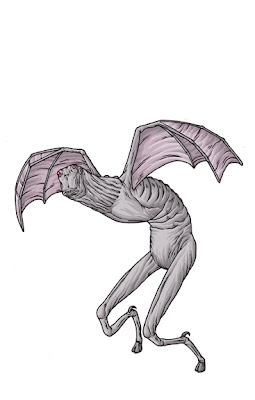 CROUCHING THING
When he began those night-howls we declared
He’d better be locked up away from harm,
So three men from the Aylesbury town farm
Went for him—but came back alone and scared.
They’d found him talking to two crouching things
That at their step flew off on great black wings.
H.P. Lovecraft, The Fungi From Yuggoth 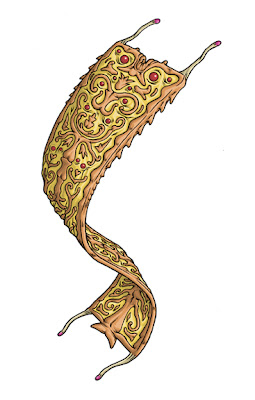 LIVING ARABESQUE
"All the objects—organic and inorganic alike—were totally beyond description or even comprehension. Gilman sometimes compared the inorganic masses to prisms, labyrinths, clusters of cubes and planes, and Cyclopean buildings; and the organic things struck him variously as groups of bubbles, octopi, centipedes, living Hindoo idols, and intricate Arabesques roused into a kind of ophidian animation."
H.P. Lovecraft, Dreams In the Witch-House 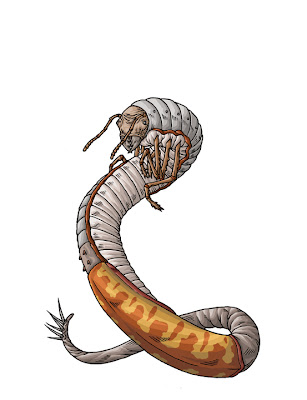 SARALL
"Thus shielded, Yalden fared without incident until he came to the place of the White Worm. Here of necessity he delayed to make preparations for finding the rest of his way. With patient diligence he captured the small colorless maggot, and surrounded it with a curious mark made with green paint. As was prophesied, the Lord of Worms, whose name was Sarall, made promise of certain things in return for its freedom. Then Yalden released it, and it crawled away after directing him on the course he was to follow."
H.P. Lovecraft & R.H. Barlow, The Hoard Of the Wizard-Beast