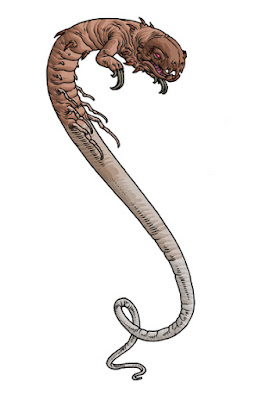 PARASITE OF DISBELIEF
"There was a tank with a couple of turtles near the window, beside it another, full of newts, and in one corner a large cage of well-tended, brisk white mice. Glass cases, with carefully mounted series of lepidoptera and hymen-optera, showing the metamorphic stages hung on the walls, and on a drawing board there was a daintily executed study of Branchippus, the 'fairy shrimp'."

"It was claimed that Hallowell had, well, divested himself of something, and passed it on to the other boy, with the statement that the latter would only be able to get rid of his cargo when he in turn found a boy who would disbelieve him."


"I stumbled backwards, sending the tank of newts crashing to the floor. Supporting him with my arms, I hung on to him while he heaved, face downwards. At the same time I felt a tickling, sliding sensation in my own ear, and an inordinate desire to follow it with my finger, but both my hands were busy. It wasn't a minute 'till I'd gotten him onto the couch, where he drooped, a little white about the mouth, but with that chastened, purified look of the physically relieved, although he hadn't actually upchucked."

"Between them on the desk, as if one of its mahogany shadows had become animate, something seemed to move—small, seal-colored, and ambiguous."
Hortense Calisher, Heartburn
Read Scott's blog post about this story here.

Email ThisBlogThis!Share to TwitterShare to FacebookShare to Pinterest
Labels: Heartburn, Hortense Calisher, Parasite Of Disbelief, Stories From the Borderland 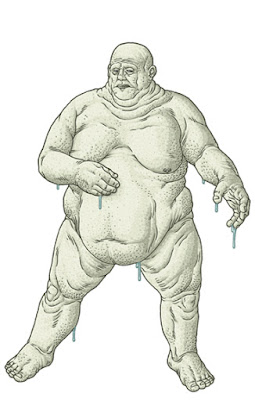 THE DAMP MAN
"I don't know how to describe him exactly except that he's very big and fat and he always has on a dark suit like a chauffeur's suit but it isn't really. And his face is lumpy and kind of swollen. And his eyes scare me too. "

Pelgrim had a glimpse of a fleshy dead-white face, and then an evening paper ascended in front of the waistcoat and head like a protective barrier."

"The eyes were one color black. They had no depth, no expression. The were simply round disks like the button gimlets of a cod exhibited in the window of a fish store. He looked…he looked like someone George remembered years ago, a bloated body grappling irons had pulled out of the river one cold night onto a police launch deck."

"His fists pounded into the spongy monstrous hulk, and then a heavy fat hand smacked into the side of his neck making his senses reel."

"The strange abnormal wetness of those beefy hamlike hands."

"You've water in you, not blood,' the reporter screamed involuntarily. 'You're not human…'"
Allison V. Harding, The Damp Man

"Lother Remsdorf's veins, for instance were not filled with blood but with some sub-hemolytic fluid not far removed form the substances of jelly fish."

"The average human, scientists know, is made up two-thirds of water. The Damp Man was ninety-five per cent water. His organic functions, as they revealed their secrets one by one to the tests that were applied, were sluggish, slow-functioning machines beyond any conceivable range of normalcy or abnormalcy."

"This preposterous creature before him, this absurd, macabre, wholly terrifying blob of protoplasmic monstrousness! He watched fascinatedly as a drop of water fell form a pudgy forefinger."

"Because you arranged for my death! AH! but you, my son are not dead and that is something which must be righted. I created you out of the brine, out of the molecule, and out of the protoplasm. And where other men return to dust, you will return to your medium!"
Allison V. Harding, The Damp Man Returns

"His vital organs, despite the immense size of him, were compressed and hidden away within the fluid-fat monstrousness of the creature."
Allison V. Harding, The Damp Man Again
Read Scott's blog post about this story here. 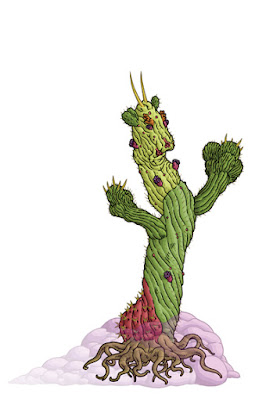 Posted by Michael Bukowski at 10:30 AM 2 comments: