THE INSATIABLE ONE II (NYARLATHOTEP) 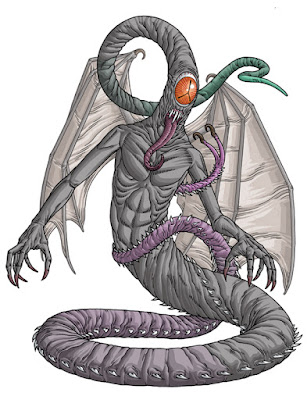 THE INSATIABLE ONE II (NYARLATHOTEP)
"They gaped at it. That was all they could do: stare past the horrible bacchanal of dismemberment to the statue itself, as it began to move."

"The blood that had trickled down the front of the idol boiled and steamed, and the head that had been placed atop the neck began to swell. The sockets widened until the nasion popped, revealing a single eye, monstrous and three-lobed. The mouth melted and drooped, sabre-like fangs sprouting from the gums while a livid tongue unrolled down to the statue's chest."

"With a clang, the idol cracked down the middle and each half fell to the side. What was coiled beneath was far too large to have been housed in the shell from which it erupted."

"As the forked tail uncoiled, the head elongated and tapered to match that lower appendage. Membranous wings spread out from its back as its arms stretched forth. A spray of acidic slime spattered the cavorters as they writhed in ecstasy or pain, it was impossible to tell which. What was left where the statue had once stood now resembled an enormous winged worm, with a face and arms."

"Wilenski could not look away from it. He stared into its great eye, and as he did so he felt as if something was being planted in the base of his skull. Then he felt it twitch."
Michael Bukowski & Jason McKittrick, The Bronze God Awakens
Edited by Orrin Grey

Email ThisBlogThis!Share to TwitterShare to FacebookShare to Pinterest
Labels: Collaboration, Jason McKittrick, Nyarlathotep, The Insatiable One

THE INSATIABLE ONE I (NYARLATHOTEP) 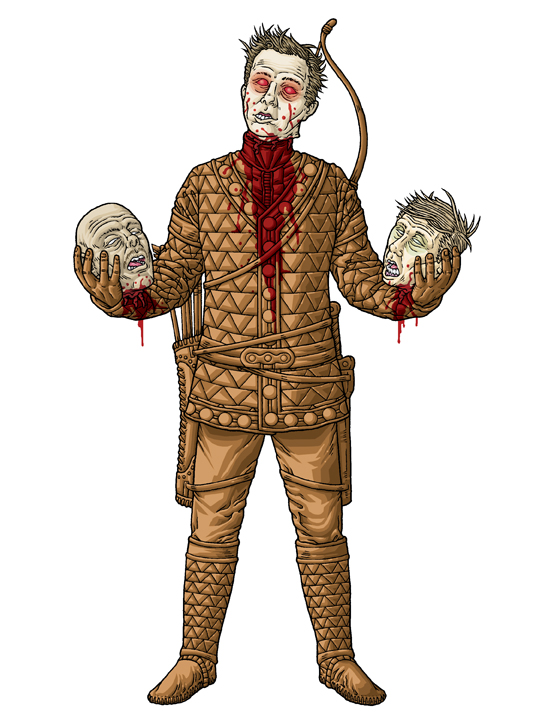 THE INSATIABLE ONE I (NYARLATHOTEP)
"McConnel and Wilenski peered over the ledge as a pandemoniac scene unfolded before them. A dozen men and women cavorted naked around a fire before a six foot high bronze statue on an equally tall stone base. The statue depicted a man with his arms out, palms up, as if in waiting. The sculptors had taken great care in depicting the statue's Scythian attire, even carving the intricate patterns of the tunic and boots in relief. A bow hung over its shoulder and a quiver at its side. The statue's features were perfect, except in one detail; where there should have been a head, there was none."

"The men and women seemed out of place, and not merely because they were trespassing on an active excavation site. Their features were Caucasian, their skin so white it had a bluish translucent hue."

"In the flickering light of the pyre the two archaeologists were able to make out the grotesque features of the worshipers in their revelry. What they had originally taken to be sensational rumors were proved true; the cultists had tried to emulate their headless god as best they could. To varying degrees they had removed parts of their heads. For some it was as simple as a shaved head, while others had taken off ears and noses. A select few had removed teeth."

"Two of the figures approached the statue, each of them pulling a severed human head from a worn and bloody sack. As one, they placed their grisly prizes in each of the statue's upturned hands. When they had finished, a woman whose face was covered with a long and gauzy scarf--the only piece of clothing among the throng--approached the back of the statue. As she climbed the pedestal, she removed the covering from her face. Her head was shaved, her ears and nose gone, and so were her eyes. This, however, was not the worst part. She had somehow removed her own lower jaw. A raw hole pulsed open and closed where not even a tongue dangled. She crawled up the back of the statue, moving unerringly in spite of her blindness, and placed a third severed head atop the statue's neck."

"Wilenski stifled a wretch and turned his head, but try as he might, McConnel could not look away. And so he saw the head atop the statue's neck open its gleaming eyes,
and look back at him."
Michael Bukowski & Jason McKittrick, The Bronze God Awakens
Edited by Orrin Grey

THE HARBINGER OF THE ABYSSAL MAW (NYARLATHOTEP) 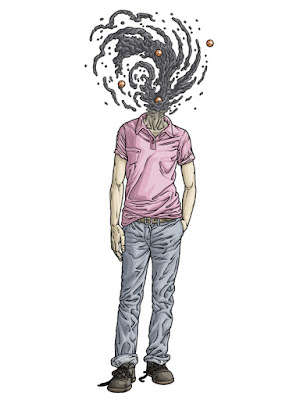 THE HARBINGER OF THE ABYSSAL MAW (NYARLATHOTEP)
"You've had about enough. It’s all so tiresome — the late nights at work, the growing silences between you, the old passions grown cold. Even more than the loneliness all of that engenders, what bothers you is the dull predictability of the whole sorry mess. He’s made you into a cliche, and that’s something you can’t abide."

" He’s sitting there eating his goddamned breakfast without a single word to you, without a grunt of acknowledgement, and you’re scrubbing the pan you used to fry his eggs, watching the dirty water spiral its way into the drain. He’s masticating his food with his mouth open like a feral child. It’s the little things that break you in the end. "

“'This isn’t going to work anymore,' you say. You feel the rampant power of the statement, and the fear it drags behind.

“'This whole thing. Us.' You can’t bear to look at him while you say it. Easier to watch the spiraling water, the black hole that sucks it all in.

"He stops gobbling his food. 'I don’t understand.'”

“'I don’t know you anymore. I look at you and it’s like someone else staring back at me. All we ever do anymore is talk past each other. What happened to the man I married?'”

"You turn around. He has no head. In its place is a dark, swirling gyre, a buckling-inward of space. It is like looking into a black hole, you think, or down the throat of the Beast. Parts of your mind dislodge and float into it: your ability to apprehend color; your memory of your father. Something — a cold antagonism, a radiant evil — regards you from within the turning chaos."

“'I slipped into his eye ate his brain from the inside out. Now I wear him like a suit. He’s a little snug, but I’m nothing if not adaptable. I am the harbinger of the waking of the abyssal maw. I’ve built a mound of blood-greased bones in the basement and in a week’s time I will light it afire, using the marrow of your own children and the rendered flesh of the Collinses down the block. This will act as one of the Black Lanterns which will summon Azathoth, the eater of worlds. There are many others. I’m surprised you haven’t smelled it! It’s pretty rank.'”

"You can only shake your head."

"You find a way around your dismay, enough to use your voice again. 'Oh my God. Did you even hear me? I’m telling you I want a divorce.'”

"He sighs, and sits back down. You turn away from him. He starts slurping up his food again. It feels as though nothing has changed. You turn off the water, dry the pan, and get on with your day. "
Nathan Ballingrud, What We Talk About When We Talk About Nyarlathotep
Written Exclusively For an Illustro Obscurum Collaboration 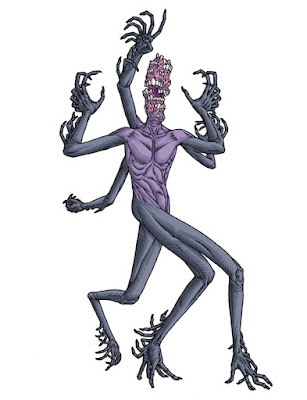 THE CROOKED SPECTRE (NYARLATHOTEP)
"I hesitantly descend the staircase, my eyes never leaving the door of the house. The noise beyond is so faint I can hardly be sure it’s there, and the windows that flank the door show only the hint of shadows moving across them in the night. I have Stella’s strongly-worded assurance she is coming, but her attempt at relieving my anxiety only sparks a thousand thoughts in my mind. Is that her now, safe and sound, on my stoop? Is she lying there injured, trying desperately to gather my attention before something more tragic befalls her? Or is it something else entirely? Something worse than my
sleep-addled mind can imagine?"

"The drawing in the book is crude, yet it clearly etches out a shape amid the dark scribbles and scrawl. A body of twisting lines intersecting, ganglinous and knotted; an eyeless face full of row upon row of teeth. Multitudinous digits protruding from backward-bending arms. The drawing is of pure nightmare, and yet I sense attitude in the line, as though the artist is not fearful of the beast but envious, or perhaps enamored. It exceeds reason that such a thing should be real, let alone stalking me for something so simple as disturbing a pile of stones and taking the old black book on which they sat; yet Lunen is dead and gone and Marguite no longer has eyes with which to see or a mouth which can speak of what has happened. One by one my friends have been taken; taken by that crooked spectre in its relentless pursuit of me."

"Stella is all that remains of my life; my poor, disbelieving, intractable Stella. If it is not her there on my stoop, if she has yet to arrive, it will only be a matter of time. Do I dare open the door to greet her? Or should I let her face alone what is intended for me, allowing me to prolong my life that much longer?"

"My hand is on the doorknob for an eternity as I wonder what I will do."
Simon Strantzas, The Crooked Spectre
Written Exclusively For an Illustro Obscurum Collaboration 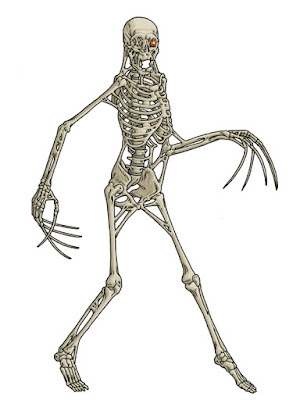 THE BONE MASON (NYARLATHOTEP)
"He’s a walking bone; smooth and yellow, his teeth all one and sharp, like the edge of a chisel."

"You’d think he’d walk stiff but he moves smooth as a ball joint."

"When he leaves you he takes the tiniest bones with him, the ones he says you won’t need (the stapes, the incus and the malleus). Even so, you call after him, 'Thank You,' because you love him and want him to return. He turns and says something, his face full of love and affection, but you cannot hear his response."
Kaaron Warren, The Bone Mason
Written Exclusively For an Illustro Obscurum Collaboration