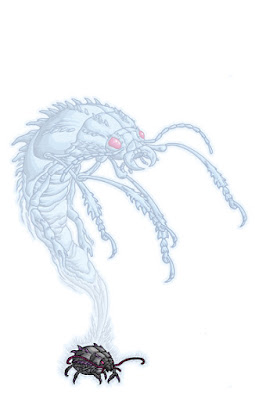 SYMBIOTIC PSYCHIC BEETLE
"I clambered up quickly, to see the largest black beetle I had ever experienced staring placidly down at me from its perch inside the cherub's mouth."

"It was an awesome specimen, big as a field mouse, with a brace of bristling antennae which it waved menacingly at me. "

"'The bug is simply a large black beetle and nothing more!'"

"'You'd better shut up and leave me alone! All I have to do is tell him and h'ell tear your head off.'"

"'Don't bother with that. you won't see him. You can't even touch him. But he can get you.'  Edward chuckled."

"I did not hear Edward's report, for I, too had heard the sleigher, sliding thump down the staircase as if some giant six-legged bull were descending.

"Whatever it was that Edward's mind had summoned to work his vengeance had disappeared the moment this brain had ceased to function."

"Quickly, I shone my light through the black hole of its neck, where I saw two stubby antennae, bristling and waving furiously at me. The bug was curled back into the recess of the head as far from me as possible."

"Quickly, I recovered my blow and began beating the black beetle madly."
Linda Thornton, The Inhabitant Of the Pond
Read Scott's blog post about this story here.