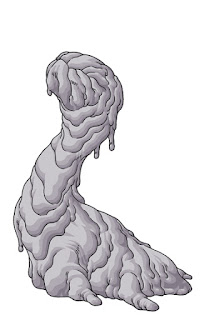 
"The light-robed dweller in the red barrens sat there, and the great black blob of shapeless jelly heaved gently on the crystal floor."
C.L.Moore, Jirel Meets Magic 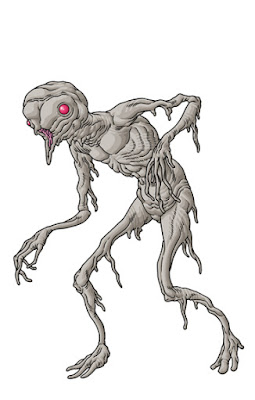 DWARFISH THING
"In a few moments the dwarfish shape had stumbled to Angela. In the darkness Barbara might have mistaken it for a child, except that its unstable head was disproportionately small, its skin appeared to be flapping."

"She handed the object to the dwarfish thing, which floundered away at once, toward the marshes."
Ramsey Campbell, The Nameless 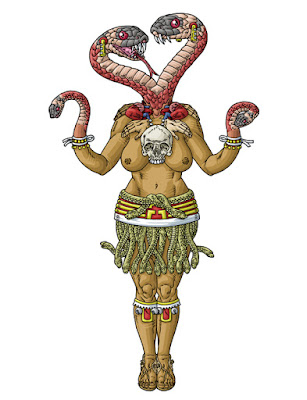 COATLICUE
"Depictions of Coatlicue are fairly rare in Aztec art. The most famous representation, and one of the most powerful Aztec sculptures, is the colossal figure discovered in 1790 alongside the cathedral of Mexico. Coatlicue wears a dress of woven rattlesnakes. Her pendulous breasts are partially obscured behind a grisly necklace of severed hearts and hands. Writhing coral snakes appear in place of her head and hands, denoting gouts of blood gushing from her severed throat and wrists. The two great snakes emerging from her neck face one another, creating a face of living blood."
Mary Miller & Karl Taube, The Gods and Symbols Of Ancient Mexico and the Maya

Email ThisBlogThis!Share to TwitterShare to FacebookShare to Pinterest
Labels: Coatlicue 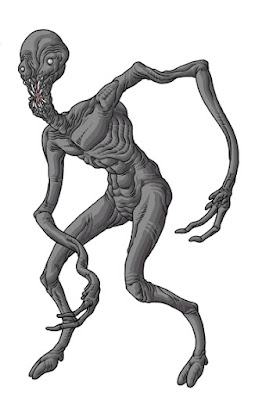 SHADE
"An empty black face save for pale grey pinhole eyes, staring up at her, meeting her wide-eyed gaze with utter impunity. A  smudged charcoal sketch of something vaguely humanoid, limbs long and spider-thin. It sat there for a moment, boneless in the seat beside her; it blinked languidly, lids like shutters sliding over those hard grey eyes."


"It lurked there a moment, barely visible but there, and when it finally came into the light - tentative, as if it might burn - she knew what it was. An oil-smear of a creature; the awful distortion of something almost human, crawling slowly on four long matchstick limbs. A narrow, elongated head bobbed limp on a thin neck. Pale eyes flickered open like newly-lit flames."

"The skin of it peeled back, the space below the eyes opening like a shutter to reveal  a gleaming lamprey mouth: a perfect circle of bright, needle-sharp teeth."

"The only solid facts I know is that the Shades are actually real, that I started seeing them after the bomb, and that they've been following me about ever since."
Laura Mauro, Naming the Bones 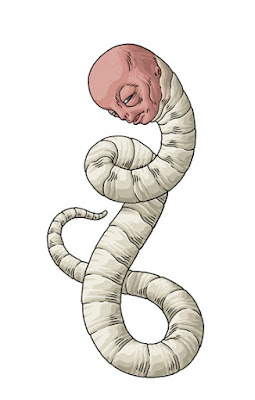 OOZING FEASTER
"Sonny thrashed against the floorboards and continued to ejaculate. In the near darkness, she became confused by what she saw--the short quick spurts that arced across his body were neither ropes nor strands, but thick and segmented. She'd seen a dead bird in the garbage and what had feasted upon it in oozing carpets, and her mental equilibrium wobbled mightily. "
Laird Barron, Catch Hell 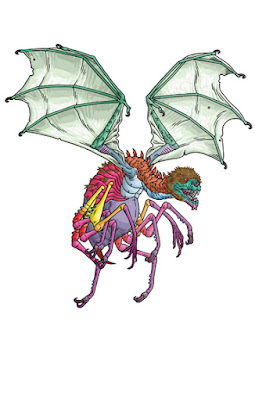 RONDACHE FAMILIAR
"And Leonardo was always interested in monsters. He shut himself away and studied all kinds of unpleasant little things - lizards, spiders, bats - and borrowed from all, blending and flavoring them with his own genius."

"If Leonardo da Vinci, a curly-blond boy in his teens, had studied lizards, bats and spiders for this, he had not hodge-podged his studies. Anyone else would have been content with a lizard's body, a spider's knuckly jointed legs, a bat's wings. Not so Leonardo, master of his eye and hand and brush even before his voice had changed and the first peachy fuzz had sprouted for the the beginning of that apostolic beard he was to wear."

"The legs - there seemed to be a great many of them - were hairy and jointed, but those in front, at least, bore hand-like extremities, reminiscent of the forefeet of lizards. Those wings were true da Vinci work; Norbier remembered the tales of how da Vinci, seeking to invent the airplane centuries before Langley or Wright, studied painstakingly ever flying creature, bat, bird and insect. As for the thing's head, that was apparently meant to seem a squat, dark-furred blotch, with two glowing close-set eyes peering from the thick fur as from an ambush. A real face to it, flattened like a bat's and a mouth with a jaw of ophidian shallowness, but a little open to show... yes, fangs. No wonder that everyone who saw the thing, from Piero da Vinci to the present, squared his shoulders a trifle to dissemble a shiver."

"It seemed to crouch there, then to hoist itself erect on the tips of its multiple claws. Among the curved, jointed brackets of its hind legs hung a puffy body, like a great crammed satchel. The integument had pattern, like scales, and from the spaces between the scales sprouted tufts and fringes of dark fur, like plush grown wild. And it had wings, also scaly and tufted, ribbed like a bat's that winnowed and stirred above its bulk. The head, a shaggy ball, craned in his direction. Deep within the thicket of fur upon the face clung two wise, close-set eyes, that glowed greenly, then redly, at him. Between and above them the fur seemed to part in two directions, as if the undeveloped forehead frowned.  A mouth opened, the light caught a stockade of white, irregular, pointed fangs. A great gout of foam came out, and fell splashing on the floor."

"The two foremost limbs rose, and at the ends Norbier saw hand-like claws, like the front feet of a big, big lizard."
Manly Wade Wellman, The Leonardo Rondache

Posted by Michael Bukowski at 9:57 AM No comments: 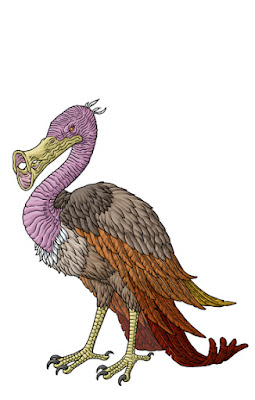 TOLLER
"'It's the hugest flying thing there is, I guess,' said Miss Tully. 'Its voice tolls like a bell, to tell other creatures their feed's near.'" 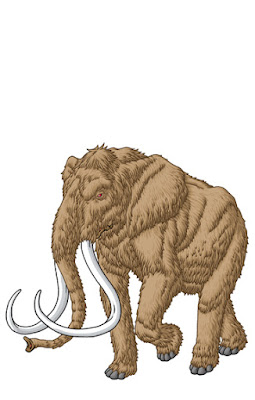 BAMMAT
"'The Bammat's something hairy-like, with big ears and a long wiggly nose and twisty white teeth sticking out of its mouth—'"

"'Oh!' And Mr. Yandro trumpeted his laughter. 'You've got some story about the Mammoth. Why, they've been extinct—dead and forgotten—for thousands of years.'"

"'Anyway,' he went on arguing, 'the Mammoth—the Bammat, as you call it—is of the elephant family. How would anything like that get up in the mountains?'"

"It was big and broad-headed, with elephant ears to right and left, and white tusks like bannisters on a spiral staircase. But it was woolly-shaggy, like a buffalo bull. The Bammat. How could such a thing move so quiet-like?"
Manly Wade Wellman, The Desrick On Yandro

WHAT THE ANCIENTS LEFT BEHIND 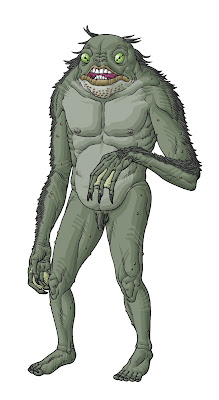 WHAT THE ANCIENTS LEFT BEHIND
"I knew whose hand it was, black-furry like a spider."

"That third one looked at first glimpse like a big, big man wearing a dark fur coat. Then you saw the fur was on the skin, with warty muscles bunching through. The head was more like a frog's than anything else, wide in the mouth and big in the eye and no nose. It spread its arms quiet-like around the shoulders of Reed Barnitt and Aram Harnam, and took hold with two hands that had both claws and webs."

"Their eyes piced up  thelantern light and shone green, like dog eyes."

"'The Ancients are dead,' spoke up Clay. 'Way I reckon, what's in there ain't no Ancients; just something the Ancients left behind.'"
Manly Wade Wellman, Shiver In the Pines 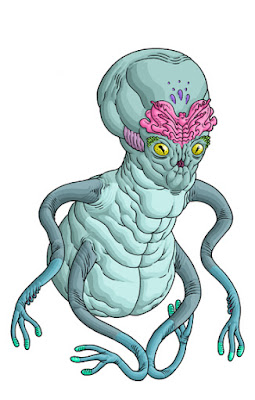 MARTIAN
“Like many Martians, he was braced upright on his lower tentacles by hoops and buckles around his bladdery body, so that he had roughly a human form, over which lay a strange loose armor of light plates. In the breathing hole of his petal-tufted skull was lodged an artificial voice-box that achieved words.”

“Behind them three Martian space-hands, sprawling like squids near the control-board, made flutelike comments to each other. The tentacle of each twiddled an electro-automatic pistol.”
Manly Wade Wellman, The Devil’s Asteroid