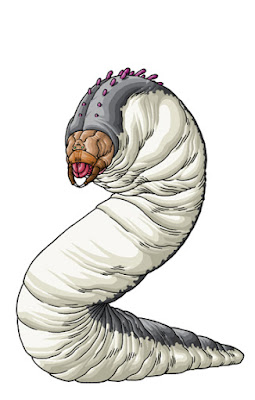 MOONCALF
"Of course it is hard for me now to say how much I saw at that time, because my impressions were corrected by subsequent observation. First of all impressions was its enormous size; the girth of its body was some fourscore feet, its length perhaps two hundred. Its sides rose and fell with its laboured breathing. I perceived that its gigantic, flabby body lay along the ground, and that its skin was of a corrugated white, dappling into blackness along the backbone. But of its feet we saw nothing. I think also that we saw then the profile at least of the almost brainless head, with its fat-encumbered neck, its slobbering omnivorous mouth, its little nostrils, and tight shut eyes. (For the mooncalf invariably shuts its eyes in the presence of the sun.) We had a glimpse of a vast red pit as it opened its mouth to bleat and bellow again; we had a breath from the pit, and then the monster heeled over like a ship, dragged forward along the ground, creasing all its leathery skin, rolled again, and so wallowed past us, smashing a path amidst the scrub, and was speedily hidden from our eyes by the dense interlacings beyond."
H.G. Wells, The First Men In the Moon 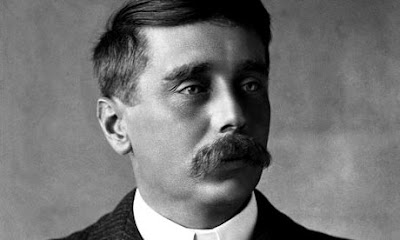 This coming Monday is H.G.Wells' birthday and I'll be celebrating again, with a new monster drawing! This time from his fantastic outerspace epic The First Men In the Moon!
Posted by Michael Bukowski at 10:00 AM 1 comment: