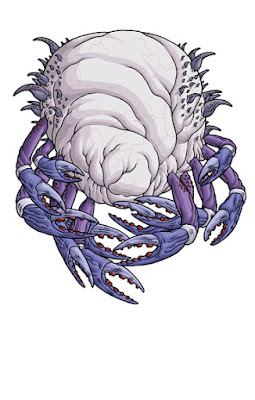 BLADDER DEMON
"Over him something hung in the air which looked like a gigantic bladder covered with countless crabs’ claws and scorpions’ stings, and with black clods of earth hanging from it."
Nikolai Gogol, The Viy 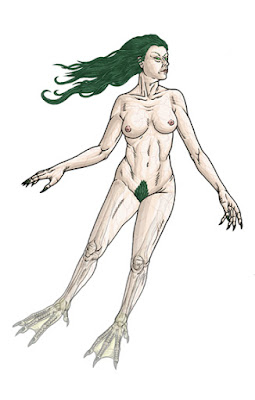 RUSALKA
"Maidens who have lost their souls rise up one after the other from the depths of the Dnieper, their green tresses stream over their shoulders, the water drips splashing to the ground from their long hair;"
Nikolai Golgol, A Terrible Vengeance

"'Look, look!' She said quickly, 'she is here, she is on the bank, playing games among my maidens, bathing herself in the moonlight. She is sly and cunning, she has taken the form of a drowned maiden;'"

"But they were pale; their bodies looked as thought molded out of transparent clouds, and it seemd as though the moonlight shone through them."
Nikolai Gogol, A May Night

"Descriptions of rusalki from all over Russia present them as attractive young women, insubstantial beauties with delicate, pale faces and translucent skin, an indication both of their ghostly nature and of their long residence deep under the waters of river or lake, far from the light of the sun. The rusalki often had green hair, like the water weeds and the grasses along the river banks where they frolicked on moonlit nights. More significantly, the rusalka wore her hair unbraided and uncovered, a state that the Russians associated with the supernatural -witches did not cover their hair either - or with liminality, for a bride's hair was unbraided on the eve or her marriage as was the hair of a dead woman in her coffin."
Elizabeth Warner, Russian Myths

Email ThisBlogThis!Share to TwitterShare to FacebookShare to Pinterest
Labels: A May Night, Nikolai Gogol 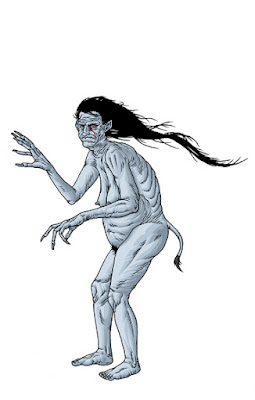 VED'MA
"It is not for nothing that God has given each some special peculiarity; the learned maintain that every witch has a little tail."

"'Every old woman is a witch,' said a grey-headed Cossack quite seriously"

"But she looked quite blue, and her eyes sparkled like fiery coals. She seized the child, bit its throat, and began to suck its blood."

"He even thought he saw a tear roll from under the eyelash of her right eye, but when it was half-way down her cheek, he saw it was a drop of blood."
Nikolai Gogol, The Viy

"More often than not there was little to distinguish the born ved'ma (witch) physically  from ordinary women. Her supernatural provenance might, however, be revealed by a small, furry tail, which grew longer as she matured."
Elizabeth Warner, Russian Myths 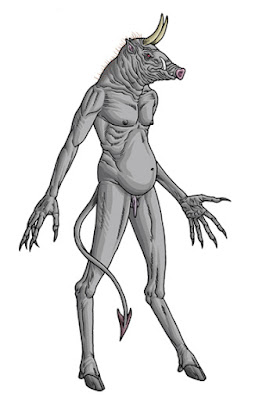 CHORT
"How could anyone let a devil into a tavern? Why, thank God, he has claws on his paws and horns on his head."

"But the pigs with legs as long as stilts climbed in at the windows and so revived him in an instant with a three-thonged whip, making him skip higher than this ceiling."

"The rest of the sentence died away on the speaker's lips: there was a loud rattle at the window, the panes fell tinkling on the floor, and a frightening pig's snout peered in through the window, roll it its eyes as though asking, "What are you doing here, folks?'"
Nikolai Gogol, The Fair At Sorochintsy
"In pre-Christian central and eastern Europe, the chort was a demon used to personify evil forces. He would be pictured as walking on two legs in an erect position, but with horns, hooves, a tail and often the bottom half of a goat. Sometimes he would have a pig face. Chorts would often live in hollow willow trunks or abandoned buildings, like mills. It’s the pre-Christian, pre-gentrified version of a savage, country-style devil.
Luiza Oleszczuk, European Folklore Rife With Halloween Costume Inspiration 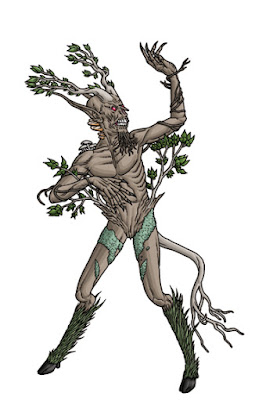 LESHII
"Those forests on this hill are not forests: they are the hair that covers the shaggy head of the wood demon."
Nikolai Gogol, A Terrible Vengeance

"Even today, no Russian living at the forest's edge will take the forest for granted."

"Many stories about him stress his affinity with the vegetation of the forest. His skin might be gnarled like the bark of a tree, his hair and beard green as grass."

"Iconographic influences may be detected in some descriptions of the leshii's appearance, which endow him with a shaggy body, cloven hooves, a tail and horns."
Elizabeth Warner, Russian Myths