Well, NecronomiCon 2019 has come and gone and I already can't wait til 2021. This year was the best one since Niels & co restarted it back in 2013. The panels, films, vendors and guests were all stellar. My only complaint was that there was so much cool stuff it was hard to pick what to do and what to skip. Here's a rundown of how spent the Con. 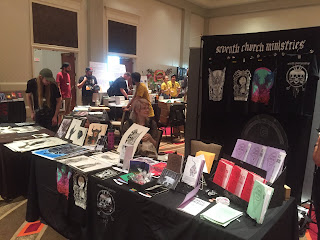 First off, Jeanne D'Angelo and I leisurely drove up from Philadelphia with Justine Jones and Tanya Finder. We stopped at Rosedale Cemetery in Orange NJ to see the graves of tennis champion Althea Gibson and workers rights heroes Quinta & Amelia Maggia. 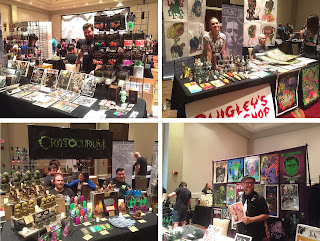 We then hightailed it out of there to see Robert Lloyd Parry perform two readings as M.R. James! He did the Ash Tree and Oh Whistle And I'll Come To You, My Lad with no microphone and lit only by 5 candles! It was fantastic and I'm so glad I got to see the performance.

The next day started with me on the very first panel of the con! It was called Scripturum Obscurum: Remarkable Unsung Authors and I, as promised, blathered about Margaret St. Clair and Charles Saunders. I was a little intimidated because the other panelists were pretty amazing. Fiona Maeve, Gemma Files, Leslie Clinger and Victor LaValle (go read his book The Changeling!) and they all suggested intriguing authors/books. The two most notable: Victor suggested Corregidora by Gayl Jones (about a woman who, after a hysterectomy, begins hearing the voices of her ancestors through the empty space in her abdomen!) and Fiona suggested Tentacle by Rita Indiana (a post apocalyptic epic with a voodoo prophecy and a transgender character that transitions with the help of a sacred anemone!).

After that we did what we came to do, we set up our table! We met two more weirdos that attached to our now mega-table, Stephen Wilson and Christian Degn. The vendor's room was great this year and was filled with spectacular artists: Yves Tourigny and Seventh Church Ministries collaborators Nick Gucker, James Quigley (aka Gunsho), Sam Heimer and Jason McKittrick (Cryptocurium)! Scott Nicolay, Anya Martin and Justin Steele were there at the Outer Dark table as well! He wasn't tabling but it was great to see Craig Gidney as he stopped by the table a few times to chat! 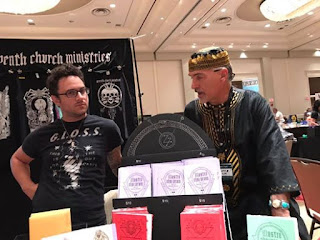 Myself and Scott Nicolay Photo by Matthew Bartlett

The next day we tabled then I was on another panel, this one about Manly Wade Wellman! Again, an intimidating crew. I was sandwiched between Nathan Ballingrud and Orrin Grey two authors whose work I love and respect. We had a great time and I think we got to shed some light on Wellman's works and adaptations.

Orrin Grey, myself and Nathan Ballingrud
Photos by Kevin Wilson


We also got to see two of the films that were being screened: Aniara, (Sweden, 2019: an extremely depressing space epic) and The Hellstrom Chronicle (USA, 1971: a somewhat faux documentary about insects framed as a horror movie). 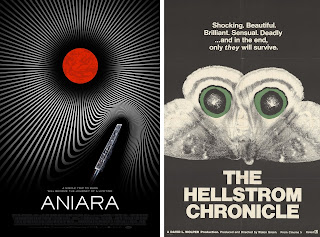 But probably my favorite part of the whole trip was hanging out with our carload of crudbags and Phil Gelatt & Victoria Dalpe who hosted us for the weekend. We stay with them every NecronomiCon and there's always the same cavalcade of sweet weirdos. Jordan Smith, Laura Maxfield, Andrea Sparacio (who did the cover and GOH illustrations in the Memento book!), Tim Mucci and Joseph E Dwyer. Usually we just see each other in the morning while chugging coffee or at night before we pass out, but this year we got some quality time and barbecued. Orrin Grey and Joshua Hackett were there and it was great to hang out with them not just on the vendor room floor. 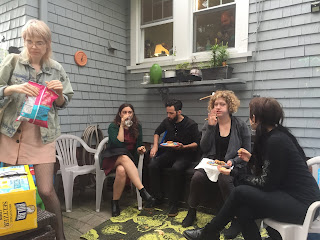 Regrets? You bet. There are tons of people I only got to see for seconds like Paul Tremblay, John Langan, Simon Strantzas and Matthew Bartlett. And I didnt even get to say hi to Silvia Moreno-Garcia or  Molly Tanzer (who's work I love). And of course I was super sad that Marcelo Gallegos, Skinner and Michael Wehunt didn't make it out. 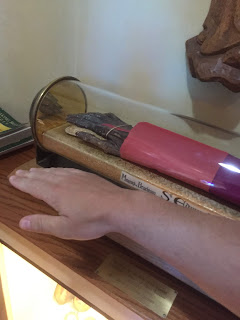 On the way back we managed to stop at Ender's Island, a beautiful Christian retreat that offers art classes and recovery treatment. They also happen to have the mummified arm of St. Edmund on site!

I had an absolute blast this year and I'm honestly sad that it's over. I was filled with inspiration and hope. Thank you to all the organizers and volunteers that make NecronomiCon go. Extra thanks to Niels Hobbs and s.j. bagley who are great people (and the organizers I personally know haha!). Also super special thanks to my amazingly talented, inspired, inspiring and supportive partner Jeanne D'Angelo who had her own amazing zines for sale but also talked to people about my work and calmed me down when I was stressing out about dumb stuff. She's also an excellent navigator.

PS-I sold out of a lot of things, but not all.
Stories From the Borderland III will go on sale in the Yog-Blogsoth store on Friday September 13th at 11AM EST!