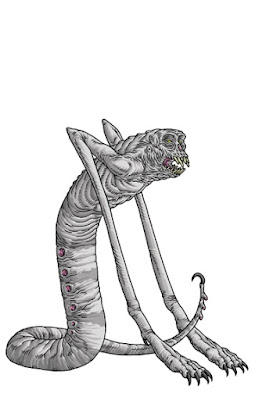 HUNTER FROM BEYOND
"What I saw was a forward-slouching, vermin-gray figure, wholly devoid of hair or down or bristles, but marked with faint, etiolated rings like those of a serpent that has lived in darkness. It possessed the head and brow of an anthropoid ape, a semi-canine mouth and jaw, and arms ending in twisted hands whose black hyena talons nearly scraped the floor. The thing was infinitely bestial, and, at the same time, macabre; for its parchment skin was shriveled, corpselike, mummified, in a manner impossible to convey; and from eye sockets well-nigh deep as those of a skull, there glimmered evil slits of yellowish phosphorescence, like burning sulphur. Fangs that were stained as if with poison or gangrene, issued from the slavering, half-open mouth; and the whole attitude of the creature was that of some maleficent monster in readiness to spring."
Clark Ashton Smith, The Hunters From Beyond 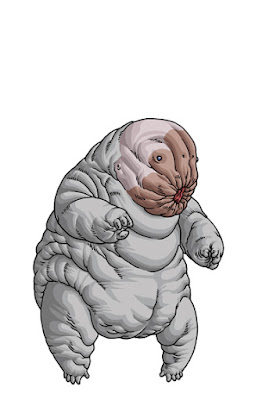 MAN WITHOUT BONES
"Come on, now," I said. "No one shall hurt you while I'm around. What are you afraid of?"

"You can kill them with your boot, or with a stick.… They are something like jelly. No, it is not really fear—it is the nausea, the disgust they inspire. It overwhelms. It paralyses! I have seen a jaguar, I tell you—a full-grown jaguar—stand frozen, while they clung to him, in hundreds, and ate him up alive! Believe me, I saw it. Perhaps it is some oil they secrete, some odor they give out … I don't know …"

Their chief, who had been a great man in his day, sign-writing with a twig, told us that he had strayed there once, and drew a picture of something with an oval body and four limbs, at which he spat before rubbing it out with his foot in the dirt.

I saw that the plateau was ringed with pairs of shining eyes … as it might be, a collar of opals; and there came to my nostrils an odor of God knows what.

"It was grey and, in texture, tough and gelatinous. Yet, in form, externally, it was not unlike a human being. It had eyes, and there were either vestiges—or rudiments—of head, and neck, and a kind of limbs."

Then, out of that stinking green twilight came a horde of those jellyfish things. They poured up the tree, and writhed along the branch.

Those boneless men do not bite: they suck. And, as they suck, their color changes from gray to pink and then to brown.
Gerald Kersh, Men Without Bones
Read Scott's blog-post about this story here.

Email ThisBlogThis!Share to TwitterShare to FacebookShare to Pinterest
Labels: Gerald Kersh, Stories From the Borderland 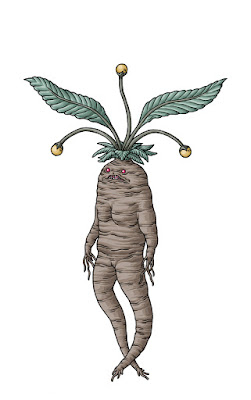 Hey folks! Just a quick news update before we get back to the monsters. I'm finally able to reveal a huge project that I worked on last year. It's the wraparound cover for Michael Wehunt's debut collection Greener Pastures. It's available for preorder now from publisher Shock Totem. 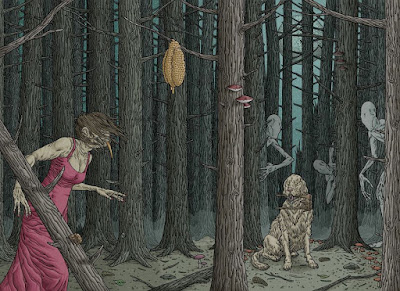 I also finished up the poster for the H.P. Lovecraft Film Festival & Cthulhucon in San Pedro CA. They currently have a Kickstarter going to raise money to fly some cool guests out. 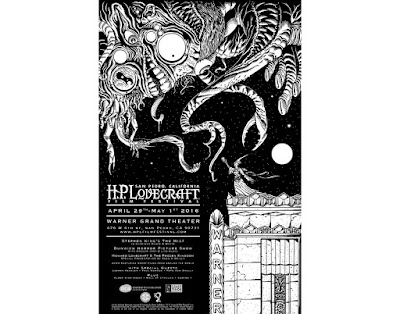 As far as upcoming monstrosities, I'll be posting a second round of my collaboration with author Scott Nicolay, Stories From the Borderland in a few weeks. I'll also have a Clark Ashton Smith "primer" zine that will be accompanying Cadabra Records vinyl release of S.T. Joshi reading some of CAS's poetry. So, expect to see some creatures from the back pages of the Book Of Eibon soon!

You should also head over to the Seventh Church Ministries site to keep up on new releases. There are a ton planned for this year, including Illustro Obscurum Volume IX! It's been over two years since I did a single volume of Illustro Obscurum, so I'm very excited!

Posted by Michael Bukowski at 10:40 AM No comments: