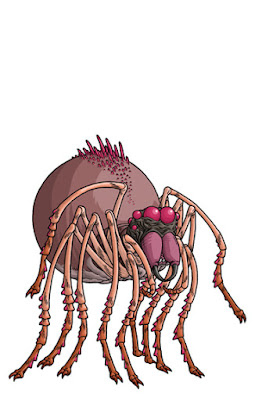 DEMON SPIDER
"As he turned from the rope, a large spiderlike creature scuttled from an overhead limb down the rope to where Jake's blood mixed with the hemp. The spider-thing lapped the fresh blood."

"The Creature changed. Became larger, dropped from the rope, curled on the ground, and changed more. When the transformation was complete, it moved quickly into the woods.

"Spidery legs broke the surface of the water-too many legs for a true spider, there were ten-wriggling. And then the bulbous body surfaced with them: a giant spiderlike thing with huge red eyes that housed some dark and horrid intelligence."

"The spider-thing opened its black hair-lined maw, and the boat sailed into its mouth, and as the bow of the boat and the boatman disappeared into the black stench of the creature, the Reverend lost sight of the red eyes, and then all he saw was blackness, and that blackness closed out the light behind him and he was one with hell--"
Joe R. Lansdale, Dead In the West 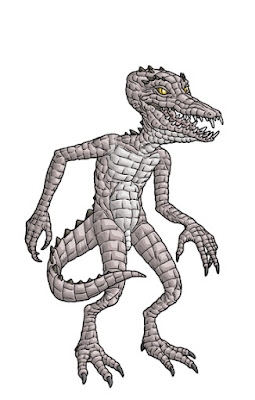 KOBOLD
"The footprints were wide and not too long and there were drag lines between them, like a heavy tail had followed suit."

'"They live deep insdie the earth. Like men, they like silver. Maybe for the same reasons men like it. I know very little about them, outside of what I've read about them in the Book of Doches."'

'"They're short, and they have tails," the Reverend said. Or some of them do."'

"They were about four feet tall and had wide almost lizard-like tails that dragged the ground as they went. Their eyes were yellow, like massive fire-fly asses. They were without clothes, and one thing was blatantly obvious. They were all male."
Joe R. Lansdale, The Dark Down There
Posted by Michael Bukowski at 10:00 AM No comments: 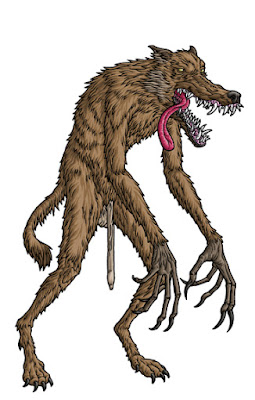 KING WOLF
"There was a hairy arm pushing up out of the ground, and then this long snout sheddin' dirt, and then this thing pulled its way out of the hole and wobbled up there on the edge of the grave. It was about seven feet tall. It was like a wolf, only it had a long snout and ten times the teeth. Them teeth hung out and twisted ever which way, and tall as it was, it was still bent some. But the eyes, that was the worst. They was as yellow as old custard, except when they rolled, 'cause then they showed a kind of bloody white around them."

"It was a male, that was obvious. Male like all the others, cause the thing that let me know they was all male was hanging out for all to see, long as a razor strap, thick as my ankle. And then it looked right at me."

"The King Wolf's ears flicked, its tongue came out of its mouth and licked at the air and lapped across its own snout."

"It stood on its hind legs and its cock and balls swung about when it moved as if they were a clockwork mechanism."
Joe R. Lansdale, The Gentleman's Hotel

THE THING DOWN THERE 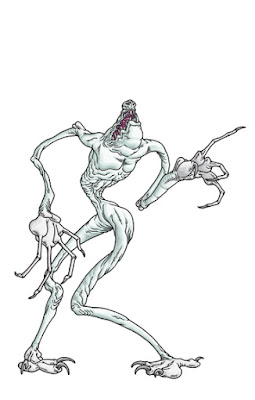 THE THING DOWN THERE
"It had spread its mouth wide, like a snake, and it had more teeth in its face than a dozen folk, and teeth more like an animal, and it was bitin' her head off."

"And then a hand, white and puffy like the petals of an orchid, appeared around the edge of the door, and fingers, long and stalk-like, extended and flexed, and the door moved and a flow of muddy water slid into the room along the floor."

"It moved strangely, as if made of soft candle wax. It was dead white of flesh, but much of the skin was filthy with mud. It was neither male nor female No genitals' down there it was as smooth as a well-washed river rock. It was tall, with knees that swung slightly to the sides when it walked, and there was an odd vibration about it, as if it were about to burst apart in all directions. The head was small. Its face was mostly a long gash of a mouth. It had thin slits for eyes and a hole for anose. At the ends of its willowy legs were large flat feet that splayed out in shapes like claw-tipped four-leaf clovers."
Joe R. Lansdale, The Crawling Sky 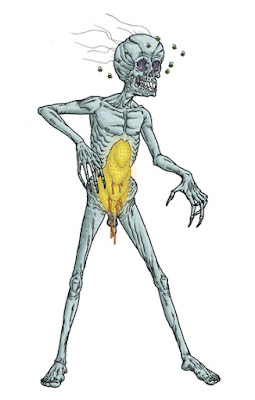 GRAVE CRAWLER
"His eyes had been torn out, or blown out is how they looked. Skin was peeled off his head, just leaving the skull and a few hairs. His chest was ripped open, and his insides was gone, exceptin' the bones in there. And them bees of his had nested in the hole in his chest, had done gone about making honey."

"He could see a hand on what appeared to be an impossibly long arm, reaching out to grab at the edge of the door."

"It sat on the window sill, crouched there like a bird of prey, a halo of bees circling around its head. The hive pulsed and glowed in its chest."

"Gimet's head sprouted a few springs of hair, like withering grass fighting its way through stone. A slight turn of its head allowed the moon to flow through the back of its cracked skull and out of its empty eyes. Then the head turned and the face was full of shadows again." 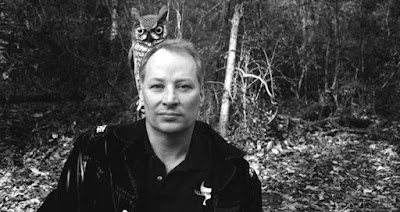 This coming Wednesday is Joe R. Lansdale's birthday. To celebrate, I'll be posting a weeks worth of creatures   from Lansdale's Dead In the West series. Lansdale is probably most famous for having penned the story behind Bubba Hotep but his range is wide and his is staggering. A master of the southern horror, comedy, crime and basically anything else he tries his hand at, Lansdale's love of Americana and characters drives his stories. His genre bending novel Cold In July was recently made into a movie of the same name by Jim Mickle and Nick Damici (the same team behind Stake Land, We Are What We Are, Mulberry Street and the upcoming series Hap and Leonard, which is also based on Lansdale's writing!) 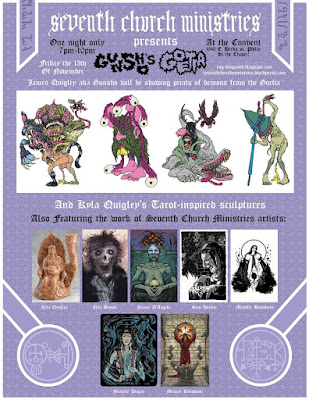 Seventh Church Ministries will be hosting the very first art show in the chapel of The Convent (1648 E. Berks St., Phila PA) ON FRIDAY THE 13TH OF NOV!

It's also our very first showcase! James Quigley will be the featured artist, showing his gorgeously gross demon prints inspired by the Goetia. Kyla Quigley will also be showing her Tarot-inspired sculptures (immediately after they've been shown at the NY Tarot Society!). On top of that Seventh Church Congregation members Alan Brown, Michelle Dugan, Michelle Krysztofiak, Jeanne D'Angelo, Sam Heimer and myself will be showing work that has appeared in or with our zines.
IT'S IN THE CHAPEL OF AN OLD CONVENT!!!!!!

Posted by Michael Bukowski at 10:59 AM No comments: