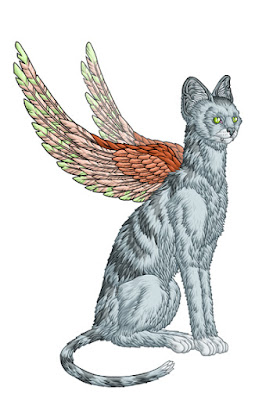 WINDSTEED
"The beast that bore her now down from the hills of Hallan was of finer breed, striped coat fitting sleek over hollow, buoyant bones, green eyes slitted against the wind, light and mighty wingssweeping up and down to either side of Semley, revealing and hiding, revealing and hiding the clouds above her and the hills below."

"The striped windsteed rose and stalked softly on thick, hollow-boned legs to the water's edge."

"'Windsteeds!' Then he looked up and saw them, three great gryphon-cats circling down up on them, claws outstretched, wings black against the hot blue sky."

"Half-starved and overladen, the wind-steed gasped at each lift and downbeat of its great barred wings."
Ursula K. Le Guin, Rocannon's World 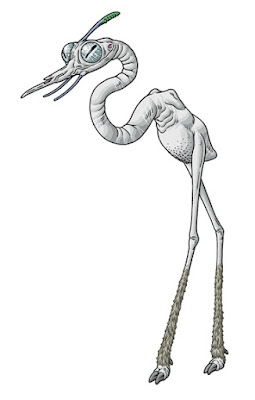 "Silent, angular, elegant, they nested in the drifts of red leaves among the roots, and fished for water creatures in the shallows, and gazed across the pool at human beings with large, round eyes as colorless as water."

"Like the gray heron of the Meeting Pool, there was a silence in her, a silence that drew him, drew him aside, toward a different center."
Ursula K. Le Guin, The Eye Of the Heron POUCHBAT
"Hari watched him with benign amusement, as if he were a pouchbat."

"Once every eight or ten years they flowered and bore a small edible fruit, the seeds of which were excreted by wotsits, pouchbats, farfallies, tree-coneys, and other fruit lovers."
Ursula K. Le Guin, The Eye Of the Heron 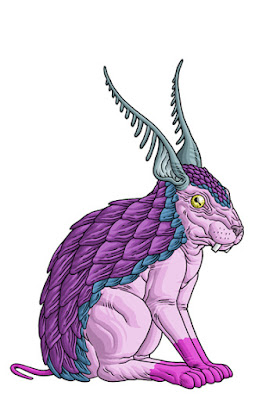 CONEY
"The biggest herbivvore was the coney, a fat slow rabbity beast with fine waterproof scales all over it."
Ursula K. Le Guin, The Eye Of the Heron 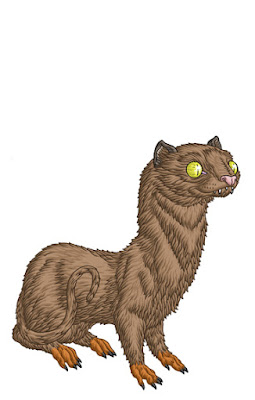 OTAK
“These creatures are found only on four southern isles of the Archipelago, Roke, Ensmer, Pody and Without. They are small and sleek, with broad face, and fur dark brown or brindle, and great bright eyes. Their teeth are cruel and their temper fierce, so they are not made pets of. They have no call or cry or any voice. Ged stroked this one, and it woke and yawned, showing a small brown tongue and white teeth, but was not afraid. ‘Otak,’ he said and then remembering the thousand names of beasts he had learned in the Tower he called it by its true name in the Old Speech, ‘Hoeg! Do you want to come with me?’”
Ursula K Le Guin, The Wizard Of Earthsea