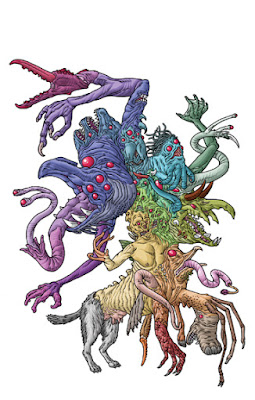 THE THING
"They haven't seen those three red eyes, and that blue hair like crawling worms. Crawling - damn, it's crawling there in the ice right now!"

"Three mad, hate-filled eyes blazed up with a living fire, bright as fresh-spilled blood, from a face ringed with writhing, loathsome nest of worms, blue, mobile worms that crawled where hair should grow -"

"But it did not seem of importance, of no more importance than the labored, slow motion of the tentacular things that sprouted from the base of the scrawny, slowly pulsing neck."

"The red eyes clouded over in a stiffening, jerking travesty of a face. Armlike, leglike members quivered and jerked. The dogs leapt forward, and Barclay yanked back his weapon. The thing on the snow did not move as gleaming teeth ripped it open."

"If it had reached the Antarctic Sea, it would have become a seal, maybe two seals. They might have attacked a killer whale, and become either killers, or a herd of seals. Or maybe it would have caught an albatross, or a skua gull, and flown to South America."

"If it didn't, it would become a dog - and be a dog and nothing more. It has to be an imitation dog."
"It tests negatively. Which means either they were cows then, or that, being perfect imitations, they gave perfectly good milk."

"The Thing screamed in feral hate, a lashing tentacle wiping at blinded eyes. For a moment it crawled on the floor, savage tentacles lashing out, the body twitching."
John W. Campbell, Who Goes There?
Read Scott's blog-post about this story here.
Posted by Michael Bukowski at 11:10 AM 5 comments:

Email ThisBlogThis!Share to TwitterShare to FacebookShare to Pinterest
Labels: John W. Campbell, Stories From the Borderland 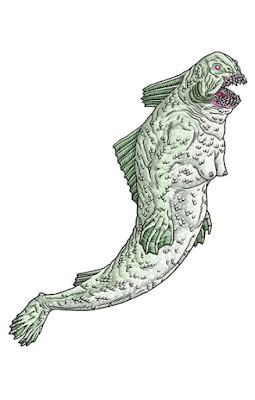 FEESTER
"Boneless pale creatures with ragged mouths full of teeth lived at the bottom of the lake. We called them feesters."

"Little Clio’s sturdy legs, just coming fully under her control, and much used for running and jumping, became traitors; they bent at odd angles and would not support her weight. Her bones were softening; not just in her legs, but all the bones of her body, becoming not bone but flexible cartilage or baleen. Her small, even teeth fell out and were swiftly replaced by new ones, twice as many as she had had before, crooked, crowded and pointed, changing the shape of her softened jaw. Her skin turned deadly pale, and then a sick frog-belly white. Her legs began to fuse together, and her arms to fuse to her sides. She seemed to believe that the pallid cylinders humping wetly across the floors of the dark house (dark because their great lidless eyes could not abide light) were still her four little girls, to be played with and sung to and tucked in at bedtime."

"'Why, I know all about them,” I said. “You told me yourself. Five-foot aquatic maggots with shark’s mouths. Members of the local gentry until The Curse of Hoog, Fish-God of the South Seas, fell upon them. Named for selected Muses. I’ve always wanted to meet a maggot named Polyhymnia.'”
Bob Leman, Feesters In the Lake
Read Scott's blog-post about this story here.

Posted by Michael Bukowski at 4:17 PM No comments:

Email ThisBlogThis!Share to TwitterShare to FacebookShare to Pinterest
Labels: Bob Leman, Stories From the Borderland 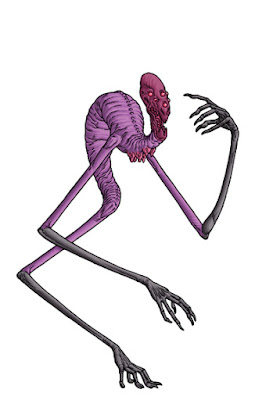 VOOM
"For a moment there was nothing to see. Only for a moment. Then two—or was it three?—long, blackish, extremely thin arms came out from the black car and fumbled with the glass in the window of the sedan. The glass was forced down. The arms entered the sedan."

"They threw it into the interior of the black car. The three arms invaded the sedan once more."

"There was a splintering crash, the sound of lath and plaster breaking. Freeman looked up from the unsigned agreement to see the last of his entrepreneurs—the last, the indubitable last—being borne off in the long black arms of Voom."
Margaret St. Clair, Horrer Howce
Read Scott's blog-post about this story here.

Posted by Michael Bukowski at 5:00 PM No comments: 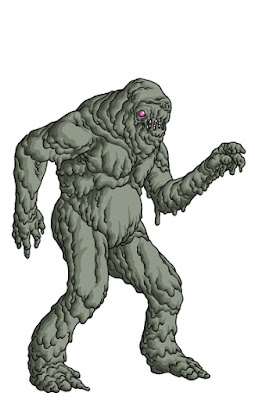 ROTTEN-SMELLING MAN
"Brenda knew at once that he was not like any other man she had ever seen. His skin was not black, or brown, but of an inky grayness; his body was blobbish and irregular, as if it had been shaped out of the clots of soap and grease that stop up kitchen sinks. He held a dead bird in one crude hand."

"He kept starting up the sides clumsily, clawing at the loose handholds, and sliding back. But his blobbish limbs were extraordinarily inept and awkward. He always slid back."

"The mockery in her tone seemed to cut through to his dull senses. He raised his grayish head. There was a flash of teeth, very white against their inky background. But he couldn’t get out. After a moment, Brenda laughed."

"He raised the .22 to his shoulder, clicked the bolt, and fired. Brenda’s little scream went unheeded in the whoosh of the shot. But the man from the quarry made no sign of having received the impact. He did not even rock. The bullet might as well have spent its force in mud."
Margaret St. Clair, Brenda
Read Scott's blog-post about this story here.

Posted by Michael Bukowski at 4:59 PM No comments:

THE THING IN THE DARK 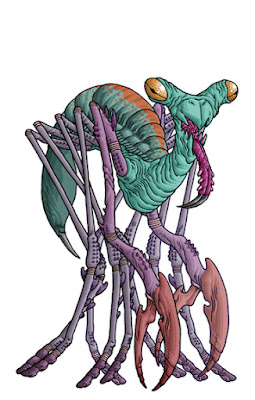 THE THING IN THE DARK
"It was as if, so the old man had declared in that solemn manner of his, 'as if the thing that was following could see perfectly in the darkness, and had many small legs or pads so that it could move swiftly and easily over the rock - like a giant caterpillar or one of the carpet-things of Kralkor II.'

"'Have you ever listened to a large insect crunching its prey?' he said. 'Well, it was just like that. I imagine that a crab makes exactly the same noise with its claws when it clashes them together. It was a - what's the word? - a chitinous sound.'"

"And the sides of that rock had been worn away as if it had been used as an enormous whetstone."

"He was coming out into the open plain once more, and somewhere not far away in the darkness was that enigmatic pillar that might have been used for sharpening monstrous fangs or claws. It was not a reassuring thought, but he could not get it out of his mind.For there could be no mistaking the rattle of monstrous claws in the darkness ahead of him."
Arthur C. Clarke, A Walk In the Dark
Read Scott's blog-post about this story here.

Posted by Michael Bukowski at 4:01 PM No comments:

Email ThisBlogThis!Share to TwitterShare to FacebookShare to Pinterest
Labels: Arthur C. Clarke, Stories From the Borderland 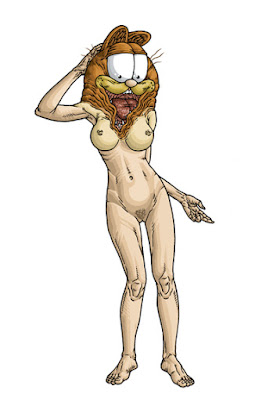 Travis: "OH NO! And I think you mispronounced Nermal. Reading Garfield books obsessively made me feel Nermal."

Griffin: "ummmm…To avoid feeling like a sicko I drew pictures of Garfield with a woman's (Pamela Anderson's body circa 1990) body and Garfield's head."

Travis: "Yeah cus that doesn't make him a sicko…go on."

Griffin: "So that I was assured that my obsession wasn't with animals or repressed homosexuality. This Garfield/Pam hybrid still had the same biting wit and acerbic outlook and tended to cut herself in self loathing while wolfing down a lasagna to fill the void after sleeping with drawings of a much more handsome and muscular version of myself. These drawings eventually evolved into erotic fan fiction staring Garfield and myself. In my head Garfield still has a woman's body but someone reading the stories would think I'm having sex with regular Garfield. I killed off John in a jealous rage. I didn't touch Odie, I enjoy his companionship and don't mind if he watches.

Griffin: "The stories are your pretty basic wish fulfillment stuff, balanced with the self loathing rants. I've been doing this for-"

Travis: "Yeah pretty basic stuff, nothing out of the ordinary here."

Griffin: "I've been doing this near daily for years and I have a substantial amount of writing in a folder I keep buried in eight different folders. My girlfriend stumbled across them by accident when it came up in a search and is pretty freaked out. How can I show her I'm just a 'Nermal' guy with a weird outlet for my psychological problems and not some kind of sicko. And they included a sample of some of the erotic fiction and I didn't think I would ever say this on this podcast but it's too gross to read out loud."

Justin: "So the days he has unconsensual sex with Garfield's head on a woman's body…does that happen on Mondays because that would definitely make a lot of sense."
My Brother My Brother and Me, Episode 108: Garfield Monstrosity
Click here to listen to the episode!