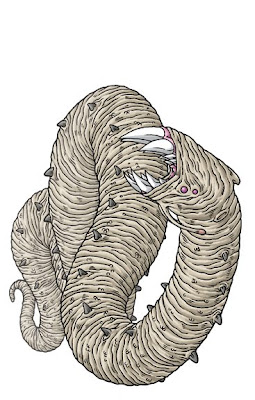 DHOLE/DOEL/BHOLE
"Below him the ground was festering with gigantic Dholes, and even as he looked, one reared up several hundred feet and leveled a bleached, viscous end at him."
H. P. Lovecraft & E. Hoffmann Price, Through the Gates of the Silver Key

"Now Carter knew from a certain source that he was in the vale of Pnath, where crawl and burrow the enormous bholes; but he did not know what to expect, because no one has ever seen a bhole, or even guessed what such a thing may be like. Bholes are known only by dim rumour from the rustling they make amongst mountains of bones and the slimy touch they have when they wriggle past one. They cannot be seen because they creep only in the dark."
H. P. Lovecraft, The Dream-Quest Of Unknown Kadath

Posted by Michael Bukowski at 10:10 AM

Email ThisBlogThis!Share to TwitterShare to FacebookShare to Pinterest
Labels: Bhole, Dhole, Doel, Dream-Quest Of Unknown Kadath, H.P. Lovecraft, Through the Gates Of the Silver Key