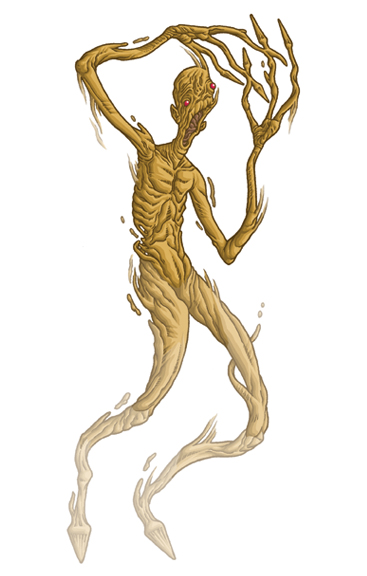 INTERDIMENSIONAL SPIRIT
"It was incredible, surely, but there, opposite and slightly above me, were shapes of some indeterminate sort among the willows, and as the branches swayed in the wind they seemed to group themselves about these shapes, forming a series of monstrous outlines that shifted rapidly beneath the moon. Close, about fifty feet in front of me, I saw these things."

"They first became properly visible, these huge figures, just within the tops of the bushes -- immense, bronze-coloured, moving, and wholly independent of the swaying of the branches. I saw them plainly and noted, now I came to examine them more calmly, that they were very much larger than human, and indeed that something in their appearance proclaimed them to be not human at all. Certainly they were not merely the moving tracery of the branches against the moonlight. They shifted independently. They rose upwards in a continuous stream from earth to sky, vanishing utterly as soon as they reached the dark of the sky. They were interlaced one with another, making a great column, and I saw their limbs and huge bodies melting in and out of each other, forming this serpentine line that bent and swayed and twisted spirally with the contortions of the wind-tossed trees.  They were nude, fluid shapes, passing up the bushes, within the leaves almost -- rising up in a living column into the heavens. Their faces I never could see. Unceasingly they poured upwards, swaying in great bending curves, with a hue of dull bronze upon their skins."

"For just as the body swung round to the current the face and the exposed chest turned full towards us, and showed plainly how the skin and flesh were indented with small hollows, beautifully formed, and exactly similar in shape and kind to the sand-funnels that we had found all over the island."

'"Their mark!" I heard my companion mutter under his breath. "Their awful mark!"'
Algernon Blackwood, The Willows