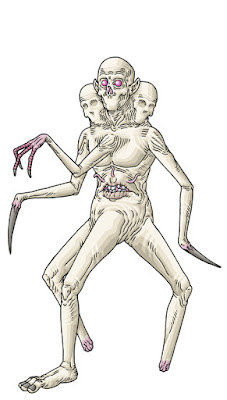 TIRAPHEG
"This tripedal hermaphrodite is 7' tall, naked and hairless. Its shape is human-like, but there are significant deviations from human form. The creature has three heads of which the outer two are featureless. The middle head has three large, deeply-inset eyes, two to the front, (above the nose as a human) and one to the rear; it has ear-like organs on each side, but no mouth."
"From the body of the creature spring three arms; the two at the shoulders are jointed in such a way that they can attack to the rear with equal facility as to the front of the body - these are prehensile limbs with a 6" long spike at the end of each. The third arm, emerging centrally from the chest, is like a human arm except that the hand has three strong fingers. Of the creature's three legs, the outer two are stumps and the central one has three unusually long and strong toes."
"The tirapheg's mouth is located in its belly below the central arm;"
Don Turnbull ed., Fiend Folio