THE KING IN YELLOW (HASTUR) 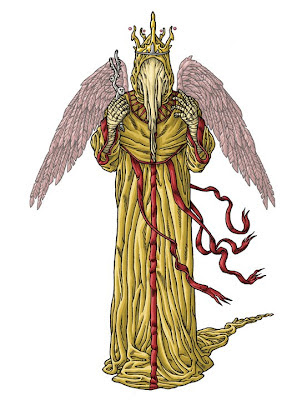 THE KING IN YELLOW (HASTUR)
"At the farther end was a high stone dais reached by five steps; and there on a golden throne sat a lumpish figure robed in yellow silk figured with red and having a yellow silken
mask over its face.To this being the slant-eyed man made certain signs with his hands, and the lurker in the dark replied by raising a disgustingly carven flute of ivory in silk-covered paws and blowing certain loathsome sounds from beneath its flowing yellow mask."

"Then the figured silk slipped a trifle from one of the greyish-white paws, and Carter knew what the noisome high-priest was. And in that hideous second stark fear drove him to something his reason would never have dared to attempt, for in all his shaken consciousness there was room only for one frantic will to escape from what squatted on that golden throne."
H.P. Lovecraft, The Dream-Quest Of Unknown Kadath

"Songs that the Hyades shall sing,
Where flap the tatters of the King,
Must die unheard in Dim Carcosa."
Robert W. Chambers, The Yellow Sign

"'The ambitions of Caesar and Napoleon pales before that which could not rest until it has seized the minds of men and controlled even their unborn thoughts,' said Mr. Wilde.
'You are speaking of the King in Yellow', I groaned with a shudder.
'He is a king whom Emperors have served.'"
Robert W. Chambers, The Repairer Of Reputations

Then I sank into the depths, and I heard the King in Yellow whispering to my soul: 'It is a fearful thing to fall into the hands of the living God!"'
Robert W. Chambers, In the Court Of the Dragon

Email ThisBlogThis!Share to TwitterShare to FacebookShare to Pinterest
Labels: Gods In Human Form, Great Old One, H.P. Lovecraft, Hastur, In the Court Of the Dragon, Robert W. Chambers, The King In Yellow, The Repairer Of Reputations, The Yellow Sign