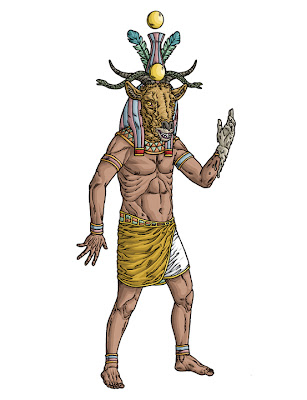 KHNUM
"For the cat is cryptic, and close to strange things which men cannot see. He is the soul of antique Aegyptus, and bearer of tales from forgotten cities in Meroë and Ophir. He is the kin of the jungle’s lords, and heir to the secrets of hoary and sinister Africa. The Sphinx is his cousin, and he speaks her language; but he is more ancient than the Sphinx, and remembers that which she hath forgotten."

"What was the land of these wanderers none could tell; but it was seen that they were given to strange prayers, and that they had painted on the sides of their wagons strange figures with human bodies and the heads of cats, hawks, rams, and lions. And the leader of the caravan wore a head-dress with two horns and a curious disc betwixt the horns."
H.P. Lovecraft, The Cats Of Ulthar

"Khnum, one of the oldest gods of Egypt, came from the area of the First Cataract, to the far south. He became associated with the annual Nile flood, which seemed to originate from his domain. As a symbol of fertility which the flood brought, he was depicted with the head of a ram and given the role of a creator-god. A temple of the Roman period portrayed him as creator of all, even the other gods."

"Khnum created the human race from clay, which he made by mixing earth and
water with air."
Charles Freeman, The Legacy Of Ancient Egypt

"Khnum was self-created and the maker of heaven, raising it on its four pillars. He was also the maker of the underworld and of water, of things which are and of thing which shall be."

"Khunum was represented as a man wearing the head of a ram with horizontal wavy horns, or as a ram standing on its hind legs, which was called the 'living soul of Ra'."
Veronica Ions, Egyptian Mythology