Hey folks! So, Illustro Obscurum sold out really, really fast despite paypal problems. Because of that, everyone that stuck with it and purchased a copy during that annoying period got a special original drawing with their copy!

If you follow this blog, you know I like to redraw stuff. Mostly because of the fast pace I set for myself, as time passes I realize there are things I could do better with a certain drawing or I have a better understanding of the creature based on other information. The drawings everyone got are the first time passes at monsters that have been redrawn. Some of them are from when I first started this project (as a one time show not a continuous blog) four years ago, so they may not be too good, hahah. Anyway, what I'm trying to say is, thanks!

Everyone's zines (preorders and stand alone, domestic and international) went out yesterday December 11th, much to the chagrin of the 8 people behind me at the post office (37 packages, ugh!). It was late in the day so they probably won't start their journey to you until today.

Also, since it's been a while, here are two sketch/completion comparisons... 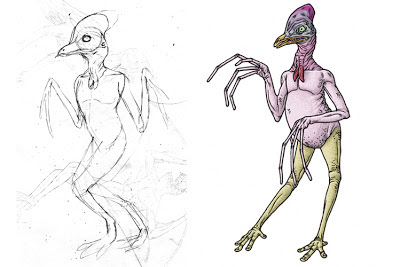 This first one changed a little bit but mostly just in posture. The general idea is still the same. 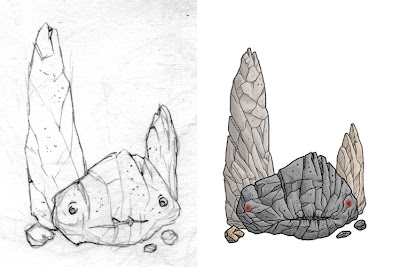 This guy is almost exactly the same as his sketch....adorable!

In other news, I'll be back on schedule and posting a full week's worth of new guys next week (two new and 1 redraw that was done to fix line work/color and 2 awesome redraws that are just cooler than the old versions). Jeanne and I are going to the Czech Republic and Slovakia for Christmas and New Years so, I'll be absent for a bit, however, I will have a special holiday post on Christmas day...it will NOT be safe for the dinner table.

Again, thanks!!
Posted by Michael Bukowski at 10:51 AM