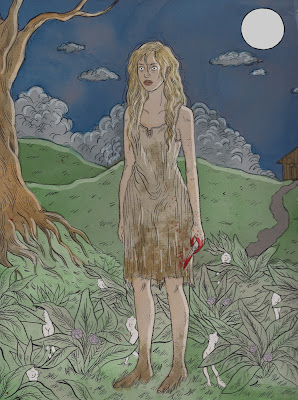 SABINE
"Gilies Grenier the sorcerer and his wife Sabine, coming into lower Averoigne from parts unknown or at least unverified, had selected the location of their hut with a careful forethought."

"The hut was close to those marshes through which the slackening waters of the river Isoile, after leaving the great forest, had overflowed in sluggish, reed-clogged channels and sedge-hidden pools mantled with scum like witches' oils. It stood among osiers and alders on a low, mound-shaped elevation; and in front, toward the marshes, there was a loamy meadow-bottom where the short fat stems and tufted leaves of the mandrake grew in lush abundance, being more plentiful and of greater size than elsewhere through all that sorcery-ridden province. The fleshly, bifurcated roots of this plant, held by many to resemble the human body, were used by Gilles and Sabine in the brewing of love-philtres."

"He had killed her one evening in autumn, during a dispute of unbearable acrimony, slitting her soft, pale throat in self-defense with a knife which he had wrested from her fingers when she lifted it against him. Afterward he had buried her by the late rays of a gibbous moon beneath the mandrakes in the meadow-bottom, replacing the leafy sods with much care, so that there was no evidence of their having been disturbed other than by the digging of a few roots in the way of daily business."

"It appeared to issue from a strange, half-withered root, cloven in the very likeness of a woman's body and legs — a root that was partly pale, and partly black with cauldron-smoke. One of the constables thought that he recognized the voice as being that of Sabine, the sorcerer's wife. All swore that they heads the voice clearly, and were able to distinguish these words:
"Dig deeply in the meadow, where the mandrakes grow the thickliest."
Clark Ashton Smith, The Mandrakes
Illustration by Jenn Woodall